As described in the title, I'm looking for a plain language phrase that means solid, dependable and established technology. The phrase I'm struggling to recall was I'm reasonably certain a two word phrase that might have terminated in something like era or period.

I think I've read it most recently in relation to Space Exploration, where it is used when the author wishes to make the point that the next steps can be undertaken without requiring new technology to be developed.

I think the phrase relates to a time period, "something era" for example.

To use it in a sentence; None of this is new, it is all {Insert Phrase} technology.

I think I read the same book you did, and the phrase you’re looking for struck me as it struck you, and has stuck with me:

The Case for Mars: The Plan to Settle the Red Planet and Why We Must, by Robert Zubrin, published by Simon and Schuster, 2012.

In it Zubrin describes the steps needed for human habitation on Mars, starting with the first and most critical step: manufacturing propellant for liftoff and return for the first visitors (because carrying enough fuel for the return trip from Earth is prohibitively expensive to lift out of Earth’s gravity well). 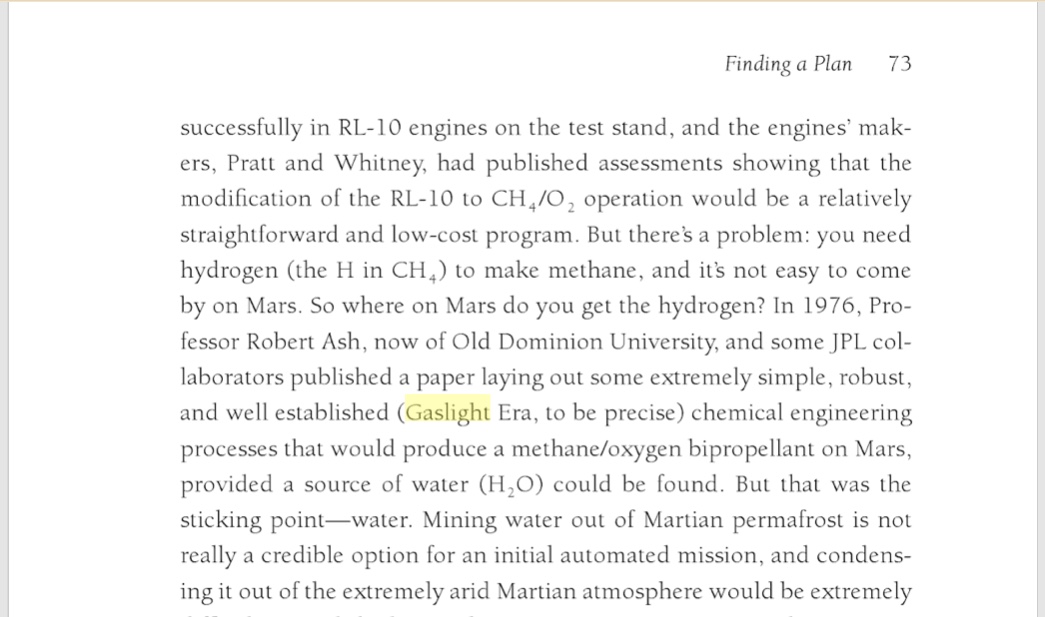 In 1976, Professor Robert Ash, now of Old Dominion University, and some JPL collaborators published a paper laying out some simple, robust and well established (Gaslight era, to be precise) chemical engineering processes...

So I think what you’re looking for is:

But I want to offer a caveat here: this is not a standard or generic term for any proven technology.

Instead, he’s saying for this specific purpose — manufacturing propellant in situ — the techniques developed and perfected during the 19th century by the first wave of “modern” scientists who discovered chemistry, would be sufficient for the purpose.

The goal of the book is to make a clear case that Mars can be settled in a practical and realistic way. Part of that is recognizing that some of the most critical processes don’t require “future tech”, or even high tech, and can be done on a [reasonable] budget.

In other words, the argument behind the phase in this context is:

The same fuel that those pioneers created processes to efficiently and effectively manufacture from simple ingredients, sufficient to move the world from candlelight to gaslight, to illuminate this world, in a sense, is also fuel sufficient to get our astronauts home from another world altogether.

This seems the most apt phrase to use in this situation. (Three words not two, but then one is a conjunction.)

Tried and true is another way to plainly state some ting is reliable. Gaslight is an old psychological suspense mystery film. Most of the use of the word in current media is figurative.

KitsuneKitsune
1
1
Add a comment  |
Highly active question. Earn 10 reputation (not counting the association bonus) in order to answer this question. The reputation requirement helps protect this question from spam and non-answer activity.

4
Phrase for a problem that seems impossible, but actually has a simple and obvious solution?
3
Is there a word or phrase to describe the aging of graphics technology?
0
Word/phrase for "staring at two things alternately"
2
Gentle word or phrase meaning ignorantly happy?
14
Word meaning "to begin simple but to become complex"
4
Is there a word/phrase for "reliable in the long run"