Is the word best monomorphemic?

I'm not too sure about this. Can someone please help?

Analysis of "morphemes" is pretty complicated, so it may not be possible to get a definite answer that applies to all frameworks. But based on my understanding, I would say that best is not monomorphemic. Here are two arguments I can think of:

In Universals in Comparative Morphology, by Jonathan David Bobaljik (Draft, January-February 2011), the comparative "better" is described as a morphologically derived form:

in the realm of root allomorphy, and directly relevant to the rest of this book, the Elsewhere Condition forces a contextually-restricted allomorph (10g) to block insertion of a context-free allomorph of the same root (10h), when the context for insertion is met, as in (11e). This derives bett-er, rather than *good-er as the comparative of good.

Bobaljik's discussion of how to deal with forms like worse (which doesn't end in the suffix -er, or anything that looks much like it) may also have some useful information about the different ways irregular comparative and superlative forms can be analyzed:

On the one hand, the general structure of comparatives [[ ADJ ] CMPR ] can be maintained even for the worse case, but with mutually-conditioned contextual allomorphs: BAD → worse /_] CMPR, and CMPR → Ø / ]A⁺_], where A⁺ = worse,less. This approach would preserve the structure for English comparatives unchanged even for the portmanteaus, and essentially recapitulates history, where the deletion of -er had a phonological motivation. Note that the overwhelming majority of root suppletion is of the bett-er type, preserving derivational and inflectional morphology beyond the root. On the other hand, one could treat the exponent worse as a true portmanteau, spelling out both the root and the comparative elements: BAD, CMPR → worse, inserted at the top node in (13c). Radkevich (2010) proposes to allow insertion at non-terminal X0 nodes in exactly this way (see also Neeleman and Szendrői 2007, Caha 2009), with a specific proposal as to how to restrict application of this mechanism to avoid overapplication. Equivalently, an operation of Fusion may be invoked (Halle and Marantz 1993, see also Bobaljik 1997, Chung 2007b) to combine the two terminals in (13c) into a single node prior to the application of rules of exponence.

As it happens, there is perhaps an argument in the domain of comparatives for treating (some) portmanteaus as complex exponents (either with fusion, or insertion at complex nodes) rather than a conspiracy of mutually conditioned allomorphs. The argument has to do with the locality conditions mentioned above. Recall from section 1.1 that alongside suppletive patterns like good – better – best (with a common allomorph in the comparative and superlative), patterns are also attested with three distinct root allomorphs, such as Latin bonus – melior – optimus ‘good – better – best’.

Here is the diagram mentioned in the quote: 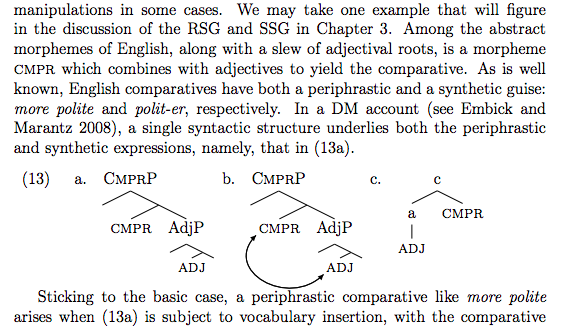 Not the answer you're looking for? Browse other questions tagged morphemes or ask your own question.

2
How many morphemes in words most/worst

12
Can foreign words be reduced into English morphemes?
2
number of morphemes in “liver”
7
Is the correct pronunciation of “Have you seen Mary's book” “Mary book”?
0
Why isn't {-able} considered a free morpheme?