Miss Marple and the “angels” of theatres

I recently happen to rewatch the 1964 movie “Murder Most Foul” and noticed that on a couple of occasions Miss Murple refers to the so called “angels”, that is, as she is explains, wealthy individuals who finance theatrical productions that run the risk of being shut down. Her last line in the movie is:

"Mr Cosgood, whatever else I am, I am definitely no angel."

In the more contemporary expression, the one I am familiar with, angel investors , refers affluent individuals who provide capital for business start-ups. Checking its origin it appears that the latter derives from the former:

While the contemporary meaning appear to be from the late ‘70s.

Google Books shows usage of angel investor/investing only from the early ‘90s , often with reference to digital start-ups.

TL;DR: The phrase is common and familiar within the theatrical world. It dates from at least the 1880s in the US, and was in use in the UK soon after that.

Yes; the use of "angel" to mean an investor in the theatrical world is quite common and venerable. It shows up in lots of old movies set on Broadway, for example. One such example off the top of my head is 1933's 42nd Street, where the star's sugar daddy is financing the play; when he finds out she's two-timing him and wants to pull his support, the cast and crew try to sweet-talk:

And a quick Google or news search for "theatrical angel" or similar will turn up plenty of contemporary examples, as well. For instance (emphasis added):

The economy has dropped faster than a falling angel, and investors for live performances are growing ever more scarce. . . . So Ms. Clarke returned to the phone, desperately seeking a theatrical angel. . . .

Ms. Clarke said: “Rhoda Herrick [the investor they found] came like a genie in a bottle, after four years of bloodied knees and scratched elbows. In this economic disaster, that this woman had the interest and ability to give this piece a life — it’s kind of like a fairy tale. I pinched myself that I had somebody who believed in the project.”

Ms. Greenwood piped up, “That’s why they call them angels.”

The earliest example I have been able to find is also from the New York Times, from late in 1884:

The general run of out-siders who put up dollars for theatrical enterprises very promptly show their right to the title of backer by backing out at the first symptom of loss. But now and then a plucky financier makes his appearance in this field. . . . Nobody knows how much solid cash Mr. Weed deposited in the venture. But he apparently had no regrets. It is customary for gentlemen like Mr. Weed and Mr. Williams to be alluded to by theatrical people as “angels.” Mr. Weed was called Frederick Bock's angel, Mr. Bock being his experienced partner in the various enterprises which cost all the money. By the same token Mr. Williams has enjoyed the celebrity of being generally alluded to as Mr. Tillotson's angel. That distinction certainly ought to be worth a part of the $36,000 Mr. Williams is said to have parted with since last Spring. Many capitalists would be glad to assure themselves of angelic surroundings at that price.

—"Manager, Actor and Play; A week at the theatres to give thanks for." The New York Times, Sunday, November 30, 1884 (unfortunately paywalled; if you aren't a subscriber, your local or institutional library may have access)

The assertion that it was "customary" to refer to investors as angels suggests that the term was not new in New York theatre circles even in 1884.

An early UK use and attribution can be found in an 1890 letter to the editor of The Scots Observer (emphasis added):

My newsagent informs me that Mr. George Moore has lately been in labour in the pages of a God-gifted paper called Short Cuts, with a proposal for a national subsidised theatre. All he wants is an Angel—(Mr. W. D. Howells's word for a millionaire capitalist, God bless him !)—with £10,000 a year to throw away.

Although this usage is in a publication from the British isles, "Mr. W. D. Howells" in this case almost certainly refers to William Dean Howells, described in Wikipedia as

Howells spent the first half of the 1880s in England and Italy, just a few years before the Scots Observer article. And in fact, in one of Howells' own works, published in the US in 1889—a year before the letter above—we find this exchange (emphasis added):

“It will take a great deal to get such a thing going; and even if he's got an Angel behind him——”

She caught at the word: “An Angel?”

“It's what the theatrical people call a financial backer. . . .”

By 1894, the term was in wide enough use in the American theatrical world to be used to define other terms; in The Showman's Encyclopedia we find this entry (bolding original, italics added):

Sucker. An inexperienced backer of a theatrical enterprise; an angel; a grafter's victim.

—The Donaldson Guide . . . , in conjunction with The Showman's Encyclopedia . . . , and the International Professional Register . . . , to which is added The Complete Code of the Donaldson Cipher, W.H. Donaldson, Ed., Cincinatti, Ohio, U.S.A., 1894

Given the 1890 Scottish attribution to an American and the apparently commonplace use of the term by "theatrical" Americans by the late 1880s/early 1890s I think it is likely that this is indeed an originally American usage, probably coined somewhere in the 1870s or early 1880s (but possibly earlier), which very quickly made its way across the Atlantic, no doubt aided by the long history of intercourse and collaboration between "theatrical people" from the US and UK.

The Letters of Mildred's Mother to Mildred, by E.D. Price, published in 1901 in New York, has a letter, sent from Minneapolis, titled: Mother and the Theatrical Angel. The letter describes a young Mr Carruthers, who is a financial backer of a theater production.

So we have some evidence of usage as early as 1901 in American English. There are several occurrences of the term theatrical angel between 1901 and 1930 in the American press (Cosmopolitan, Everybody's Magazine, Theatre Magazine, which is published in New York, despite the British spelling), but I can't find an early British example. That doesn't mean there isn't one.

I found an early (but not earlier) use in the British press:

A " theatrical angel" is probably called because his money has wings and flies.

BUT.. the Brits attribute it to the Americans:

But I can but acquaint you with the mere fact that in American theatrical parlance "angel" is used to describe the gentleman who puts up the money for the show.

The earlier uses of theatrical angel I found (on either side of the Atlantic) refer to a heavenly being rather than a financial backer. This is just what I was able to find, though.

William Ellis Horton (1848-1932), known contemporarily as "Judge Horton," was a vaudeville actor and manager in the 19th century. In his later years he became known in theater circles as an archivist and collector of information about the theater and theater people. He lived in New York and Los Angeles, but eventually settled in a hotel in Detroit.

In both of these books, he included a section documenting theatrical slang. His books strongly indicate that the use of the term angel to refer to one who monetarily supports a theater or a show had its origins around the turn of the 19th century. The latter book borrowed heavily from, and expanded on, the earlier one, so I'll only quote from the former (emphasis mine):

During the last few years a number of new words and expressions have been coined and added to the bulky dictionary of theatrical slang.

To those in professional life a successful production is a "hit," and a failure is a "frost." In referring to good business it is said "we stood 'em up," and being denied professional courtesies by a manager is called "turned down." An outsider who backs a show is an "angel," the smaller cities are "jay towns," and the manager of a country opera house is always addressed as "Frohman."

The November 17, 1901, Sunday (Syracuse) Herald, predating Horton's books, contains the same quote from him that includes his "angel" definition: 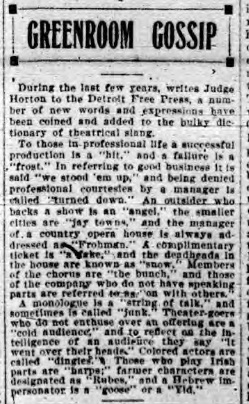 He had been thinking about writing a book as early as 1900, as is claimed in a thousand-word biography in the April 22, 1900, Sunday (New York) Telegraph that, among other things, calls him "the actor's friend" and "a man of wit." This was written when Horton was musing about writing a book about the theater -- which materialized as the two books linked above.

In summary, while Judge Horton may not have coined the term angel himself, he surely had a part in popularizing it through his writings.

2
What are the roots on the verb 'to miss' come from?
1
What's the origin of the idiom "miss the boat"?
5
What was the first use of the saying, "You miss 100% of the shots you don't take"
18
Origin of "skin in the game"
2
The Cat Out of The Bag
17
Does the telecommunication “last mile” derive from the jail “last mile”?
2
Why do the British “swear blind” while Americans “swear up and down”?
2
Earliest usages of the literal and figurative sense of “window dressing”
4
What is the meaning and origin of the expression "Miss Thang"?
1
What is the origin of the phrase "play a part/role"?