Does calling a road 'wavy' convey its shape clearly?

There is a scene in which the road the car is on is straight at first, but later starts to wave about. By 'wave', I mean its shaped like this: 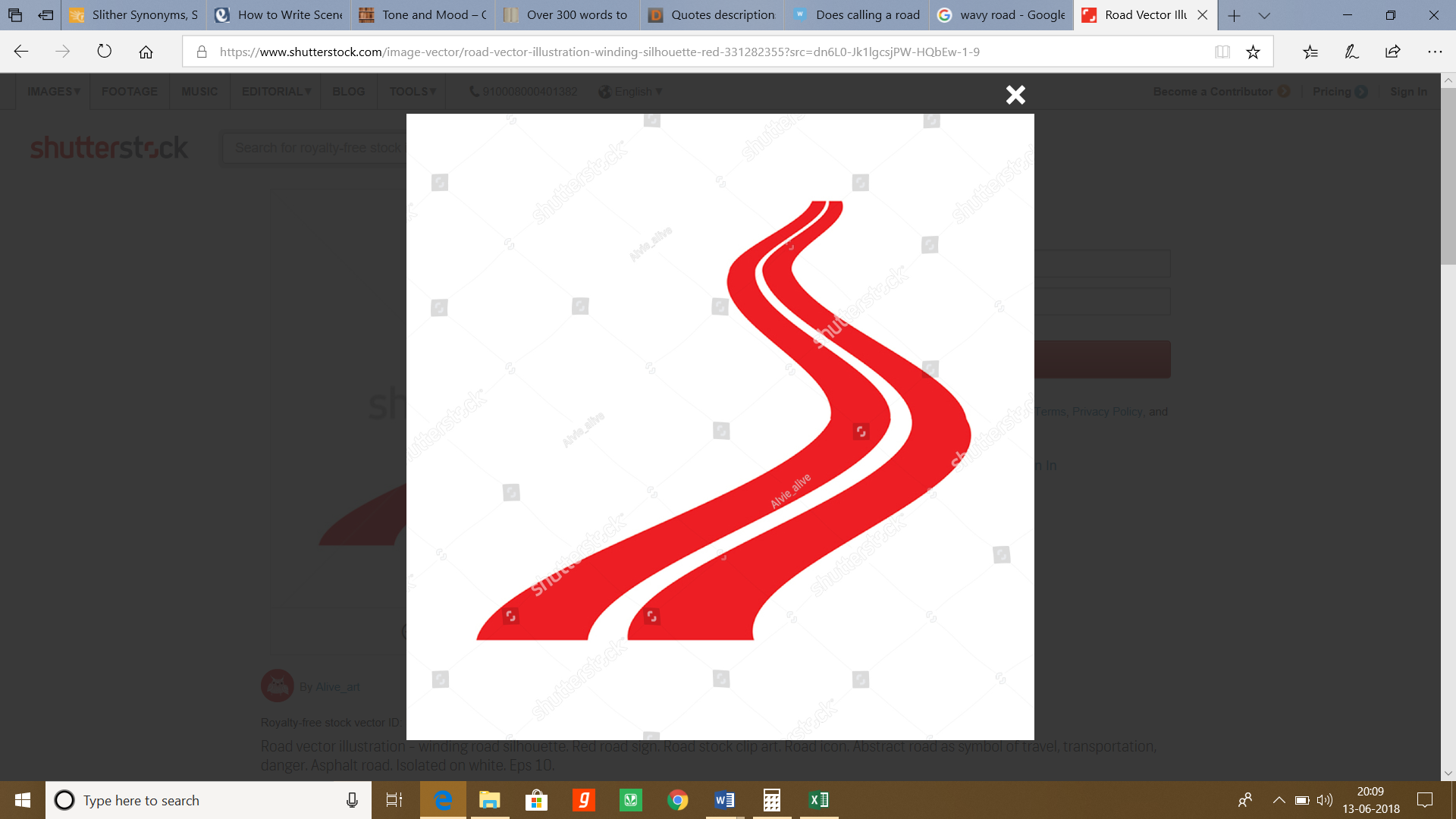 Now my question is, if I write, "the road ahead started to wave a little bit," does it convey clearly the shape of the road? If not, what could be some other ways I can structure the sentence or should I, perhaps, use a different word altogether? Thanks.

A single bend in a road is, well, a bend or a curve. Multiple curves back and forth is a winding road. Wavy would imply it's moving somehow. The first example that comes to mind is in Tolkien, and of a stair/path. Here he describes it as snaking to and fro. This isn't a bad way to describe it if you want a darker or more ominous tone.

The Winding Stair did not delve into the mountains of the Ephel Dúath; instead the cliff-face sloped back and the stairway snaked to and from across it. At one point one of the turns overlooked the vast ravine at the head of Morgul Valley.

EDIT: Here's another example, one of many you can find with a Project Guttenberg search. This is from the opening of A Lady's Tour in Corsica:

The road is less interesting than usual in Corsica, and, for some distance, is almost tame, winding amongst low green hills, and by the side of a foaming river swept by willows.

There are no results for "wavy road" in project guttenberg, and a google news search shows results that are puns (kanye west waving... a long and wavy road), usage by what appear to be non-native speakers, or roads that look like the images @computercarguy posted below: 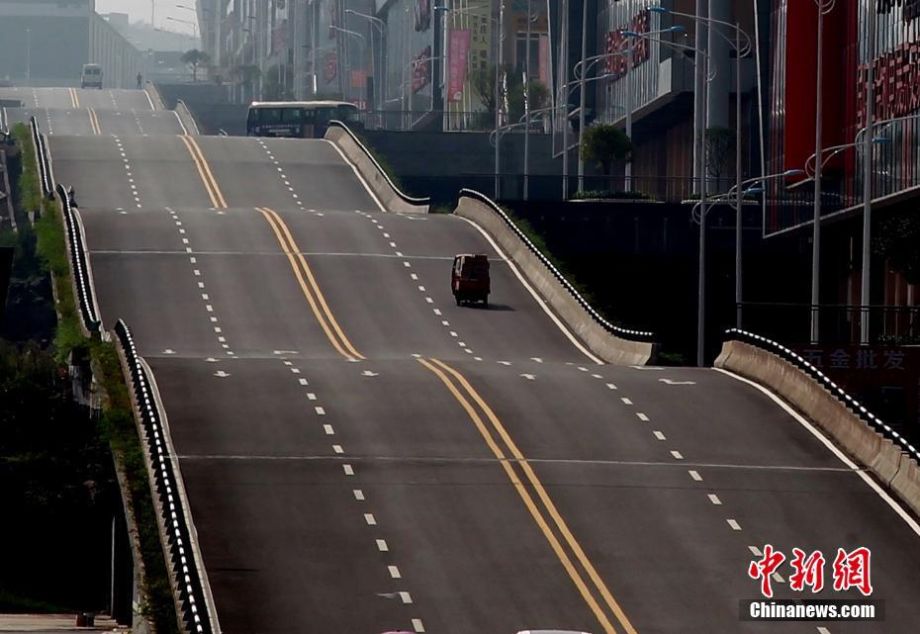 I would avoid "wave" and associated words - they will mean different things to different people. Did it move up and down like the sea (probably not) or did it raise a hand in greeting or farewell (I'm guessing it didn't). Silly examples maybe, but without your illustration I wouldn't have been sure what was meant.

Words like bend, curve, twist, turn would probably serve better, but if you're looking to convey the idea that the road really was like the symbol, you could play with that :

The previously straight road started to twist into a parody of the sign for dangerous curves.

You could also work in words like "tortuous" or "convoluted", but that will depend on whether they fit the type of story and its target audience.

I would have a bit of fun coming up with different ways to describe it, and see which one looked like it worked best.

With your illustration, I would call that a bend in the road. If there's more curves than that, it would be considered curvy. If it's a road that is just completely full of unequal curves/bends, it could be considered winding.

I've seen roads with straight sections, curvy sections, and winding sections, so a road doesn't have to stay one way or another.

IMO, wavy would tend to mean that the road goes up and down. This can be something with a series of hills or dips/rises in the road, or it could be a defect in the road. 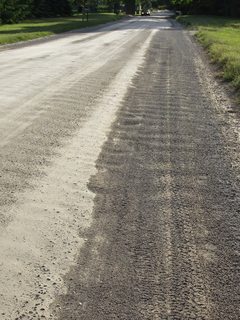 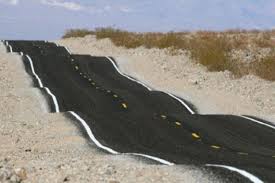 The picture on the left is a gravel road that is damaged by the amount of traffic stopping repetitively at that spot. I used to live in the country, and almost every intersection that had a stop sign was like this for 20-50 feet before approaching the stop sign. IDK how it happens, something to do with how brakes work (even before anti-lock brakes), but it does. As Carl mentioned in the comments below, this is called "washboarding". This is what I think of when you mention a wavy road.

The picture on the right is of a road that has a bunch of depressions and rises.

In that word structure you could write:

The road ahead started to wend.

It gives the feel that the road ahead isn't quite getting on with the job of getting you there.

I think I would use the phrase "twist and turn".

Your title (which I saw before the picture) certainly conveyed something like your picture to me, but your later use of "the road started to wave" gives a very different impression! It made me picture something akin to the road flapping about like a flailing tube man.

If you do want to use "wavy" I'd say "the road began to become wavy" or something along those lines (though there are good alternatives already here), and avoid more strongly implying that the road moves by saying it waves.

(Disclaimer: I had a recent bad experience driving up a painfully narrow and twisty mountain road that tortuously zig-zagged its way up multiple switchbacks. YMMV.)

If a road was described as wavy I would consider that a criticism not of the path the road took, but of the quality of the paving, pitted, perhaps buckled in places, rutted from heavy traffic or pushed up by encroaching tree roots.

By the way, questions about the meaning and usage of specific words are pretty common on the English Language & Usage stack exchange site; that stack already has a question about good words to describe such a road.

I think you're thinking of:

The road ahead started to weave a little bit.

If you want to demonstrate a creative use of an active verb that shows a mastery of plain language, try:

The road snaked back and forth across the landscape.

Used as a verb, 'snake', according to Webster, means "to move or extend with the twisting motion of a snake."

37
What do you call a road that goes up and down?

7
Does "needless to say" convey to the reader that he is ignorant?
4
Does saying I have "functional understanding" of something convey that I understand its functions?
3
Does this expression: "it can make us think that we are actually..." clearly showing a negative implication?
2
Does a pedestrian walk 'in' the road, or 'on' the road (both are correct, but which is right?)
4
Am I parsing this incorrectly, or is it really possible to read in ambiguity without more context?
6
Can quoted (i.e. citation) text retain its original sentiment?
1
Does calling to a strange woman "Hey, lady!" sound angry?
1
Constituent structure of 'He arranged for me to go there'