Is there a connection between wans't/wanst and wasn't?

Wasn't is the contracted form of was not. But wanst/wans't was an archaic adverb meaning once:

"Be the bye, I wanst knew art ould woman of that name. She was my darling Tibbie, but a notorious drunkard". 1

"Now, shut your eyes, and turn round wanst" whispered the Grey Man. Shawn did as he was desired; but, when he looked about, he was struck all of a hape to find himself standing in his own bawn.... 2

NB: I originally came across the contraction wans't (sic) here, which led me to wanst. So I'm wondering if there is any connection between wanst or wasn't or even wans't.

For example, sha'n't was the dated spelling of shan't, but shalln't is the archaic form of shan't. Are there cases where the apostrophe was missed out but was intended to mean "shall not"? (shant and shallnt)

Instances where wans't is used in place of wasn't (though this is rare):

Wans't (or rather wanst) as eye dialect from the Domestic Engineering and the Journal of Mechanical Contracting (Volume 84, 1918)

Wanst is the 19th– early 20th c. phonetic rendering, i.e., “eye dialect,” of the Irish pronunciation of the dialect form ‘once + non-etymological t’ as in such words as amidst, against, whilst, and betwixt. In other dialects, it might be rendered as oncet, such as Pennsylvania Dutch or Appalachian speech. The phonetic spelling reflects a more fronted vowel perceived as characteristic of an Irish accent. There is a similar construction: twicet.

… but, Sir, is not wanst nought, nothin ; now, masther, sure there can't be less than nothin." Very good, Sir." " If wanst nought be nothin', then twicet nought must be somethin', for its double what wanst nought is ... — William Carleton, Traits and Stories of the Irish Peasantry, vol. 2, 1830, 190.

… “however the thoughts of the throuble of my poor mother made me hasten my way to Kerry, to the coast near Ventry, where my father's frinds wanst lived; but she had died there broken-hearted. — The Dublin Penny Journal, 3 (1834), 198.

Faith, if I led the Tyrone in rethreat wanst I led thim forty times! Love-o’-Women wud stay pottin' an' pottin’ from behind a rock, and wait till the fire was heaviest, an’ thin stand up an’ fire man-height clear. — Rudyard Kipling, Works [Seven Seas Ed.] vol. 9, 1914, 250.

And in this anecdote from a 1918 number of Everybody's Magazine: 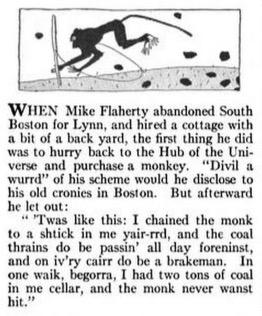 Not the answer you're looking for? Browse other questions tagged etymology archaicisms or ask your own question.