what is the meaning of two streets 'over'?

I watched a movie and heard the following sentence:

Skeeter: I parked way up on State Street and caught a cab here, like you asked.

Aibileen : Got dropped two streets over?

If there is a situation like the below picture illustrates (A,B,C,D,E are the streets) - in the phrase 'two streets over', what is the exact meaning of 'over'?

Is the meaning that Skeeter got out of the taxi on A street or E street? I am wondering what is the context of 'over'? Could between, before or passing, replace the word 'over'?

Some urban areas have streets arranged in a regular grid pattern. If a person is in one street, the next parallel street in one direction can be said to be 'one street over' in that direction. It is not clear in your quoted text whether A or E street is the intended meaning. In the image below, A Street and E Street are both 'two streets over' from C Street. 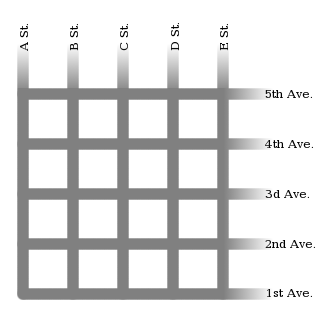 It is worth mentioning that in some cities, grid-pattern roads are named according to some convention, e.g. in a part of New York City, those running north-south (approximately) are called 'avenues' and those running east-west are called 'streets'. One location or road in New York City can be one or more streets or avenues over from another.

I went to Mark's house, which is two streets over.

At the hotel, her room was two over from mine.

Preposition definition 5 in Webster's New World Dictionary is the closest to this sense: "on or to the other side of."

Over is such a useful and fluid word that there are pages and pages of words based on it in the dictionary, from overachieve to overwrought.

"Over" is contrasted against "down".

If you're to reach your destination after proceeding past two cross-streets in the direction you're already going, that is often said to be "two streets down".

But if your destination isn't down the current street, but is located down some other street orthogonal to your current direction, you'd first have to turn down that street, and then proceed to the second cross-street. That's "two streets over".

For example, in a chess game it would be valid English to say "Move the pawn. No, not that pawn, the pawn two over from the bishop". Meaning, the pawn that is two ranks, or two pawns, to the side of the bishop.

At a meeting discussing a selection of possible logos for a business: "I prefer the one three over from it", probably meaning, three icons or logos on from it, to the side, or on the display.

"The secret lever is two bricks over, three bricks up, from the mark on the wall".

"Not that desert - the desert I want is one over from it, next to the fruit salad".

Here it would mean "two corners or roads before or after", probably to the side, or with regard to the direction you arrived from. It often doesn't imply a specific direction (before/after, or left/right), except sometimes when you scan through items that are visible, like a display of pictures, its slightly more likely to imply "further on" than "back among those we already looked at"

3
Is it better to be “hung like a pike” or “hung like a stickleback”?
5
What is the exact meaning of the phrase “Cataract of rippling notes”?
1
meaning of the phrase “bound together by some necessity of nerve that excluded him”
6
What is the exact meaning of “You've got yourself a deal”? Is it only an American slang?
5
What does “you don't need a husband, you need a Greek chorus!” mean?
2
What is this usage of harrumph?
0
Meaning of “foiled rail sabotage bid”
2
What is the meaning of this sentence starting with “Nevertheless”?
6
What is the meaning of: “When I was in New York, I had visited the Statue of Liberty”?
1
What's the difference between “fake it ‘til you make it” and “fake it ‘til you become it”?