How did 'stump up' compound to signify 'pay up money'?

How did 'stump' compound with 'up' in stump something up, to signify:

Etymonline for 'stump' didn't help either.

From 1590s as "reduce to a stump." Sense of "walk stiffly and clumsily" is first recorded c. 1600. Sense of "baffle, bring to a halt by obstacles or impediments" is first recorded 1807, American English, perhaps in reference to plowing newly cleared land, but compare earlier sense "to challenge, dare" (1766).

etymology phrasal-verbs colloquialisms
share | improve this question | |
edited May 31 '18 at 7:04

In the olden days, markets were set up in cleared areas where trees had been cut down and a tree stump could be used as a rudimentary seat or table.

This phrase derives from horse trading or other dealing where money was put onto a wooden post (stump) to display good faith in a cash deal. It is a variant of the expression 'cash on the nail'.

The Reverend William Carr published a glossary of the colloquial language of the Craven district of West Yorkshire in 1828, titled The Dialect of Craven, in which he defined 'stump' as a verb:

From The Phrase Finder

To stump, without the perfective up, first appears with the meaning ‘pay ready money’, i.e. cash in hand, in a Yorkshire dialect dictionary, The Dialect of Craven, by the Rev. William Carr, London, 1828. The origin lies in outdoor trading for horses, cattle, etc. where a buyer would put cash on a stump or post to show sufficient funds for a purchase, as Carr explains, ‘cash on the nail’. Americans would more readily understand cash on the barrel arising from a similar context.

The phrasal verb with up first appears in magazines and newspapers a few years thereafter:

“Why, true, true, Doctor---it might be as well for us all; but who's to stump up for it?” replied one of the officers. I gave him five shillings, and the servant was instantly dispatched for a hackney-coach.— Robert Walsh, John Jay Smith, The Museum of Foreign Literature, Science, and Art, 1831. Also, citing Blackwood’s Magazine, The Sydney Gazette, 11 Aug. 1831.

… but that would not do as he had not got the requisite toggery, and no pals to stump up the blunt to rig him out. — Westmoreland Gazette, 3 March 1832. BNA

James Fellowes, a natty little fellow, in plush jerkin and leather unmentionables, and a bang up upper benjamin, with mother o'pearl buttons as large as saucers, had to stump up the ready for keeping it up the previous evening. — Sydney Herald, 26 March 1832.

... on two occasions Mr. Fyshe Palmer gave me no remuneration ; but on this occasion I expect that Mr. Walter will stump up handsomely. — Morning Post (London), 3 Nov. 1832. BNA

The people are well enough pleased with patriots so long as they keep their hands out of their breeches pockets; but when stump up is the cry, people double-lock their strong boxes ... — The Atlas (London), 8 Dec. 1833. BNA

The “natty little fellow” in Sydney paying a cash fine for public inebriation in a delightful, slang-rich police report suggests an earlier origin for the expression than Craven’s dictionary might indicate.

The first attestation of stump up in the American press hinges on no one knowing what it meant. The context is a bare-knuckle prize fight between two rivals since childhood, both sons of Irish immigrants from the same village in Ireland: John C. Heenan, the “Bernicia Kid,” and John Morrissey. Since bare-knuckle fights were illegal in the US, the bout was held across the border in Canada, 20 Oct. 1858. Heenen’s left hand was injured on a post, so that he lost the bout, which means that a considerable number of bets were also lost. The humorous article shows people of various social classes — a domestic servant, two boys who bet marbles, and two physicians — discussing this very thing:

As your question suggests, direct analogy with the earlier 'pay up' may have contributed to the development of 'stump up'. OED gives attestations as early as 1434 for a transitive sense of 'pay up', that is, "to settle in full … to come up with (money) in payment" (to pay up, trans., 1a, OED). For the intransitive sense,

to pay up
1. .... b. intr. To hand over or come up with money as payment; to settle a debt.
Now frequently with implications of unwillingness or compulsion.

the earliest attestation in OED is 1617.

Prior to William Carr's 1824 gloss of 'stump' in Horæ Momenta Cravenæ as "to pay down, on the nail", which notably does not record the phrasal verb, Pierce Egan weighed in twice. In his 1823 "revised and corrected" edition of Grose's Classical Dictionary of the Vulgar Tongue, Egan gives definitions of 'stump' as "money" and 'stumped' as "poor, destitute of money". More tellingly, in the 1821 Real Life in London, probably also by Egan, the phrasal verb 'stump up' is glossed directly:

Stump up the rubbish — Meaning she (or he) shall pay or find the money.

The entire phrase glossed by Egan, "stump up the rubbish", reinforces a suggestion merely intimated by the chronology of two senses of to stump up attested in OED, senses 17a and 17b of stump, v.1.

The earlier sense, attested 1599 for 17a, is "pull up by the roots"; for example, land that has been "stumped up" or "stumped out", that is, cleared of underbrush, trees, then stumps and their roots (by a process known as 'stumping' — see following), is consequently ready for sale at a higher price than uncleared land. The later 17b, arising at least chronologically from 17a, and attested 1833 for 17b(a) and 1836 for 17b(b), is the slang sense "to pay down, 'fork out' (money)".

The implications of "fork out" echo in the minor key of reluctance or difficulty the "implications of unwillingness and compulsion" frequently associated with 'to pay up' (sense 1b).

Although I could find no evidence that the sense of 'to stump up' with the meaning of "to pay up" transferred from a conjectured practice of putting money on a stump for payment, ample evidence from the period during and prior to adoption of the phrasal verb in the slang sense of "pay up" suggests, rather, that the sense transferred from the laborious practice of 'stumping' ('up' or 'out') land prior to sale.

The process of 'stumping' is described in detail in the 12 Aug 1824 edition of The Morning Chronicle, London:

We pay at present to Government five bushels of wheat per acre upon land clear of brushwood, to make it fit for the plough. The convicts employed in this labour work in larger gangs, under an overseer who has a per centage upon their labour. After they have cut down and burnt off the trees, they burn the stumps out in a very simple and efficacious way, which I never saw nor hear of in Americ. They dig deep round the stump, cover it with dry wood, and over this lay the turf and mould they had dug out, leaving a hole at top, and another at bottom, where they set fire to it, and a strong draught of air thus passing through this species of kiln, the tree root is burnt completely out in a very short period of time; the calcined earth being afterwards strewed over the land as manure.

(Worth an aside is that 'to stump' in the sense of "to cause to be at a loss" probably arose from reference to the "obstruction caused by stumps in ploughing imperfectly cleared land", OED.)

As shown by advertisements for land in the popular press, found throughout the last part of the 1700s and the first part of the 1800s, this 'stumped out' land was so described as ready for sale. For example, 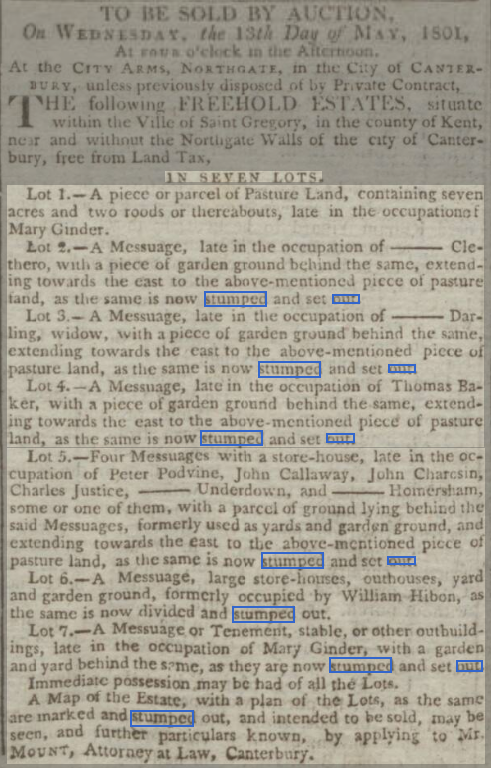 In this connection, note that OED sense 10b of stump, v.1, that is, "to pay up", which is equated with the slang sense 17b(b) of to stump up, is also attested with "out":

1854 C. J. Lever Dodd Family Abroad xliv. 401 There is no salary at first, so that the Governor must ‘stump out handsome’.

From OED quote collection for stump v.1, sense 10b.

Not the answer you're looking for? Browse other questions tagged etymology phrasal-verbs colloquialisms or ask your own question.