How to determine if I should use “St.” or “Saint”? [duplicate]

I'm referring specifically to city names, though I suppose this applies to other things named after saints.

I'm looking for any semblance of rhyme or reason here, but I can't seem to find any documentation on this.

I thought it might be official names, but it appears Saint Augustine is officially "City of Saint Augustine", but the text for the page only includes that 4 times (compared to 139), and none of those are in the actual text.

word-choice abbreviations
Share
Improve this question
asked May 8 '18 at 23:13

St., like Mt. or Ft. or less commonly Ctr., Spgs., Hts., and so on, are just abbreviations. While it is less common to see Sault Sainte Marie as opposed to Sault Ste. Marie, it is not "incorrect" to write it out as such, and for the most part, you can expect official laws and documents to write out the name in full.

How you should represent the name of a place is a matter of style. Adhere to the discipline of your editor, publication, or organization, or in the absence of a house style, adopt a style manual appropriate to your audience and tastes and be consistent in its application.

According to the Chicago Manual of Style, for example,

Prefixes of most geographic names should not be abbreviated in text:

Many editors make an exception for names beginning with Saint (St. Louis, St. Lawrence), and where space must be saved any such prefixes (except San, Santa, etc.) may be abbreviated (Ft., Pt., Mt., S. [South], etc.).

For an alternative view, the AP Stylebook (2013) states

But see the entries for Saint John and Sault Ste. Marie

Saint John The spelling for the city in New Brunswick, to distinguish it from St. John's, Newfoundland

This contrasts with the AP guidance for fort and mount, which are never to be abbreviated.

These do suggest that for a large proportion of American writing, at least, St. is a much more common and acceptable abbreviation than the others in running text.

A single Wikipedia article will not be a reliable guide to usage. The local newspaper is the St. Paul Pioneer Press— 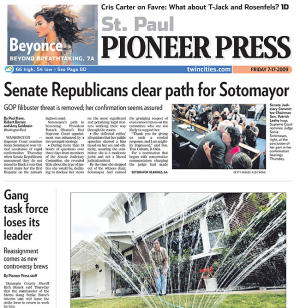 and the abbreviated form is also used by the state tourism board, the airport, the independent baseball team, and so on. For that matter, the Wikipedia discussion on the name points out that both St. Paul and Saint Paul have widespread usage, and "It's almost always useless to debate orthography in this manner."

Not the answer you're looking for? Browse other questions tagged word-choice abbreviations or ask your own question.

16
Is it common for place names to lose their possessive apostrophe?
2
Accepted way to abbreviate cities that have “Saint” in their name

58
How should I abbreviate “versus”?
11
How should I use “eponym”, “eponymous” and “namesake”?
2
Accepted way to abbreviate cities that have “Saint” in their name
1
Should this use of “est.” be “etc.” instead?
2
Should one use “of” when abbreviating “number of…” using “no.”?
0
Saint/St./St/ST in institution names in capital letters
1
Initials of surnames with Saint (St.)