Syntax of fused relative construction with 'what'

I really liked what she wrote.

That said, I'd like to know whether the clause (she wrote) is a modifier or a complement of the head noun (what). 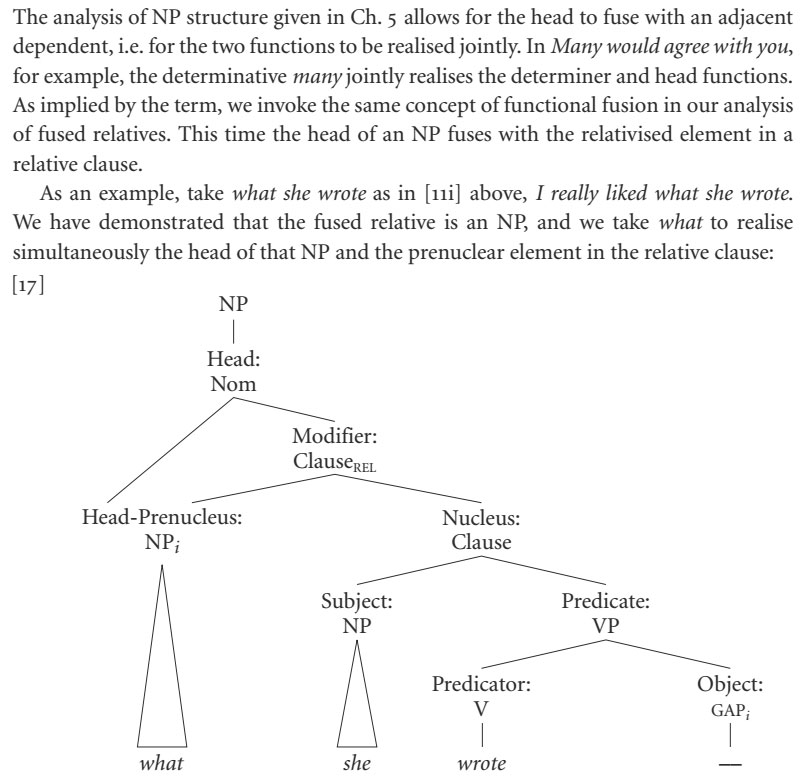 I don't object to this tree diagram itself, because any relative clause is a modifier (not a complement) of an antecedent, and because in a fused relative construction with what, the relative clause itself comprises the 'prenucleus' part of what as well as the following clause (e.g., she wrote).

That said, I'd like to know whether the following clause (she wrote) is a complement or a modifier of the fused relative word (what) in its entirety, which question is not answered in the above tree diagram or anywhere else in CaGEL.

I suspect that, being a fused relative, what is not just any antecedent but is a fusion of an antecedent and a relative word, and therefore that what can be construed as licensing she wrote.

Moreover, removing she wrote would definitely change the meaning of what:

?I really liked what.

All in all, is she wrote a complement or a modifier of what?

After the edit, my question does not go against CaGEL.

> That said, I'd like to know whether the following clause (she wrote) is a complement or a modifier of the fused relative word (what) in its entirety, which question is not answered in the above tree diagram or anywhere else in CaGEL.

This becomes clearer if we consider "that which Clause", which is a conveniently non-fused equivalent (in formal registers) to the relevant sense of "what Clause". In "that which Clause", the head is "that", and the relative word is "which". So your question is equivalent to asking whether the clause is a complement or modifier of the two-word sequence "that which"; and the answer is that it's not, because the two-word sequence "that which" is not even a syntactic constituent. "That which Clause" is constructed as "that {which Clause}"; likewise, "what Clause" is constructed as "Head {Prenucleus Clause}", with the only oddity being that the head and prenucleus are fused into a single word. (This is an example of a bracketing paradox.)

The term modifier is normally reserved for non-head constituents of a Noun Phrase, while complement is normally used for a mandatory non-NP constituent of a clause licensed by the particular verb or verb sense.

So if you prefer, it's a modifier. But I don't think the distinction is of much importance. If you are working on a Linguistics paper, just see what classification works best with your overall analysis and then try to see where the weight of evidence lies.

If you have access to Dixon's Basic Linguistic Theory, sec. 17.5.3 has a good, brief discussion on fused relative clauses and some references for further reading.

Not the answer you're looking for? Browse other questions tagged relative-clauses relative-pronouns or ask your own question.

2
What parts of speech are the words “about and how” in this sentence?
2
Clause acting as an object complement
0
What exactly falls under the label of “complement”?
0
Syntax Question. What is the role of the word “what” in the sentence?