What figure of speech is this statement?

The cynical indifference of the sea to the merits of human suffering and courage revolted me.

An English professor insisted that the above statement is a metaphor. To me though, it looks like personification since the sea is described as showing indifference towards something. It is clearly being personified.

I would like to know if my view is correct.

The statement you have provided is best said to employ personification or anthropomorphism. These two very closely related devices attribute human qualities to non-human entities. In your example, we are attributing the human characteristic of cynicism to the sea.

A metaphor is a device to compare or equate two things. It is often described as a simile without like or as.

In '15, Pope Francis (using a proverb - no man is an island) said: “Dear brothers and sisters, how greatly I desire that all those places where the Church is present, especially our parishes and our communities, may become islands of mercy in the midst of the sea of indifference!” article 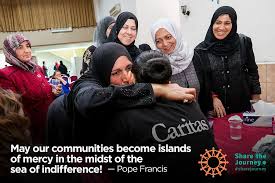 The cynical indifference of the sea to the merits of human suffering and courage revolted me.

is an attempt to use the proverb and put it into a metaphor. It works ... only if in context the discussion implied that sea = 'the masses of' or 'humanity'. 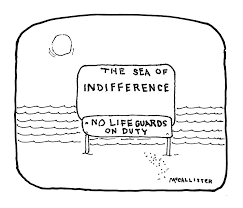 The literary term is:
pathetic fallacy

The phrase pathetic fallacy is a literary term for the attributing of human emotion and conduct to all aspects within nature. It is a kind of personification that is found in poetic writing when, for example, clouds seem sullen, when leaves dance, or when rocks seem indifferent. The British cultural critic John Ruskin coined the term in his book, Modern Painters (1843–60).
Pathetic fallacy (Wikipedia)

Pathetic fallacy, poetic practice of attributing human emotion or responses to nature, inanimate objects, or animals. The practice is a form of personification that is as old as poetry, in which it has always been common to find smiling or dancing flowers, angry or cruel winds, brooding mountains, moping owls, or happy larks.
Encyclopaedia Britannica

n. The attribution of human emotions or characteristics to inanimate objects or to nature; for example, angry clouds; a cruel wind.
American Heritage Dictionary

It's also metaphor and personification, as have been mentioned already.

Not the answer you're looking for? Browse other questions tagged figures-of-speech or ask your own question.