The above phrase is something I've known for as long as I can remember, though I don't know from where. What is its origin and usage?

Example: "While Android products aren't quite what I need, iOS devices fit my needs to a T."

According to the Oxford English Dictionary, the exact origins of the phrase to a T are unknown:

The original sense of T here has not been ascertained. Suggestions that it was the tee at Curling, or at Golf, or a T square, appear on investigation to be untenable; it has also been suggested that it referred to the proper completion of a t by crossing it (see 1b); or that it was the initial of a word; in reference to this it is notable that to a tittle (i.e. to a prick, dot, jot) was in use nearly a century before ‘to a T’, and in exactly the same constructions: see tittle n.

So, it is possible that the use is not referring to the use of a tee when building something. The Phrase Finder agrees that there is no accepted derivation, but offers the following:

Given Wright's earliest 'to a T' usage and the lack of evidence to support the 'tee' version, it is safe to assume the proper spelling is 'to a T'. So, what T was meant? Again, there are alternatives; 'T-shirt', or 'T-square', or some abbreviation of a word starting with T.

When there isn't a definitive origin and there are several proposed derivations, the wisest course is to list the possibilities and leave it at that. In this case, although there is no smoking gun, the 'to a tittle' derivation would probably stand up in court as 'beyond reasonable doubt'.

So the OED and Phrase Finder agree that the most likely etymology is that the phrase to a T comes from to a tittle. There is also the phrase:

to a tittle, with minute exactness, to the smallest particular, to a T.

A tee is a right angle instrument used to draw and measure square corners in building and carpentry. 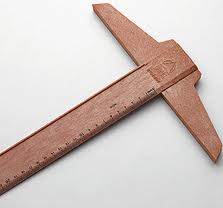 When you carve a square stone to build your medieval cathedral (or cut drywall to build your garage) you test it is square by holding up the tee to it.

OED says that you can spell it as to a T or to a tee. As was already mentioned, no one knows for sure where it came from.

The earlier phrase "to a tittle", of which "to a T" is apparently a shortened form, would seem to be derived from King James bible (originally translated in 1611, and by the end of that century the most widely used English language bible).

18 For verily I say unto you, Till heaven and earth pass, one jot or one tittle shall in no wise pass from the law, till all be fulfilled.

17 And it is easier for heaven and earth to pass, than one tittle of the law to fail.

Read these passages in context

Christ's meaning in these passages is obvious; the Hebrew scriptures must be fulfilled completely - in every minute detail - and he was there to do so. You could say he fit their law "to a T".

I have just watched the WW1 Antiques Road show special http://www.bbc.co.uk/programmes/b04nw22y which features a woman who brought several letters written by her grandmother's first husband to her grandmother during the War. She had given him a pen and in the letter he says, "As you can see the pen works very well and it suits me to a tittle." So, unless that phrase originates earlier than the beginning of the 20th century, surely this is the origin of "suits me to a t(ittle)".

A DayA Day
911 bronze badge
1
Add a comment  |
Highly active question. Earn 10 reputation (not counting the association bonus) in order to answer this question. The reputation requirement helps protect this question from spam and non-answer activity.