Coming from German, I have always said “bike saddle”. But later a friend from Philadelphia told me that the common word is “bike seat”, and I would not necessarily understood if I say saddle. Some online research indicates that in fact both are in use.

So I wonder: is there a difference in connotation, in regional use or in who uses it (enthusiastic cyclists vs. non-cyclists)?

Among people who ride bikes in the UK, even if they wouldn't call themselves cyclists, saddle appears to predominate. The word would be universally understood, with the only possible confusion being if you said you were a bit saddle sore after to much riding at the weekend and your hearer didn't know whether you meant a bike or a horse.

A lot of related components include the word seat (seatpost or very rarely saddlepost, always seatstay). Many accessories always (saddlebag) or usually (saddle cover) refer to saddle rather than seat).

Bike seat is also used to mean a seat for carrying a child on a bike, but saddle isn't. 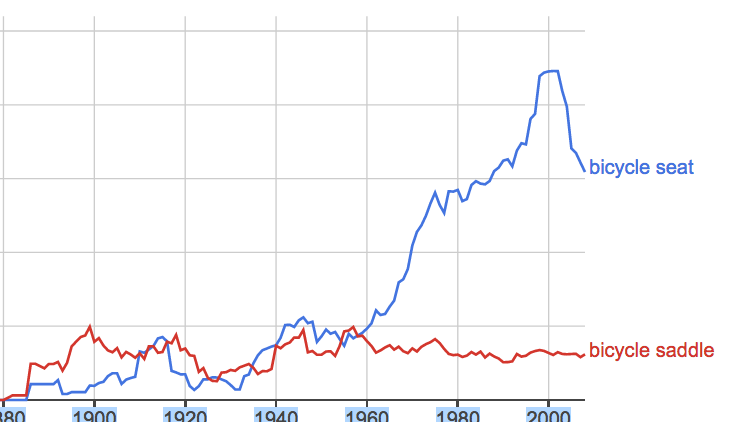 They are very very close to being the same in general ... but some purists and pro may disagree. For more read:

Speaking only of my experience in the United States, I would agree that most people would not understand the term "bike saddle" because most are not "cyclists". In fact, I don't think I have ever heard the term used -- but then again I'm not a cyclist.

FYI - This site devoted to vintage Schwinn bikes addresses the history of "saddles" vs. "seats". https://bikehistory.org/parts/seats.html

Not the answer you're looking for? Browse other questions tagged word-usage differences or ask your own question.

2
Is “key” as an adjective, meaning “crucial”, standard in American English?
6
Australian hypocorism and the origin of “selfie”
2
Difference of “injury” from “wound.”
1
Is using bike word to address a motorcycle correct?