Is bachelorette replacing spinster and other synonyms?

Bachelorette meaning "unmarried woman" is an English expression with a French-sounding flavor which dates back to the late 19th century, but its usage has considerably increased from the early '90s.

In recent decades the expression seems to be more commonly used than other less appealing synonyms such as "spinster" or "unmarried woman".

In recent online articles, for instance, you may read:

Is bachelorette becoming the "preferred" neutral expression to refer to an "unmarried woman"? Is it commonly used both in BrE and AmE? What may have caused its increase in usage from the '90s, one century later than it was first coined?

According to COCA, bachelorette is more popular than spinster (and unmarried woman), something that only really changed in the last 10-20 years. Compare the "per mil" rows in the following charts.

One pretty significant thing I see in these charts is the fact that most of the hits for spinster are from fiction (and there are very few hits for the other sections).

It's also important to note that spinster is not neutral:

The development of the word spinster is a good example of the way in which a word acquires strong connotations to the extent that it can no longer be used in a neutral sense. From the 17th century the word was appended to names as the official legal description of an unmarried woman: Elizabeth Harris of London, Spinster. This type of use survives today in some legal and religious contexts. In modern everyday English, however, spinster cannot be used to mean simply ‘unmarried woman’; it is now always a derogatory term, referring or alluding to a stereotype of an older woman who is unmarried, childless, prissy, and repressed
Oxford Dictionaries

Is bachelorette becoming the "preferred" neutral expression to refer to an "unmarried woman"?

These ngrams, first AmE and second BrE do not suggest it is so: 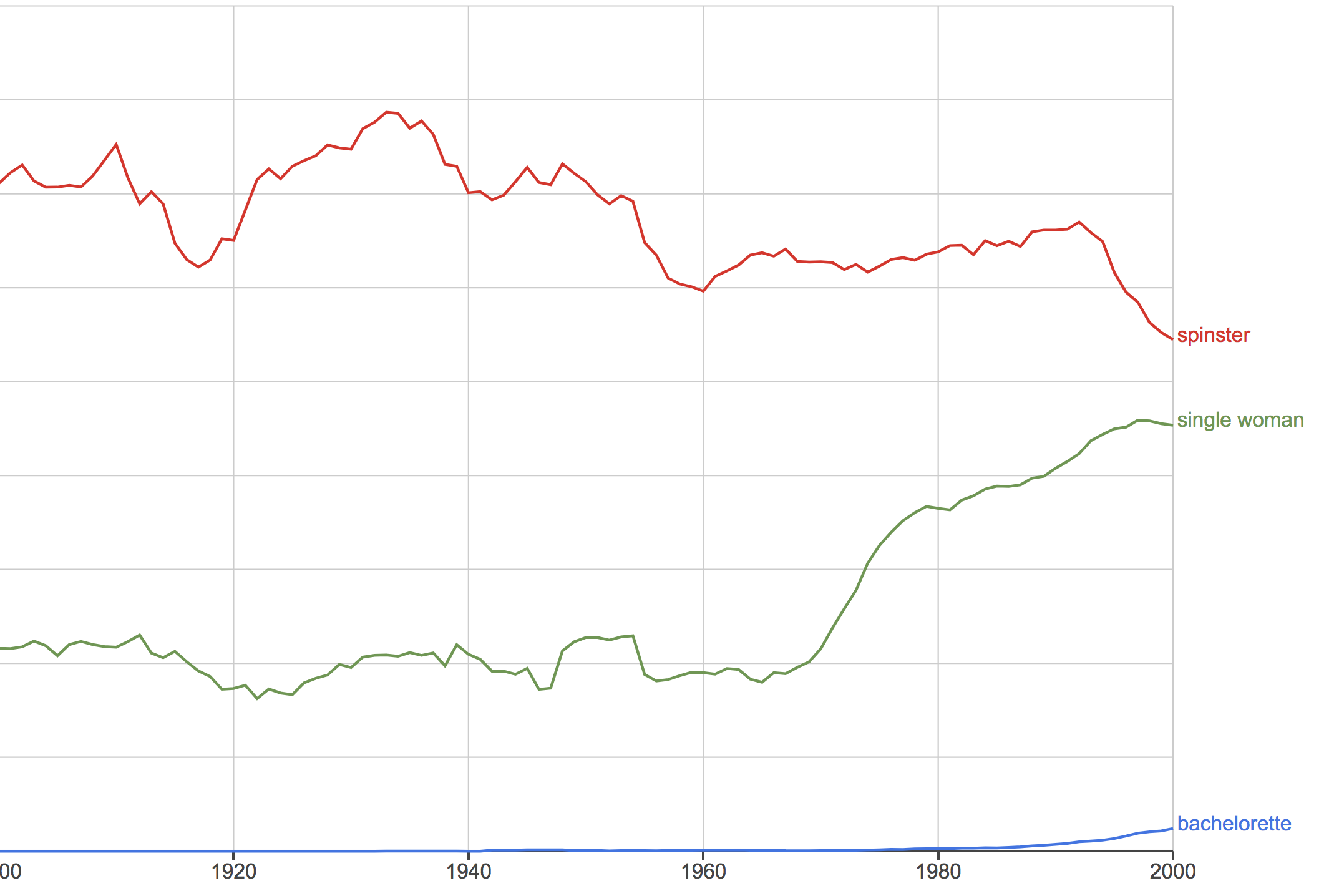 Is it commonly used both in BrE and AmE? & what may have caused its increased in usage from the '90s, one century later than it was first coined?

In the U.S. the eponymously named show has likely had influence. Spinster may have declined somewhat and likely suffers from the pc police. Single woman seems to be more acceptable. In the U.S. rarely is bachelorette used unless discussing the TV show or in just casual/informal talk.

In this wikipedia article the possible origins of bachelorette are discussed (1965 and 2003). wikipedia

and this article on the BrE use of same: Anglophenia

addendum: I coaxed ngram to 'cough up' data to 2008 v 2000. (AmE on the left, BrE on the right) There is noted a definite uptick in bachelorette but single woman still predominates. But 10 years have passed. There is a sophisticated too to analyze spoken word, (BYU Corpora) but it is costly. 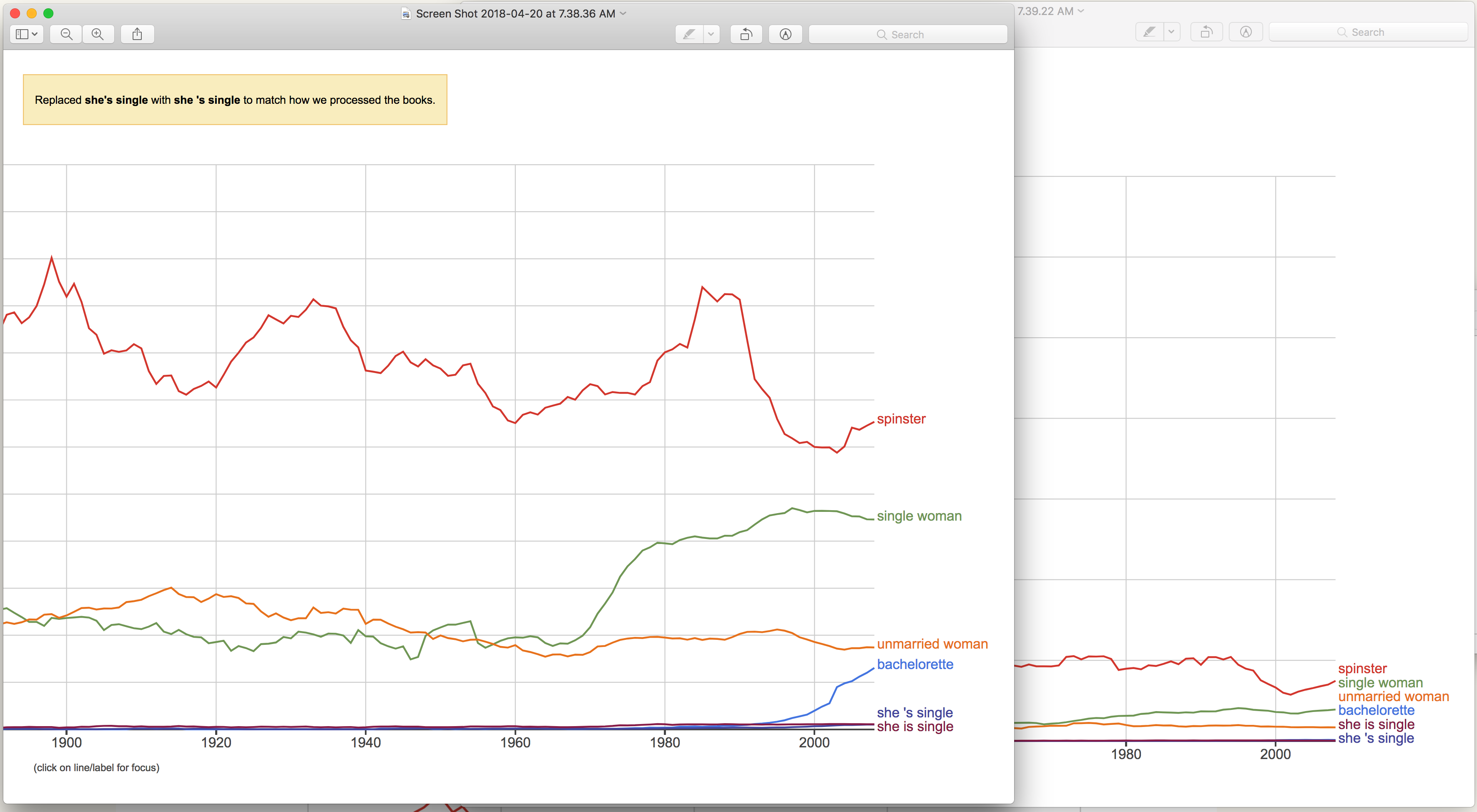 It would appear so but it really depends on the people you hang around with.some younger people say bachelorette but older ,might say spinster like when dating some say courting it just really depends

Not the answer you're looking for? Browse other questions tagged word-usage american-english or ask your own question.

8
What was the original usage of the term “haptic”?
2
Why do we say “shame on you”?
2
Usage and origin of “prioritize”
12
Usage of “hysterical” meaning “very funny.”
5
Was “remake” as a noun coined by the movie industry?
12
Origin of “the apple doesn’t fall far from the tree”
6
When did “escort” become an euphemism for prostitute?
0
Origin of the verbal form of morph
4
Origin of “name and shame”
16
What’s the British English for “shotgun wedding”?