Is there any evidence for "altercate" ever having been pronounced with stress on the second syllable?

In modern English, polysyllabic verbs ending in -ate are regularly stressed on the third-to-last syllable. (There are some (possible) exceptions, such as incarnate, impregnate, and elongate.)

But it seems that certain speakers in the past followed a different rule, whereby the stress fell on the second-to-last syllable when it was "closed" (ended in a consonant) in Latin. A well-known example of an -ate verb that used to have this stress pattern is contemplate; the Oxford English Dictionary entry for this word summarizes the situation as follows:

In a few rare cases (Shakespeare, Hudibras) stressed ˈcontemplate in 16–17th cent.; also by Kenrick 1773, Webster 1828, among writers on pronunciation. Byron, Shelley, and Tennyson have both modes, but the orthoepists generally have conˈtemplate down to third quarter of 19th cent.; since that time ˈcontemplate has more and more prevailed, and conˈtemplate begins to have a flavour of age. This is the common tendency with all verbs in -ate. Of these, the antepenult stress is historical in all words in which the penult represents a short Latin syllable, as acˈcelerate, ˈanimate, ˈfascinate, ˈmachinate, ˈmilitate, or one prosodically short or long, as in ˈcelebrate, ˈconsecrate, ˈemigrate; regularly also when the penult has a vowel long in Latin, as ˈalienate, ˈaspirate, conˈcatenate, ˈdenudate, eˈlaborate, ˈindurate, ˈpersonate, ˈruinate (Latin aliēno, aspīro, etc.). But where the penult has two or three consonants giving positional length, the stress has historically been on the penult, and its shift to the antepenult is recent or still in progress, as in acervate, adumbrate, alternate, compensate, concentrate, condensate, confiscate, conquassate, constellate, demonstrate, decussate, desiccate, enervate, exacerbate, exculpate, illustrate, inculcate, objurgate, etc., all familiar with penult stress to middle-aged men. The influence of the noun of action in -ation is a factor in the change; thus the analogy of ˌconseˈcration, ˈconsecrate, etc., suggests ˌdemonˈstration, ˈdemonstrate. But there being no remonstration in use, reˈmonstrate, supported by reˈmonstrance, keeps the earlier stress.

Based on this information, I thought that the rare verb altercate must have used to have a pronunciation with stress on the second-to-last syllable. But I've had some trouble finding material that supports my guess.

One of the earlier OED citations, from F. Quarles Divine Fancies i. xl (the OED gives the date as 1632), uses the word in verse in a context where it seems it would have to scan as stressed-unstressed-stressed:

Whenas my Body and my Soule shall plight
Inviolable faith, and never fight
Nor wrangle more, nor altercate, again,
About that strife-begetting question, Sin !

(The Complete Works in Prose and Verse of Francis Quarles, by Alexander B. Grosart, 1880)

Annoyingly, the verb doesn't seem to have an entry in John Walker's Critical Pronunciation Dictionary of 1791, although Walker evidently was familar with it since he uses it in the definitions of "to chop" and "to stickle" (though the "stickle" definition doesn't seem to have originated with Walker, as it can also be found in Sheridan's dictionary and Johnson's dictionary).

Does anyone know of any evidence for stress ever falling on the second syllable of altercate in the past? I'm thinking the most likely place such information would appear is in old dictionaries or poems. The OED's earliest citation for the verb is from 1530.

Samuel Johnson’s dictionary of 1755 has no entry for altercate, but tantalizingly does have one for the verb alternate, where he indicates the stress on the second syllable (like alternative), adducing a citation from Milton where the meter suggests that pronunciation. The entries for the adjective and noun are also instructive.

Thomas Dyche’s spelling dictionary of 1737, however, shows Johnson’s pronunciation of alternate, but an accent on the first syllable for altercate: 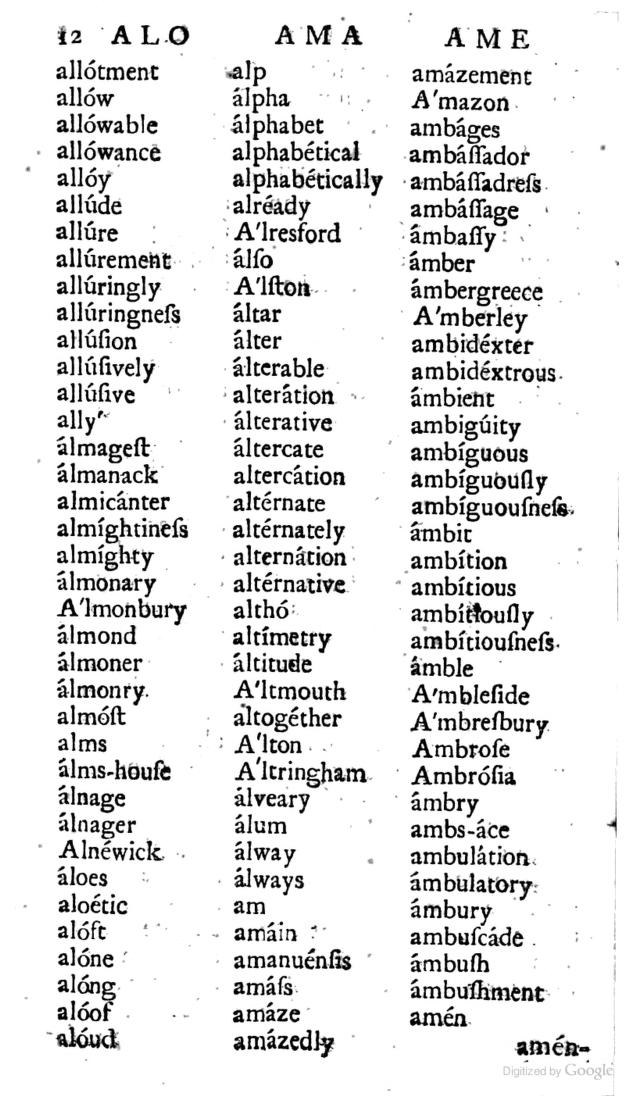 3
What determines the stress of an adjective formed by adding "-ive" to a verb ending in "-ate"?

12
Why do English men's names almost always stress the first syllable?
3
"Accessory" pronounced with a stress on the first syllable
16
Why does "stigmata" [often] have penult stress?
3
Is there a rule for the position of the accent (stressed sound) in words ending with -ative?
9
How is "cyan" pronounced and where is the stress?
5
What are the historical justifications for first-syllable stress in the word “orthoepy”?
12
How has "Boadicea" been pronounced at different points in history?