My native language is Danish, with its gigantic number of vowel sounds, and this undoubtedly affects how I hear English vowels. However, one phenomenon in English has bothered me for many years, especially in Received Pronunciation, and I have so far been unable to locate any descriptions of it.

No matter how many times I listen to the English /u:/ sound, like in “do” /du:/, what I really hear on the phonetic level is not a pure, single-vowel [du:], but something like [dyu:] or even [dyu̯:]. And by this [y], I really mean the vowel sound which in IPA is written [y], that is, the sound of “u” in French and “ü” in German. So what I hear (and, I admit, also say) is a diphthong, starting with a short [y] and ending in a semivowel version of [u]. If I say simply [du:], it sounds in my ears completely different from how I hear most native (RP) speakers say it, and more like something you might hear from people with a strong Italian accent.

Is it just me hearing things, or is this an actual phenomenon?

You aren't just hearing things. For many English speakers, the phoneme /uː/ is realized as a fairly front vowel in most contexts, and since the four English "tense" vowels (the vowels in fleece, goose, face and goat) tend to be realized with a bit of a high offglide at the end, this could reasonably be transcribed as [yu̯]. The frontness of a vowel can be measured acoustically in terms of the value of its "second formant" or "F2": higher values of F2 are associated with fronter vowels.

To summarize, /u/ has a somewhat fronted or centralized realization (mean F2 greater than 1200 Hz) in general for most North American speakers, but there is a band stretching across the north of the United States where more back realizations are still common. The use of a fairly front realization (mean F2 greater than 1550) after coronal consonants is even more widespread, with the backer realizations mostly occurring in certain spots in Minnesota/Wisconsin, New England and New Jersey. 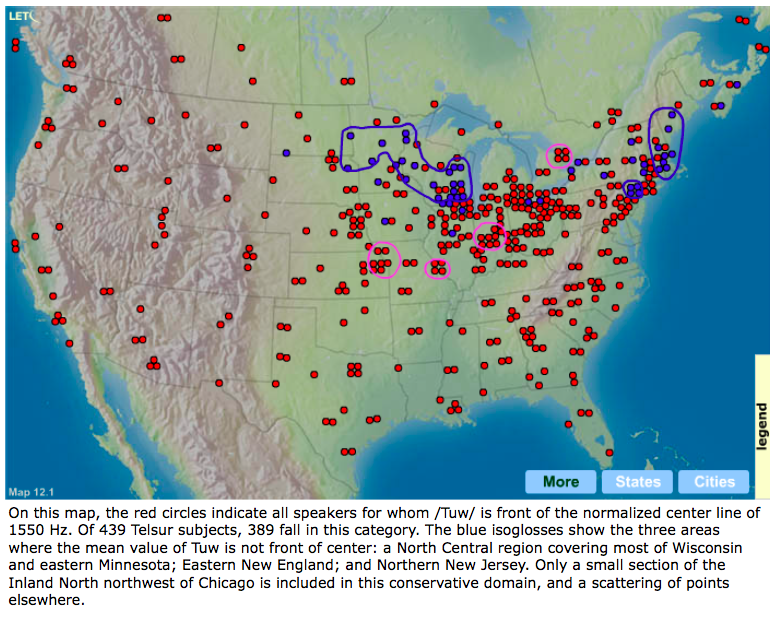 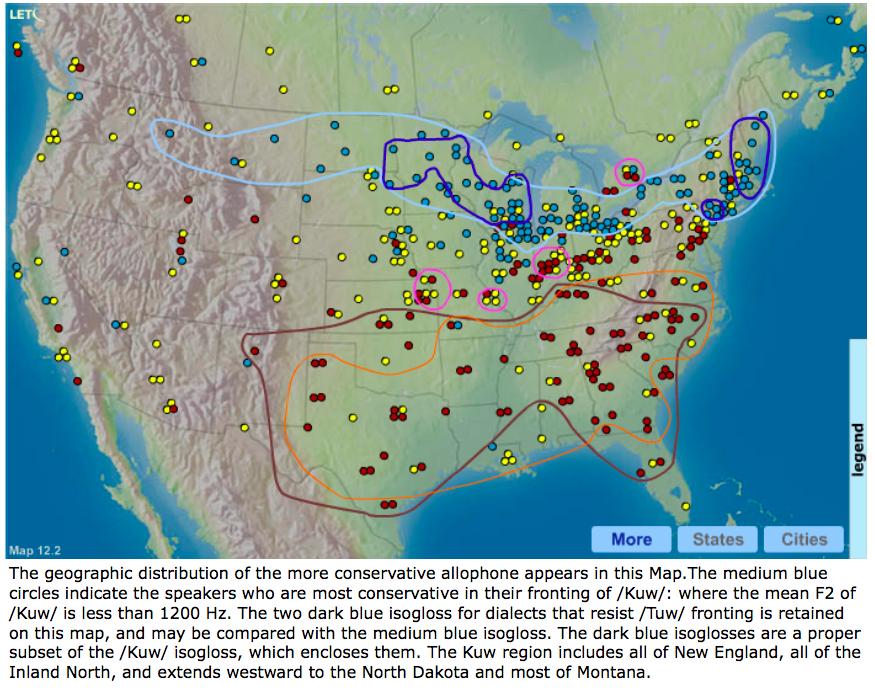 The linguist Geoff Lindsey has made some blog posts mentioning the existence of central or front realizations of /uː/ in "Standard Southern British", and the tendency to use a more back realization before "dark l".

Wikipedia suggests that front-of-center realizations of /u/ (when it's not before /l/) may be particularly common in "California English". It cites a web page "Northern California Vowels" from Penny Eckert's website that says

Below is a vowel plot showing the shifting of /uw/ (new, food). This vowel is represented as black circles with arrows. When /uw/ is followed by /l/ as in school, it does not shift, but remains where we expect it to be. This plot shows that other occurrences of /uw/, however, overlap with the vowel in mister (empty circles) and approach the vowel in me (empty circles with arrows).

The only way you could be hearing an actual /y/ vowel would be time travel. Early Middle English preserved the rounded vowel in words of Anglo-Norman origin such as duke. These were also the days when new /iu/, few /eu/, and dew /ɛu/ each had distinct diphthongs and thus did not rhyme. By Late Middle English, /y/, /eu/, and /iu/ had all merged to /ɪu/, joined by /ɛu/ in Early Modern.

The story stops here for some Welsh, northern English, and older Southern American accents, while the rest shifted the falling diphthong /ɪu/ to a rising one: /juː/. This change is documented for London by the end of the 17th century. How by yod-coalescence or yod-dropping depending on consonantal environment and accent /juː/ becomes /uː/ is another story entirely.

Now a /y/, long or short, is really just an /ɪ/ or /i/ with lip rounding, so I can imagine the slim possibility of someone speaking in an accent that preserved the /ɪu/ rounding the lips a split second before moving to the /u/ producing a transient /y/, but RP did not retain that particular diphthong.

Without hearing an audio example in which you are discovering this “hidden” /y/, I can’t be sure what you’re hearing, but chances it’s really a /y/ seem remote.

Not the answer you're looking for? Browse other questions tagged phonology vowels diphthongs or ask your own question.

6
What exactly is the "schwa" sound?
5
Is /æ/ sound always same?
4
Not fully pronounced oʊ (ō) sound in some words
1
Is schwa always from vowel reductions?
2
vowel reduction phoneme overlapped
3
Vowel in "-ang" and "-ank" Words: Pronunciation and Dictionary Transcription
0
Ambiguous spelling of extended vowel sound
2
American English: Gliding of the long "ee" sound: [i] to [ɪi]