“My pigs are killing me!”

How has the word "pigs" come to be used as slang for feet?

As in the phrase:

My pigs are killing me!

It seems to me that "pigs" and "feet" have very little in common.

I'm not sure how common this usage is. I've certainly heard it on several occasions.

Actually, I believe it refers to the person's toes, rather than the feet themselves.

It is a reference to the old nursery rhyme This Little Piggy, which is typically done while playing with each of the child's toes in turn. 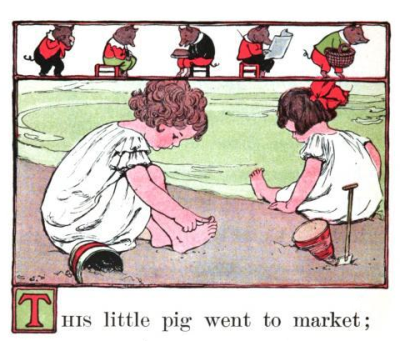 I've seen a Looney Tune cartoon or two where it is used in this sense, and the given Wikipedia link mentions several. Most often a cartoon character almost falls off something, is hanging on by his toes, and the protagonist evilly plays "this little piggy" while pulling up the toes one-by-one.

I think it has to do with the use of trotters as slang for feet, as can bee seen in this entry at Dictionary.com

trotters noun - 3. the foot of an animal, especially of a sheep or pig, used as food.

And further down the page in the slang section

noun the feet. : Sit down and give your trotters a rest.

11
What is the etymology of “Tough titty”
9
“Machine” as a 1920s American term for “car”
3
Origin of using “clocked” to mean “noticed”
3
The Origin of “Killing It”
4
Where did the 1920s slang word “grungy” (meaning “envious”) originate, if the modern word “grungy” (meaning “dingy”) doesn't appear until 1965?
4
Where did the slang word “basic” come from?
3
Source of “miscarriage of justice”
1
motherload – a common mistake or slang word?