How to address a former president in a letter?

I would like to ask how to address a former president on a letter. Should I write "Dear Mr. Obama" or "Dear Former President Obama"? I found this information:

But I would like to double check it. Thank you.

writing-style formality forms-of-address
Share
Improve this question
edited May 4, 2018 at 17:01 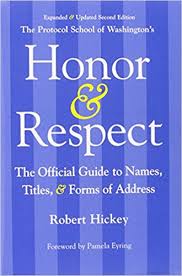 Is a Former President Addressed as President(Name)?

Dear Ms. McDonald: This issue is complicated since we hear former Presidents referred to as President Clinton and President Bush on the media all the time; Here's what is the correct formula as it appears in my book (assuming they didn't have an honorific other than Mr./Ms. to go back to ... as General Dwight D. Eisenhower did, who went back to "General Eisenhower" or Barack Obama did, who went back to "Senator Obama".): Former President of the United States Envelope, official: The Honorable (Full name) (Address) Letter salutation: Dear Mr./Ms. (surname): Conversation: Mr./Ms. (surname)

I found this helpful. I hope it is of use to you.

Not the answer you're looking for? Browse other questions tagged writing-style formality forms-of-address or ask your own question.

11
If America has a woman President, will her husband be known as 'The First Gentleman'?
4
Addressing a former office-holder by that office's title

2
Are there linguistic markers that indicate to subordinates a desire to be addressed less formally
3
How to express my first name in initial(s) when its composed of two separate parts
3
How would one address a female priest in the Anglican Community?
1
How to refer to a deceased widow?
1
How would you capitalize sister-in-law as a form of address?