What is the term for a marginal letter in a printed book?

Sometimes there are marginal letters in old books that serve as sort of an indexing mechanism. An example is shown in the detail below: 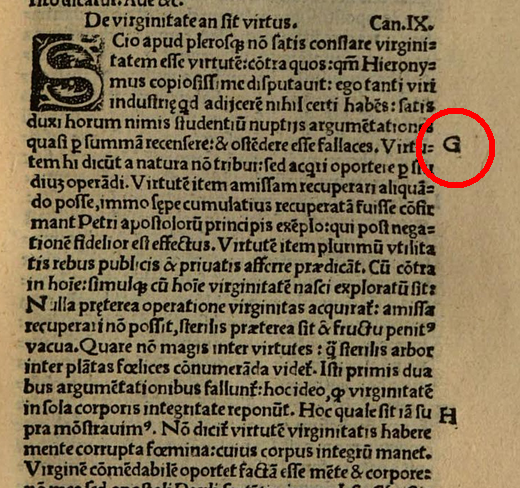 What are these elements of the book called?

Hans H. Wellisch, librarian, scholar, and one-time president of the American Society of Indexers, uses the term locator or index locator to refer to marginal markings like these.

In "The oldest printed indexes" (1986), published in Vol. 15 No. 2 of The Indexer, Wellisch writes about indexes in incunabula (early manuscripts) (emphasis mine):

Indexes to manuscripts could indeed not refer to leaves or pages, but they employed other locator techniques: since the text of many theological, philosophical, medical or legal treatises had become fairly standardized by division into chapters and (often numbered) paragraphs, reference was made to those, thus rendering the index locators independent of pagination.

As an aid to easy reference, paragraphs were often marked in the margins by letters of the alphabet which served as more precise locators to which the index referred.
...
The indexer divided Augustine's text into 80 paragraphs which were indented, marked by red paragraph signs and indicated by a sequence of single and double letters, set out in the inner margins opposite the first line of each paragraph (see figure 1). 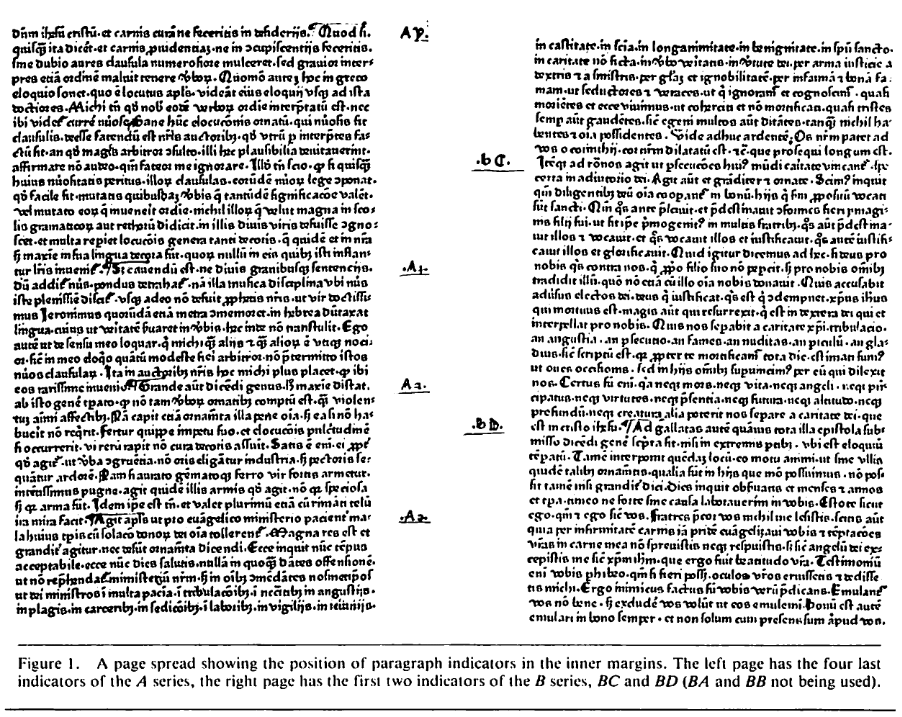 The 15th century publisher of that work explained the indexing scheme in his preface:

Everybody should also know that the alphabetic letters, both singles and doubles, set out in the inner margins, serve the said index of the book which refers to the very same letters for individual points [i.e. topics], so that everybody who wants to find quickly something that is contained in this little book can find it, and not least also by means of various and many cross-references {remissiones) it will be revealed what is sometimes contained in the diverse passages of this little book at those points, which will prove to be most fruitful for those who wish to study the book. End of prologue.

Here we see an example of the index itself with the locator references written in after the subjects:

In "Incunabula indexes" (1994), published in Vol. 19, No. 1 of The Indexer, Wellisch includes an entire section called "Locators" in which he explains the benefits of such a system over pagination:

Foliation and even pagination, with both Roman and Arabic numerals, was known and used in some manuscripts of the late Middle Ages (Rouse 1976), but it was not widely used by the early printers who relied rather on signatures to indicate the correct sequence of gatherings for the binders. Indexers continued therefore to use chapters, paragraphs and sections as well as marginal letters and a bewildering array of other means to show at least approximately where a reader should look for a name or subject. Only towards the end of the 15th century did foliation and pagination become more commonly used in books and in their indexes. The earlier methods had, however, the advantage that an index could be compiled before the text was printed, and it also made indexes 'portable', that is, they could easily be reprinted by the same as well as by other printers, independent of the way in which the text had been set.

From these examples, it seems, at least within the community of book indexers, that these letters are called locators or index locators, and that a specific subtype of locator is the paragraph indicator. Locators are referenced by the index entries, thus enabling readers to locate roughly the section or paragraph of the manuscript that contains the subject of interest.

I'm not sure if this applies to single letters, but usually any notes to the side of the main body of text are called:

pl.n. Notes in the margin or margins of a book.
American Heritage Dictionary

Whether marginalia can be a single letter acting as a reference or index, I don't know.

Not the answer you're looking for? Browse other questions tagged terminology books or ask your own question.

3
When there are several appendices, what is that part of a book called?
3
What is the term used for people who drive slowly?
14
Is there a term for polishing something too early?
1
Is "delayed appositive" the correct term for this?
12
Word for a ‘vignette’ on a specific topic within a book
1
What are the names (/terms) for an anticipated-but-missing rhyme?
2
Is there a term for the reduplication of letters?
4
Is there a distinct term for acronyms with multi-letter parts?