What is the origin of the phrase "laundry list"?

I'm confused by this phrase because I have never made a list of any length while doing laundry (my family and I have always done laundry on our own in our houses). Is there some cultural context I'm missing? How did this phrase come about? 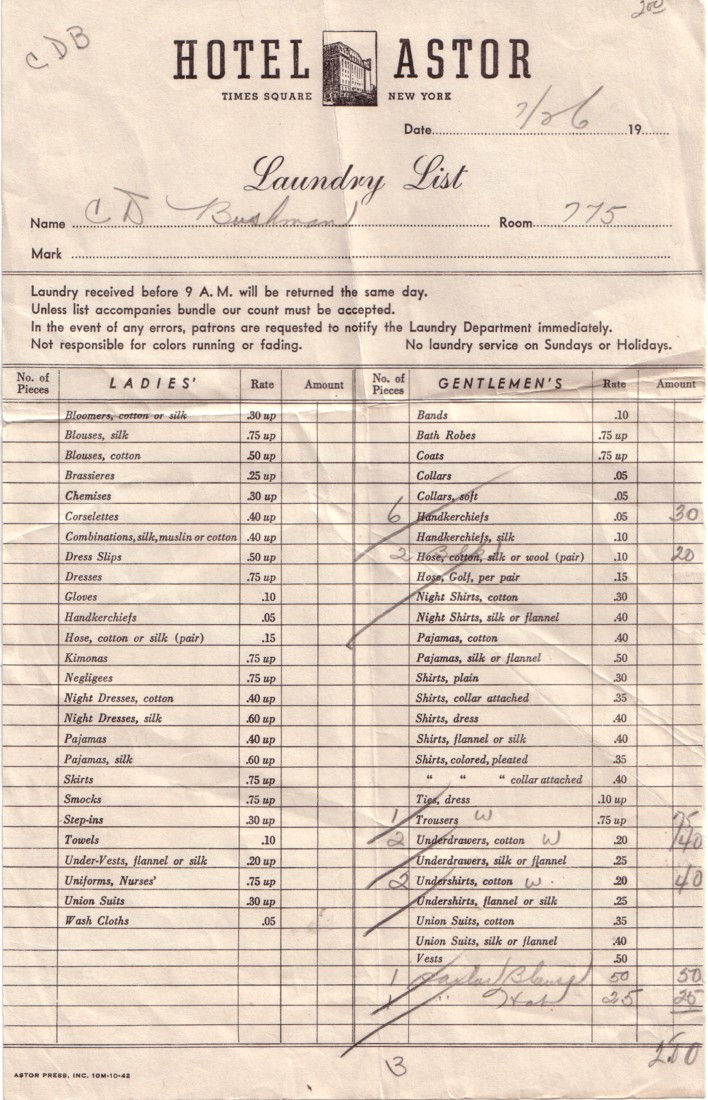 …it seems that once folks did indeed have to make inventories of their clothes before sending them to be laundered. The illustration above is of a laundry list filled in by guests of New York’s Hotel Astor, back in the day when it cost a mere 5 cents to launder a handkerchief. According to Wiki.answers, this practice might date back to as early as the Civil War, when soldiers would make a list of their items to be laundered. (Although were there really people laundering the clothes of the military back in those days?) Wiki.answers believes the laundry list proper originated in the late nineteenth to early twentieth century when many sent their laundry out to be cleaned.

The late Denver Post columnist Ed Quillen wrote a colorful little piece about his experience of working for the family laundry business when he was a young teenager. Enlightening and evocative as the article is — with images of counterpanes and half-pairs, women’s blouses and priests’ collars, it’s not difficult to imagine how such lists of clothing items could soon become deadly in their length and detail, especially to those reading or creating them for a living. Laundry lists of yore certainly wouldn’t have made it onto today’s Buzzfeed – the king of entertaining internet lists. No, it doesn’t take a great leap of the imagination to see how our modern proverbial laundry list (ie. a tediously or unnecessarily lengthy list of items) was born from its literal forebear, which guaranteed efficiency and the return of freshly-laundered undergarments but not necessarily a basketful of laughs.

Back then, before permanent press and abundant home washers, many people sent their clothes to a commercial laundry, where it was my job to mark it and sort it.

So I had to learn many distinctions as I marked and sorted the clothes, sheets, towels, etc. Also, I had to record them on the “laundry list” — a printed form that you filled out with the laundry mark and the quantity next to the appropriate category on the laundry list.
[cont'd]

While the printed list seems to have arisen in the late Victorian era, the general concept is much older. Such a list plays an important role in Jane Austen's Northanger Abbey (called a "washing-bill"):

The manuscript so wonderfully found, so wonderfully accomplishing the morning's prediction, how was it to be accounted for? What could it contain? To whom could it relate? By what means could it have been so long concealed? And how singularly strange that it should fall to her lot to discover it! Till she had made herself mistress of its contents, however, she could have neither repose nor comfort; and with the sun's first rays she was determined to peruse it. . . .

Her greedy eye glanced rapidly over a page. She started at its import. Could it be possible, or did not her senses play her false? An inventory of linen, in coarse and modern characters, seemed all that was before her! If the evidence of sight might be trusted, she held a washing-bill in her hand. She seized another sheet, and saw the same articles with little variation; a third, a fourth, and a fifth presented nothing new. Shirts, stockings, cravats, and waistcoats faced her in each.

Northanger Abbey was the last published of Austen's extant novels (1817), but was actually written the earliest, with the manuscript apparently completed in 1803 (see Wikipedia). Such lists must have been commonplace, at least among certain classes, by the late eighteenth century when Austen was writing (and when the bill would have been left behind, in story time).

Figurative usage dates to at least 1940:

The first step is to make a laundry list of symptoms in Bill's case.
—Charles Allen Prosser, James Shoals Lincoln, The Employer, the Employee, and the Job, 1940, snippet view. (The metaphor is apparently used extensively in this section.)

It is an extension of the original meaning (a list of items that were sent to the laundry to be cleaned) which appears to have developed from the ‘50s:

A long bill of items to be obtained, discussed, done, or not done : 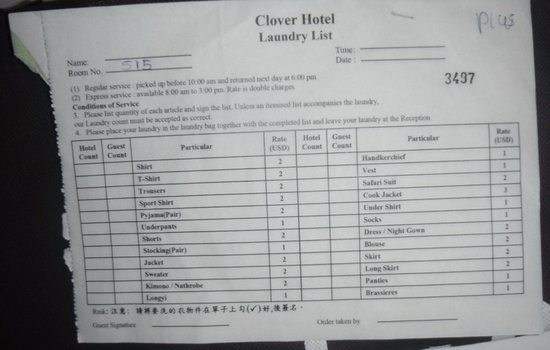 Originally, a list of articles of clothing that had been sent to be laundered. quotations

but this from collinsdictionary.com suggests earlier use:

and this ngram suggests even earlier use! 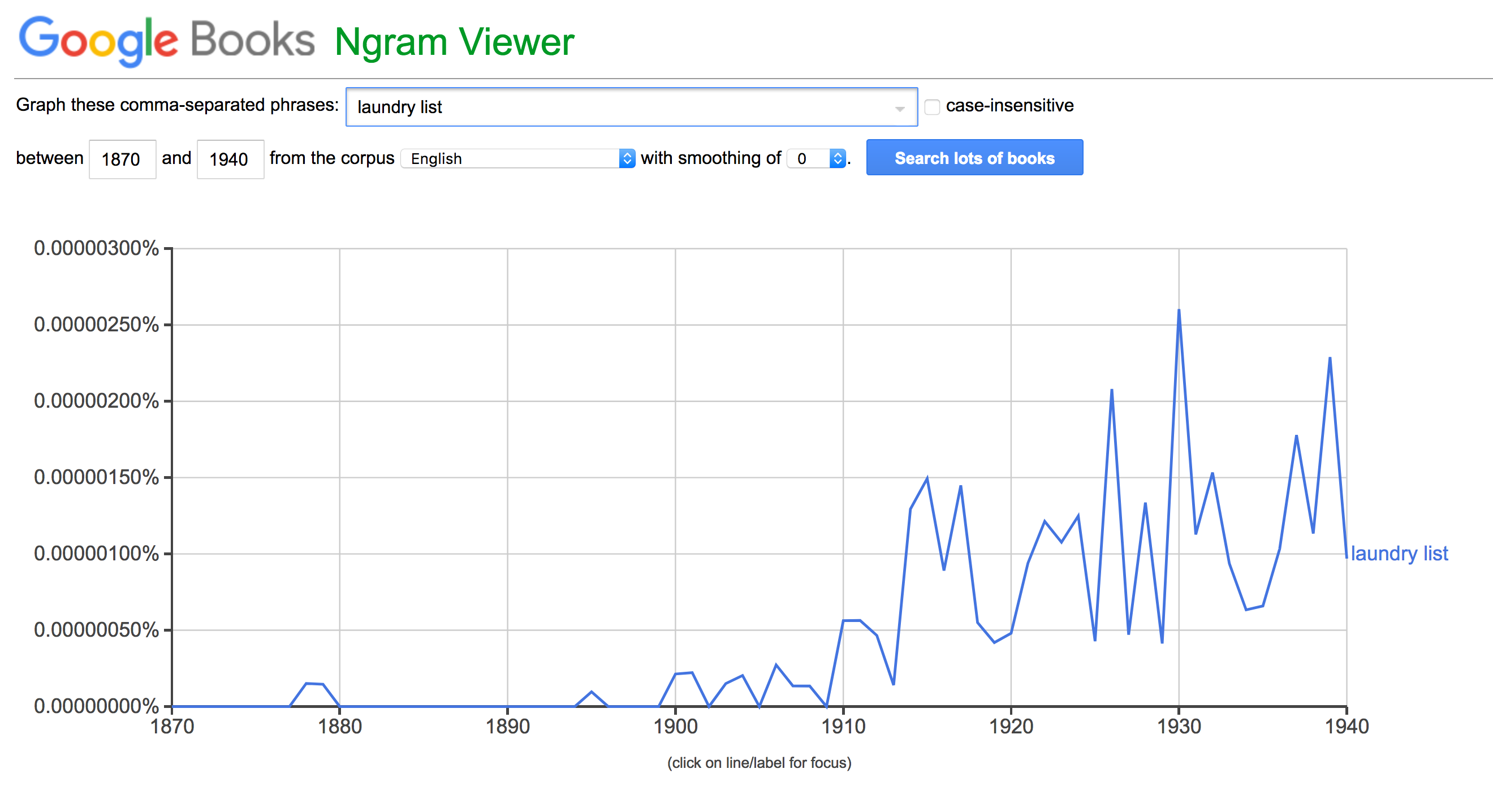 Here is a reference that predates the U.S. Civil War.

In the 19th century, blank books of laundry lists were available for purchase at finer stationers, amongst the diaries and expense books. 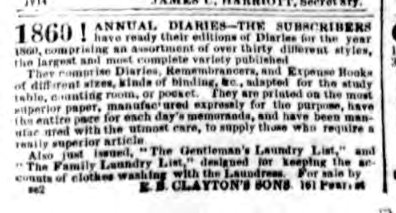 1860! Annual Diaries -- The subscribers have ready their editions of Diaries for the year 1860, comprising an assortment of over thirty different styles, the larges and most complete variety published.

Also just issued, "The Gentleman's Laundry List," and "The Family Laundry List," designed for keeping the accounts of clothes washing with the Laundress. For sale by E. B. CLAYTON'S SONS. 161 Pearl st