Why and when did 'Down's Syndrome' change to 'Down Syndrome'?

Having watched a charming video of 'Carpool Karaoke' with mothers and children on the World Down Syndrome Day website, in preparation for the twenty-first of this month, I noticed that 'Down's Syndrome' has been changed to 'Down Syndrome'.

Such is the wealth of information online about the syndrome that I have struggled to find among it a reason for the change.

Vivid memories remain from childhood of a remarkable young man who achieved much despite his condition but I have always called it 'Down's' and I assumed it was named after a doctor involved with its documentation. But the change makes that seem unlikely.

Some relevant articles: "Whose name is it anyway? Varying patterns of possessive usage in eponymous neurodegenerative diseases", by Michael R. MacAskill and Tim J. Anderson (2013), and "The synthetic genitive in medical eponyms: Is it doomed to extinction?", by John H. Dirckx (2001).

The abstract to the MacAskill and Anderson article says

The PubMed database was queried for the percentage of titles published each year from 1960–2012 which contained the possessive form of Parkinson’s (PD), Alzheimer’s (AD), Huntington’s (HD), Wilson’s (WD), and Gaucher’s (GD) diseases (e.g. Huntington’s disease or chorea vs Huntington disease or chorea). Down syndrome (DS), well known for its changes in terminology, was used as a reference. The possessive form was nearly universal in all conditions from 1960 until the early 1970s. In both DS and GD it then declined at an approximately constant rate of 2 percentage points per year to drop below 15%. The possessive forms of both PD and AD began to decline at the same time but stabilised and have since remained above 80%, with a similar but more volatile pattern in HD. WD, meanwhile, is intermediate between the DS/GD and PD/AD/HD patterns, with a slower decline to its current value of approximately 60%. Declining possessive form usage in GD and DS papers has been remarkably uniform over time and has nearly reached completion. PD and AD appear stable in remaining predominantly possessive.

Here is Figure 1, which presents the relevant results in graphical form: 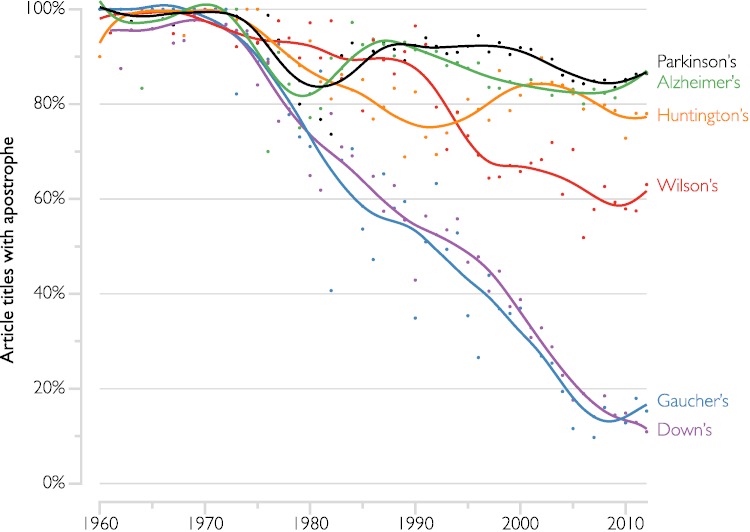 The results summarized in this figure don't differentiate between different varieties of English. (Although PubMed is "developed and maintained by the National Center for Biotechnology Information (NCBI), at the U.S. National Library of Medicine (NLM), located at the National Institutes of Health", the database contains literature that was published in the UK as well as literature that was published in the US.) But there do seem to be notable differences in usage between American English and British English in this area. MacAskill and Anderson analyzed the use of "Parkinson's disease" vs. "Parkinson disease" in UK-based vs. US-based journals general journals and found evidence that the rise of the latter form in US-based journals was influenced by changing editorial preferences. It seems probable that the rise of "Down syndrome" had a similar cause.

Possible phonetic pressures for the change?

John Lawler suggested in a comment beneath the question that certain phonetic features of "Down's syndrome" may have contributed to its becoming less preferred relative to "Down syndrome":

Down's Syndrome contains a /zs/ sequence from the 's S segment. In normal speech, such a sequence will delete the /z/ naturally, since it's simply a voiced version of /s/ [...] spelling [...] lags behind pronunciation, but it's catching up

This seems somewhat plausible, but the initial dominance of the spelling with 's, and the data in the MacAskill and Anderson article showing a parallel decline in the frequency of Gaucher's disease vs. Gaucher disease, indicate that a phonetic explanation is probably not the whole story even if it may have some applicability. While it seems hard to estimate exactly how much of a role phonetics may have played in the development of the spelling Down syndrome vs. other factors, I'd guess that other factors were actually more important.

[the form without the suffix -'(s)] is often chosen for proper names ending in s (Colles fracture, Graves disease) because, as mentioned earlier, many speakers pronounce Colles’s and Graves’s exactly like the uninflected (nominative) forms of the nouns. To a lesser degree, the form may be preferred before words beginning with an s or z sound, since the inflectional s of Marfan’s syndrome and Looser’s zones tends to be lost in speech.

This is a general phenomenon and is not limited to Down Syndrome. Here is a reasonable explanation from a doctor:

The medical profession has urged since the 1970s the dropping of the possessive S at the end of disease names which were originally named after their discoverers (“eponymous disease names”). The possessive is thought to confuse people by implying that the persons named actually had the disease. Thus “Ménière’s syndrome” became “Ménière syndrome,” Bright’s disease” became “Bright disease” and “Asperger’s syndrome“ became “Asperger syndrome.”

But the public has not always followed this rule. “Alzheimer disease“ is still widely called “Alzheimer’s disease” or just “Alzheimer’s.” Only among professionals is this really considered a mistake.

Wikipedia has a full-list of disease names, and all follow the rule of not using the apostrophe s.

26
What causes the euphemisation of medical terms?
3
Alzheimer disease or Alzheimer's disease?

6
Why and when did "crack" come to mean "tell"?
5
Why and when did 'hendiadys' change from its original 'hendiadyoin' spelling?
8
When did we start naming our dogs Rover, and why?
2
When and why did "bug" start referring to illnesses?
8
Why did "ich" change to "I"?
26
Why did the meaning of “garble” change so much?
16
Why and when did "fowls" start being called "chickens"?