When referring to light switches those that have two switches are known as 2 Gang, three switches 3 Gang... and so on.

Etymonline doesn’t give details in that respect, nor do other online dictionaries.

Where did this usage come from?

Early in the 19th century, various instruments like plows and saws were sometimes outfitted to have multiple parts functioning in one complete whole. In those cases, the tool would be referred to as a gang plow or gang saw, using the word "gang," meaning a group or set of things, to refer to the parts that make up the whole.

The OED provides this general definition:

a. attrib. Designating various implements or pieces of equipment having a set of coordinating tools or instruments, as gang-edger, gang plough, gang-saw, etc.

The earliest citation OED provides of this sense is from 1804.

The gang plough is made on the same construction as the companion-plough.

More detailed examples can be found in newspaper corpora, such as this passage that describes parts in a saw mill. Saws and plows seem to have been the most frequent instruments to be described with the "gang" compound in the 19th century.

On a beautiful plain, about 50 feet above the level of the little river, is the site of the Dwelling Houses, commanding at a distance of about 300 yards, a view of the sheet of water 160 eet wide, falling 12 feet over the dam; the mills in handsome operation, 4 single saws and 2 gangs, each exhibiting its velocity and power, and filling the valley with its racket. 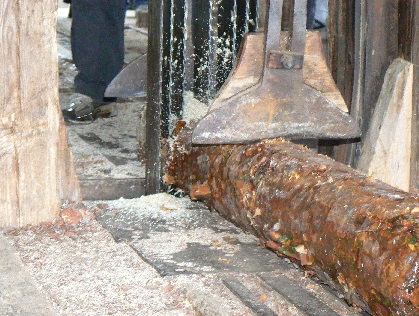 A gang-saw. Image from Wikipedia.

Later on, rather than referring to the equipment simply as a "gang tool," the number of components would be used to describe the arrangement, as in a "2-gang plow." This language is often found in advertisements and auction announcements from the late 19th century into the 20th century.

Notably, this OED entry refers to these compounds as forms of sense 7, and probably most notably 7.b.

7.b. A set of tools, instruments, or devices arranged to work in unison or coordination.

Here are some early citations of this sense, which give some idea of how it came to evolve from a noun to a noun-modifier. These examples also refer to saws and sawmills.

The planks are cut by a gang of ten or twelve saws, more or less, as occasion requires.

I had an opportunity of seeing in one of the mills..what is called a ‘gang of saws’; that is, a sufficient number to convert a log into boards by a single operation.

As technology advanced and language evolved, referring to "gang plows" and "gang saws" became less frequent, but the term remained in this exact sense when referring to lighting equipment. This is the case in the most recent citation OED provides for sense 7.

To run an outside light from the third ‘gang’, simply run a new switch cable to the light switch.

As pointed out in a post above, one of the meanings of gang is 'set', an example being "a gang of oars." Hence a 3-gang switch (a hyphen is preferable) is a switch with three individual switches.

Gang has more or less the same meaning in "a gang of criminals" = a group, or set, of people.

10
Where did the saying “Bite the dust” come from?
17
How did the slang meaning of “flog” come about?
7
I have questions coming out the yin-yang about yin-yang phrases!
10
Where does the word “wankers” come from?
23
What word did Middle English have in place of “light" as in: “light blue”, “light green” etc.?
3
Origin of “From the desk of…”
2
Origin of the phrase “close to the bone”
2
dual meaning of whereas
6
How and when did “jug” come to be a slang term for “prison”?
4
How and when did the ('chiefly British') sense of 'wheeze', meaning 'good plan, scheme' arise?