Through a Glass, Clearly / A Scanner Darkly / In a Mirror, Darkly / etc

I've seen a pattern in a couple of titles.

Curiously, 3 of the 4 are sci-fi. Any reason for the commonality of phrasing? Does it have some sort of meaning? Anyone know how it originated? Is it used in spoken English?

For now we see through a glass, darkly; but then face to face: now I know in part; but then shall I know even as also I am known.

The phrase through a glass darkly originated in the 1560 Geneva Bible translation of The First Epistle of Paul to the Corinthians, Chapter 13, verse 12. But, the phrase's popularity correlates with the overwhelming influence on English through the centuries of the King James Version (KJV, 1611), which utilized the wording of the Geneva Bible here and elsewhere. Meanwhile, the Geneva Bible has largely been forgotten.

The KJV was published in 1611 but it was highly dependent on a handful of English translations that preceded it, especially the 1560 Geneva Bible, which seems to be the first to translate 1 Corinthians 13:12 using through a glass darkly. A scan/replica of this edition is at archive.org complete with the title page indicating a 1560 date in Roman style: M.D.L.X. Here is a screen capture/grab of 1 Corinthians 13:11-13: 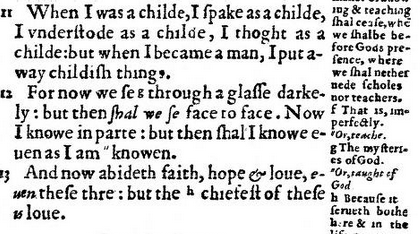 Using modern spelling 1 Corinthians 13:12 of the Geneva Bible is

The italicised phrase shall we see represents text not found in the Greek manuscripts.

The Geneva Bible was a tremendously popular and influential translation, not in the least because it highly influenced the translators of the KJV. The Geneva Bible was the Bible of Shakespeare, John Bunyan and the Puritans, who brought a copy of it on the Mayflower. It was the first English version to be subdivided into verses. It also contained marginal notes. It was so popular it was reprinted every year from 1560 to 1616.

Nevertheless, the KJV (1611) went on to surpass even the Geneva Bible in popularity, usage, sales, and influence while the Geneva Bible has largely been forgotten. And undoubtedly it is the KJV that popularized the wording that the question asks about–even if it did not originate it. The comma that the KJV introduced is not vital to the phrase's lasting popular usage.

Early English translations of 1 Corinthians 13:12, in modernized spelling, include the following. Notice how the Geneva Bible (1560) differs from preceding versions and that the KJV echoes it rather than reverting to the oft-used rendering "in/through a glass in a dark speaking"1.

1535 Coverdale
Now we see through a glass in a dark speaking...

It means now we see in or through a glass/mirror in a dark or obscure manner. The phrase is not used in everyday spoken English. It is a literary phrase. As such, some folks may say it sparingly.

1 Speaking is a noun which has a separate entry in the Oxford English Dictionary, with uses back to c1275, that is, about 1275.

The other answer provided the etymology, as far as the meaning:

To see “through a glass” — a mirror — “darkly” is to have an obscure or imperfect vision of reality. The expression comes from the writings of the Apostle Paul; he explains that we do not now see clearly, but at the end of time, we will do so.

Not the answer you're looking for? Browse other questions tagged phrases sentence-patterns book-title or ask your own question.

7
What are some of the most influential or obscure phrases and literary constructions drawn from the Bible?

1
Is "you are looking at the clock through the mirror" correct?