Difference between “help + [infinitive]” with and without “to”

Englishgrammar.org has an article discussing cases where an infinitive does not use the word "to." One case is with many causative verbs like "make" and "let."

I want the water to run

*I want the water run

I make the water run.

*I make the water to run.

It is also the case with "perception" verbs.

I see the water run.

I hear the water run.

The site describes "help" as a special case that can be followed by an infinitive either with or without "to."

She helps me stand.

She helps me to stand.

My question, essentially, is why "help" is a special case that can either ellipse the "to" or not, and what the semantic implications of that choice are?

My hunch is that since one category of other verbs that do not require a "to" infinitive are causative, the choice of whether or not to include "to" has a semantic bearing on whether the subject in the sentence is perceived as a causal agent.

So in the example, "she helps me [to] stand," we would infer from the inclusion of "to" that the subject (she) is less of a causal agent than when "to" is excluded.

It seems possible that there are no broadly applicable implications from the inclusion or exclusion of "to" in an infinitive following "help," that perhaps it is an aberration by way of etymology or coincidence, but I've been unable to find sources that analyze the case beyond identifying it as an outlier.

In the Google Books corpus of American publications, the construction help + bare infinitive, an American innovation, overtook its older equivalent with the marked infinitive around 1982 and has since skyrocketed in frequency. In Britain, help+BI, often still termed an Americanism or “informal usage,” is now favored by a substantial number of native speakers, though by a far less percentage than across the Atlantic. 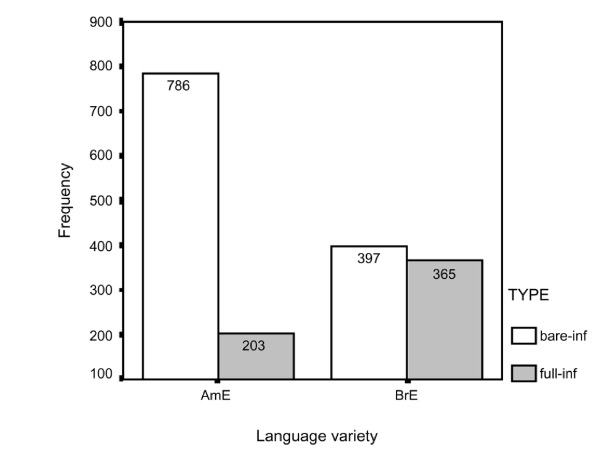 This construction is indeed an American innovation and a rather early one. Only eighteen years after the Declaration of Independence the first usage of help+BI appeared in an American newspaper:

A correſpondent obſerves that the public councils of this country can never be expected to proſper till the ſupreme executive ſhall employ the paragraphiſt of the General Advertiſer of this morning to help him keep the ſecrets of ſtate. — Gazette of the United States & Evening Advertiser (Philadelphia), March 05, 1794.

Further examples are sparse until a flurry in the late 1830s, almost exclusively from Vermont:

I would have voted at all hazards, and did vote, as the journals will show, on the last vote of the session, to help make a quorum and against adjournment. — Speech by Rep. Henry A. Wise (VA), The Charlotte Journal (NC), 4 March 1836.

…for they have set our manufactures ahead, and helped make us independent of Europe.— Burlington Free Press (VT), 4 Aug. 1837.

My danger was not over, for the women, considering the secret of my hiding place too weighty for their weak abilities, had called upon their neighbours to help them keep it. — Vermont Phœnix (Brattleboro), 29 Dec. 1837.

I often express a wish to my teacher that I could go to Virginia, and invite some of those kind people to help me find my dear dear father. — Letter from orphaned girl in Massachusetts, North Carolina Standard (Raleigh), 7 Feb. 1838.

We wish them [outstanding accounts] paid in order to help keep up our assortment. Burlington Free Press (VT), 14 June 1839.

Find out what the abolitionists are doing now, at the North! Help them do it.
…
If you want your abolitionist news fresh, help make it! — The Voice of Freedom (Montpelier VT), 22 June 1839

May their own beards be taken off by the aid of something more to their satisfaction than the razor-strap that, in an evil hour, I helped make for the comfort of my own toilet. — Vermont Telegraph (Brandon VT), 20 Nov. 1839.

By the mid-1840's, newspaper writers across the country were using the construction, but unless Rep. Wise of Virginia spent considerable time in New England unknown to historians, assigning an origin to this region remains only a tantalizing possibility.

Pro-verbs, Pronouns, and the Passive

The use of the marked infinitive is strongly favored even in America when the dependent verb is the pro-verb do:

Nevertheless, there are educated native speakers who choose the bare infinitive:

In August 1997 I decided that the only way I could write this book would be to give up virtually all my lingering university commitments. I thank everybody who helped me do so.

The marked infinitive is obligatory when it is the antecedent of the dummy subject it:

It helps to be given choices, and not told what is best for me… It helps me to know more about the person who is helping me.

But not when the pronoun has a real antecedent:

…that minibus is one of the most important things in the senior citizens community to me, because it helps bring the elderly into town and it helps take them to the doctors.

The marked infinitive is also obligatory when help is in the passive voice:

MITSUBISHI ELECTRIC was helped to complete a major project in Taiwan after South African consultants took over from an inexperienced Japanese team.

The verbs need and dare have been considered at least semi-modals in taking a bare infinitive.

He dare not go.
He need not go.

Dare is interesting in that while "He dare not go" sounds like a line in a bad nineteenth century melodrama, "Would you dare say that to him?" has no such allusions and is quite current and can be used both with and without the infinitive marker. This usage most closely parallels that of help.

A rapid rise in usage of help+BI does not suggest large numbers of Americans discovering a long lost sense of to help and suddenly applying it in everyday speech. Nevertheless, some have attempted to tease apart some semantic distinction between the two uses. One scholar suggests this minimal pair [McE-X 2005, 170]:

The distinction that while Mary helped John by eating a share of the cake, she actively helps John perform an action himself, even if she's doing all the work.

For the first "no leftovers" option, there are plenty of examples:

I wanted to try something new and different and was intrigued by the Potato Taco on the menu, so that's what I tried out while my husband chose the Tostada Bowl (which I helped him eat!).

Dinner was delicious and we all sang happy birthday to Jack and helped him eat his cake.

And also for the second:

She's helped me to walk and eat, to get showered and dressed, to go to the bathroom. I have needed her. — Lisa Genova, Left Neglected, 2011.

Unfortunately, however, war, accident, and debilitating disease have left many Americans unable to do basic tasks without help, and they have described their experiences with the favored construction:

My hands were injured in the blast, so it was very hard to feed myself early on. My family helped me eat.

His buddies brought milkshakes from the Sonic and fat chili dogs with cheese and helped him eat while his hands were still in the bandages.

I helped him eat and drink as he had motor movement problems and had trouble doing those things on his own.

Carreno explained how the cashier shut down his register during rush hour, cut the man's food into smaller bites and helped him eat.

The modern usage of help offers two choices of dependent infinitive construction: the bare or marked infinitive. The choice of one over the other is solely a stylistic choice for speakers of American English, and today, most likely for British speakers as well. The choice oftens seems arbitrary:

Not only will this new revenue help to pay for health care, it will help prevent children from taking up smoking in the first place. 1997

Headline: Mondo Helped me to find the best job, Expecially Mary Schadler
Text: Mary helped me find the right job and kept me updated with the whole process…

There is no possible reason for choosing one infinitival form over another except the writer's choice.

I use an ngram with two search terms (_PRON_ stands for pronouns and _VERB_ stands for verbs) to answer your question:

I am not an etymologist, I just read the graphs, so I cannot help you identify what triggered the increase in the version without to. Judging from the ngram, however, I'd look for something in the 1940-1975 period (or perhaps even a bit earlier), that's the period just before and the early beginning of the increase.

I would say it's merely part of the current usage.

The verb 'help' can be used with or without 'to', and it's just how the verb is currently used. There can be no clear 'why,' because it's just the way it currently is.

If there were any clear 'why', then this usage shouldn't change at all over time. But as we all know, that's probably not the case. The usage of the verb 'help' has been constantly changing over the last few centuries, and more likely than not, it will change in the next few centuries or sooner. Someday, for example, no native speakers might approve of 'to' in 'She helps me to stand'. It's just that nobody knows it yet.

So even the fact that the version without 'to' is more prevalent is also part of the current usage.

Another way to prove this is by comparing other verbs that are semantically similar. For example, let's see 'assist':

*She assists me stand.

She assists me to stand.

That is, what can follow the verb, bare infinitive or to-infinitive or both, is entirely part of the usage of the verb, and as such there can't be any why.

Not the answer you're looking for? Browse other questions tagged etymology infinitives semantics or ask your own question.

91
What is the correct way to use infinitive after the verb “help”: with or without “to”?