In first person shooters (first appearing 50 years later*), however, the word strafe has been used to describe the player character moving sideways relative to the orientation of view pretty much since the dawn of first-person gaming (at least on the PC). How did the word come to be used this way, and what/who was the first?

* Wolfenstein 3D released in 1992, possibly the first use of strafe with this meaning

I suggest a logical link from the WWII low-flying fixed-wing aircraft, through helicopter gunships such as the UH-1 Iroquois with their side-firing machine-guns, then on to late 80s/early 90s helicopter games and assorted shoot-em-ups to FPSs. I assume that for most of this time, the player was firing while moving sideways.

The first step (from fixed-wing to helicopters) seems logical, following the change in which aircraft carried out low-flying ground-attack missions. There are plenty of reports of helicopters strafing targets from around this period, such as

It's certainly clear from some of these sources that forward-firing guns (and for that matter fixed-wing aircraft) were used, but this (more modern) picture of the side armament of a UH-1 gunship clearly shows the door-gunner's machine-gun: 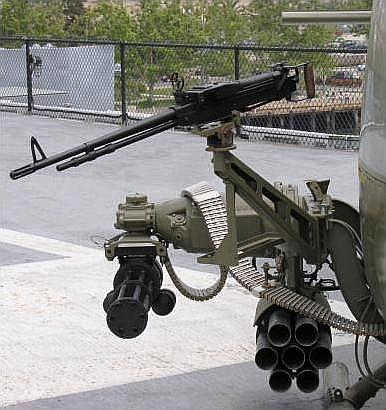 Crucially such guns would be fired while the gunner was moving sideways (as he faced out the door -- this traversing fire seems key.

The next step is into gaming -- in the late 80s and early 90s there were many helicopter flight-sims, though of course they're from the pilot's viewpoint. This was also the era of vertical- and side- scrollers, and I recall side-firing guns being a power-up in some such games (such as the space-themed Hellfire)

In general strafing by moving sideways while firing was commonplace in scrolling shoot-em-ups, thus predating the FPS use in Wolfenstein by a few years.

Both Zaxxon from Datasoft and Blue Max from Synapse are three-dimensional flying shoot-em-up games with landscapes that scroll one pixel at a time. In each case ... In both games you have to strafe the enemy on the ground, and fight enemy planes in the air. Zaxxon is ...
Practical Computing - Volume 7 (1987) Page 134 (unfortunately the preview is minimal and misses that text)

but the reward comes in the form of a nice easy strafing job on what looks like a large rocket.
ACE Issues Oct 1987-April 1992