Where is Ogden Nash's “piece of cake”?

Prompted by the answers to my EL&U question, Pinpointing its origins is not a “piece of cake”, I endeavoured to find out who was right. Did the idiom begin life in the US, in a poem written by Ogden Nash, or was it coined by the British RAF around 1938-1940?

Her picture's in the papers now,
And life's a piece of cake

It should be in his 1935 book, The Primrose Path, the OED and Phrase Finder claim it is the first time the idiom, a piece of cake, appeared in print.

Well, you would think it would be easy as pie to unearth the doggerel in its entirety. We are, after all, on the Internet but you would be sorely mistaken. Try as I did, I did not find the line that preceded or followed the cited verse. I Googled, scoured the net, and followed promising leads all of which lead to nothing.

I tried via Internet Archive but no preview is available, I have since registered and I am currently on their waiting list 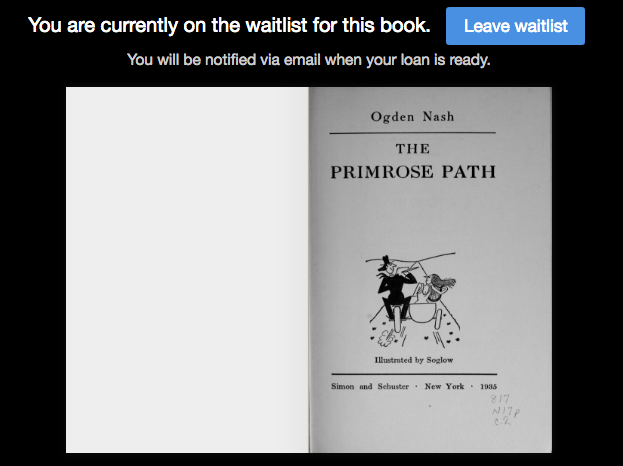 I used Google Books to search the exact phrase, but that too failed miserably. Here are the screenshots that show my failed attempts: 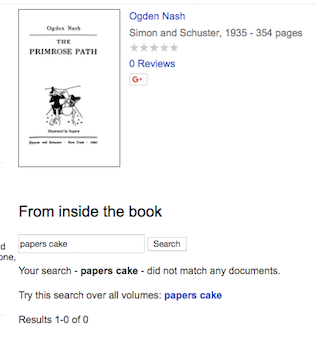 Entering "cake" in the search box pulls up two results, both of which are unrelated to the idiom "a piece of cake". 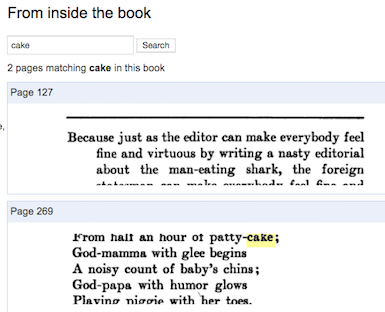 To give users an idea of Ogden's poetry, here is the only verse I found online that was published in The Primrose Path, it is about a pig.

Who’s afreud of the big bad dream?
Things are never what they seem;
Daddy’s bowler, Auntie’s thimbles,
Actually are shocking symbols.
Still, I think, a pig’s a pig –
Ah, there, symbol-minded Sig!

I searched for "pig" in the Google Books search box, and a snippet appeared, although it says “Daddy's Derby, Auntie's thimbles.” Yet, I cannot find the verse or the title of the prose that proves Nash first used the idiom, a piece of cake, and not the RAF. It is baffling that Ogden's poem, used as supporting evidence by innumerable sources, is unfindable.

So the book arrived today and I found the sentence, exactly on the page stated in 1006a's answer (page 172). I added some more links to photos at the end of my answer.

I also recommend reading the comments (both on the question and the answers), there are some interesting references to earlier versions of the poem in which "And everything is jake" took the place of "And life's a piece of cake". It remains unclear whether the change was made by the author himself or a (British) editor. 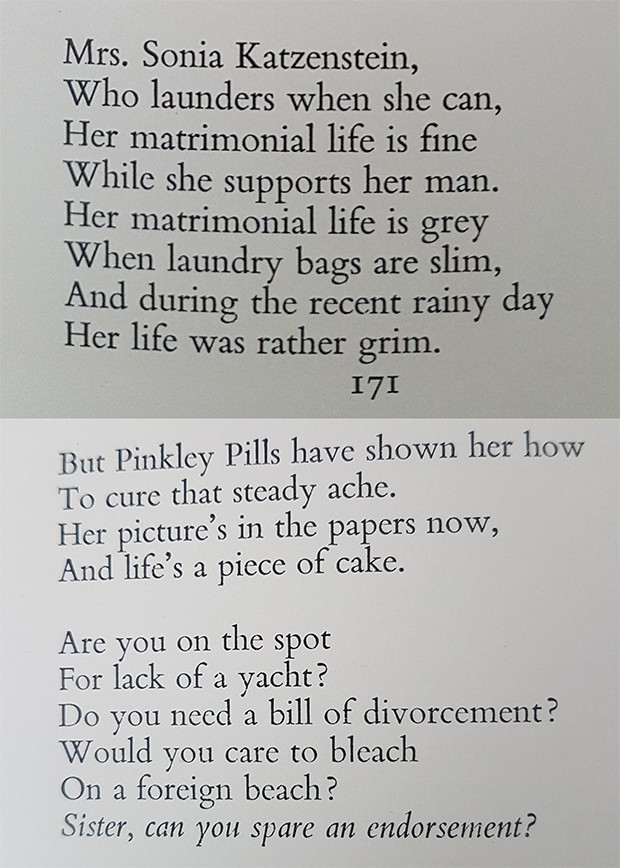 First page of the full verse

Second page of the full verse

Ogden Nash was a twentieth-century American poet, who authored over 500 poems. One of his books of poems was The Primrose Path,

The OED seems to be the source of the original citation of Nash's The Primrose Path as the earliest identified figurative use in print of "piece of cake". The online entry for piece1 includes, under Phrases, this entry and attestation:

piece of cake n. colloq. something easy or pleasant.
1936 O. NASH Primrose Path 172 Her picture's in the papers now, And life's a piece of cake.

The citation details given are

According to WorldCat (an online catalog of libraries around the world), there were at least two editions, one published in 1935 in New York by Simon & Schuster and the other in 1936 in London. They seem to be rather different; the US edition is 354 pages of apparently all original works, while the UK edition is listed as a slim 218 pages and apparently contains "A selection from 'The primrose path' & 'Happy days': also a few other verses ..." (although the WorldCat entry for that version lists 354 pages).

These differences may explain why, of the twelve words and phrases that the OED attributes to Primrose Path, I was only able to locate six in the 1935 book, not including "piece of cake".2 Of these, only one was on the page listed; the rest were randomly redistributed. On page 171, which is the cited page for the "piece of cake" quotation, there is a poem "The Strange Case of Professor Primrose" about an absentminded professor who accidentally becomes a Pullman Porter.

Interestingly, where the OED has "tank" (of beer) the version I have has "mug". This is similar to the "derby"/"bowler" difference raised in the original question. If Nash's British editors made a practice of suggesting (or unilaterally making) changes to the text, perhaps to make it more accessible to British readers, that could explain how an allegedly British phrase turned up in a book of poems by an American author.3

1 "piece, n." OED Online, Oxford University Press, January 2018, www.oed.com/view/Entry/143547. Definition P.15. Unfortunately, the OED is a subscription service; many people, including most UK residents, can access the OED online through their local or institutional library. Check with your librarian for more information.

2 Clicking on the link to "find more citations from Primrose Path" leads to quotations for the following twelve words and phrases; my findings or lack thereof are in parentheses:

3 In fact, @Sven Yargs was able to track down a very similar line to the OED's "piece of cake" quotation, but without the phrase in question:

Her picture's in the papers now, And everything is jake.
—Ogden Nash, Many Long Years Ago, 1941 (snippet view)

Not the answer you're looking for? Browse other questions tagged etymology idioms american-english or ask your own question.

13
The conflicting origin of a “piece of cake”

5
Is a whole cake still a “piece”
12
You cannot “eat your cake and have it” or “have your cake and eat it”?
0
“Piece of mind”
0
Meaning & usage of “buy me cake”
1
birthday cake times twelve
13
The conflicting origin of a “piece of cake”
4
Why is the phrase “cake walk” informally used to describe an easy to achieve task, while its origin says a different story?
2
“Worth their gold”, “worth its gold” - are these expressions idiomatic?