Is "acediast" too rarefied to be acceptable in literature? [closed]

I'm editing a manuscript where the word "acediast" appears a perfect fit, but Merriam-Webster is the only online dictionary I can find that lists it as a word, with the exception of a few scrabble word finders. In fact, searching for the word in Google brings up only ~6k results, compared to ~800k for "acedia."

Question: Does there come a point where a word is considered too archaic to be used, even in literature, and are there any reliable sources that go into detail on this subject?

Edit: As some have pointed out, this question was based on the false premise that "acediast" was an archaic word, when instead it is a neologism that never caught on.

The Merriam-Webster online entry for acediast suggests its first appearance wasn't until 1934. That in all the generations of English-speaking scholars and theologians coming to grips with Aquinas' discussion of the deep spiritual apathy inherent in acedia no one thought to coin a word for someone who suffers from this condition — or commits this sin — until 1934 should tell you that had they coined a term, it most likely wouldn't have been this one.

The inevitable conclusion is that the word is not archaic; it was simply a neologism that never caught on. There are also no -ist/-ast agent nouns formed from any of the other Seven Deadly Sins either: superbia, avaritia, luxuria, invidia, gula, ira. We also don't say *greedist or *bipolarist.

If the creation of the word itself was a lousy idea, it's likely an equally lousy idea to use it today. 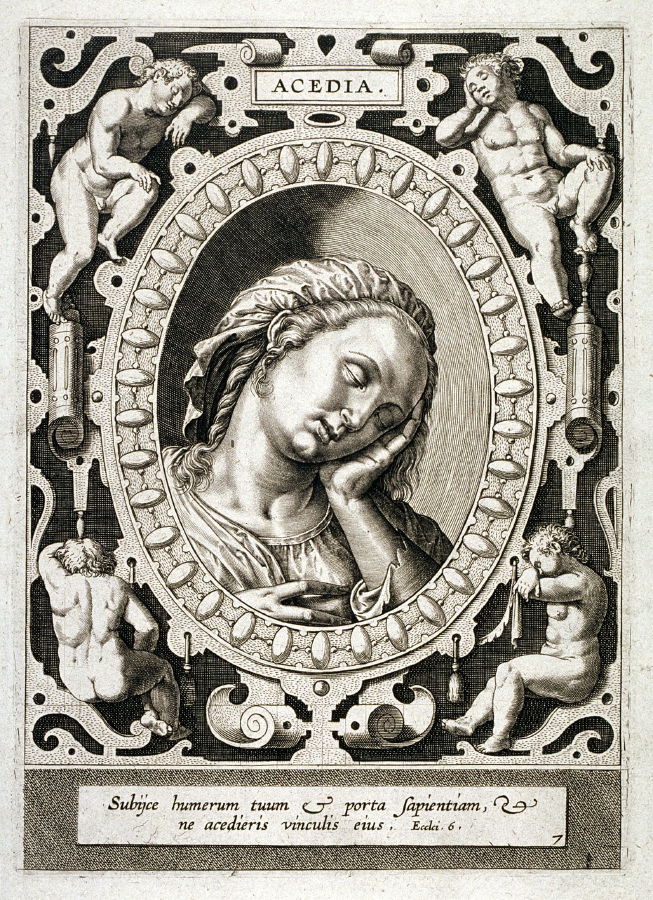 The inscription is from the Vulgate translation of the Book of Sirach (Ecclesiaticus) 6.26: "Bow down your shoulder, and bear her [personified Wisdom], and be not grieved with her bands." Engraving by 16th century Flemish engraver Hieronymus Wierix.

There are writers who enjoy teasing readers by using words that they are pretty sure no-one will ever have seen before. If your aim is to communicate, rather than to tease, you would be well advised to use a word your intended readers will understand.

This question seems to be based on a few false premises.

As KarlG points out, "acediast" doesn't seem to have ever been appreciably more common than it is presently, so it doesn't seem right to describe it as an "archaic word" (a description that implies that it was once more common than it is today). (The formation, as opposed to the specific word, does seem to have existed since Ancient Greek: Liddell and Scott's Greek-English Lexicon has an entry for ἀκηδιαστής (akēdiastēs). There are also a few examples on the web of parallel forms in other languages, like acediaste in French and acediasta in Portuguese, although I was only able to find examples of these in documents from recent years.)

Since there is no official specification of the English language, there is no authority that can prevent you from using difficult-to-understand, archaic, or even newly invented words in your writing. But depending on what the author's goals are, it might be wise to avoid doing that. That's a matter of writing advice, though, and so outside of the scope of this site.

Not the answer you're looking for? Browse other questions tagged word-usage latin archaicisms greek or ask your own question.

8
Is it acceptable to mix Latin with English?
5
Is yea an acceptable replacement for yeah?
1
In what context is the plural of genius, "genii" acceptable to use in a sentence?
2
Is "kudos" given someone for past events only — or does near-future work, too?
12
Is "less good" acceptable?
4
What's a single word for someone who writes literature?
2
Is 'steel-toed' shoes acceptable usage?
8
Is using the plural form (in place of the original singular) of these Latin/Greek loan words acceptable?
2
"... His entreaties which are hearkened/hearkened unto by God"