“Never don't give up”

I'm a bit confused of this phrase "Never Don't Give up". What does it actually mean? Never give up or just give up @.@ Please advise. ***Thank you so much for all of your help.
At first I really confused why he/she wanted to have that tattoo? Now I got it:) Thanks! 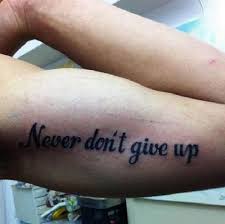 I see it in the tattoo picture. Does it supposed to be motivate someone to never give up?

It's a joke tattoo.

Two common (to the point of being trite cliches) phrases are "don't give up" and "never give up".

The tattoo combines them to make a joke, because the combination technically is a double negative that literally means "always give up".

It's not English. I don't think any native English speaker would say Never don't give up.

Many English speakers, however, would say Don't never give up. It's not grammatical in any standard English as far as I know, but it is grammatical and common in several non-standard varieties of English.

Some people will tell you that it "means" always give up. They have plenty of authority on their side, but they are talking nonsense. When any English speaker hears somebody say Don't never give up, they may complain about it, but they perfectly well understand that the speaker means Never give up, and claiming that it "means" something different from what they invariably understand it to mean is absurd.

Not the answer you're looking for? Browse other questions tagged meaning phrases phrase-meaning double-negation or ask your own question.