The terms “Portrait” and “landscape” are used to describe the orientation of content relative to a page or screen. 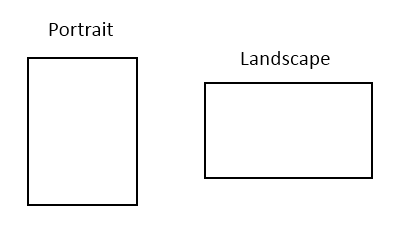 For the sake of keeping file names short and concise, what would be the best way to abbreviate these terms?

I am thinking “vert” and “horiz” could be good, for vertical and horizontal. But I'm not sure if they would add to confusion, since they deviate from the standard terminology.

I am also considering “port” and “land” as well, but I don't like that those words have their own meanings by themselves. It could cause confusion.

Maybe “y” and “x” corresponding with the longer of the axes? Or is that simplifying too much?

For English speakers receiving a file that will look something like jobname_print_a4_des01_landscape_0221 for example, it seems inefficient having the longest word in that string be only for the purpose of describing the orientation.

Is there a commonly agreed upon way to abbreviate these words? Web searches have turned up nothing for me.

A non-English-speaker asked me for advice on this and I couldn't give a good answer, so the files went out with a number corresponding to each of the two orientations. But for the future the question still stands, because I feel like it's the sort of thing that would have a convention.

In Japanese the orientation would be expressed with a single kanji character for each (縦, 横), and even if adhering to an alphanumeric file naming convention, they could be written as “tate” and “yoko” respectively (concise, and understandable to a Japanese recipient). To a typical English speaker these would just look like people's names.

I don't think there's a commonly agreed upon designator. As a graphic designer, I mostly see the abbreviations vert and horiz used in filenames. I don't recall seeing port and land but I have seen portrait and landscape, maybe because filenames can be so long now, I think it's just as easy to use the full words, as in your example. I suspect the vert/horiz abbreviations may be from older folks who, like me, have been doing this a while and like to shorten the filenames as much as possible because there used to be a fairly stringent limit.

Not the answer you're looking for? Browse other questions tagged abbreviations convention or ask your own question.