The conflicting origin of a “piece of cake”

Finding the precise history of the idiom, a piece of cake, is no picnic as I discovered.

According to the websites: The idioms.com and Bloomsbury International (a British language school), its origins can be traced back to the late-nineteenth century US.

It is believed that this phrase was invented in the 1870s during slavery in the southern states of America. As part of a dance or celebration organised by slave owners, black slaves would compete in ‘cake walks’, performing a dance which imitated and subtely [sic] mocked the elaborate and ostentatious gestures of the white slave owners. The most elegant couple/team would be given a cake as an award.

The “prize” for best dancing African American couple was a piece of cake, ergo...

The piece of cake that was awarded as the prize to the best couple/team, came to be known among the blacks as something very easy to obtain. (A sort of underhand and hidden insult to unknowing white ruling class.)

Now, I'm dubious whether slave owners and their families would generously share their dinner desserts with human "property", but it could be possible, and I admit I know next to nothing of the traditions that were held in Southern-American homes before the civil war, but according to History.com slavery was abolished in the US in 1865. So weren't African American slaves freed by the 1870s? Would slave couples continue to dance, and ridicule their "owners" (or "employers") in front of their very eyes?

This phrase is of American origin. At least, the earliest citation of it that I can find is from the American poet and humorist Ogden Nash's Primrose Path, 1936:

"Her picture's in the papers now, And life's a piece of cake."

The choice of cake or pie as a symbol of ease and pleasantry is well represented in the language. Other phrases along the same lines include 'as easy as pie', 'a cake-walk', 'that takes the cake/biscuit'.

Vocabulary.com suggests that the origin of "cakewalk" is much older and includes the following definition

The Americanism cakewalk, used to mean "something easy," came first, in the 1860's — piece of cake wasn't used until around 1936. Both cake and pie have a long history in the United States as metaphors for things that come easily.

The search continues, according to American Heritage Dictionary, the idiom is British!

Something easily accomplished, as in “I had no trouble finding your house-a piece of cake”. This expression originated in the Royal Air Force in the late 1930s for an easy mission, and the precise reference is as mysterious as that of the simile easy as pie. Possibly it evokes the easy accomplishment of swallowing a slice of sweet dessert.

The following question, Idiom origins: "Piece of cake" and "Walk in the park" and "Close, no cigar"? is related but was closed for lack of research and also I suspect for being too broad. Furthermore, the only answer posted cites the 1870s origin written by Bloomsbury International as supporting evidence.

Probably the often cited relation of the origin of the expression piece of cake with cakewalk is only incidental. As suggested in the following extract from The Grammerphobia the idea of cake as something pleasant and easy (to swallow) dates back at least to the 16th century. Piece of cake may be just a later version along those lines:

The Oxford English Dictionary doesn’t comment on the difficulties of cake-making, but it agrees with you that the colloquial phrase “a piece of cake” refers to “something easy or pleasant.”

How did cake get this reputation?

As the OED explains, cake is associated figuratively, especially by children, “as a ‘good thing,’ the dainty, delicacy, or ‘sweets’ of a repast.”

Cake comes off as highly rated in other phrases as well.

The expression “you can’t have your cake [that is, keep your cake] and eat it too” dates back, in various forms, to the 1500s.

The phrases “cakes and ale” (in England) and “cake and cheese” (in Scotland) have been used since the early 1600s as metaphors for the good things in life.

Similarly, the 19th-century American expression “*to take the cake” means “to carry off the honours, rank first,” the OED says, adding that it’s “often used ironically or as an expression of surprise.”

And of course, any extra trimmings in the way of good luck will inevitably be described as “the icing on the cake” (1969).

“a piece of cake.” The OED’s first citation comes from a collection of light verse by Ogden Nash, The Primrose Path (1935): “Her picture’s in the papers now, / And life’s a piece of cake.”

The AHD has a different suggestion, as you noted, as to its origin, but both sources see its earliest usages from the ‘30s. I’d point out that the supporting idea is the same:

Possibly it evokes the easy accomplishment of swallowing a slice of sweet dessert.

Note that the Primrose Path was published in 1935, not in 1936 as a number of sites suggest: 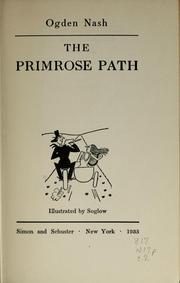 3) Is the idiom “piece of cake” American or British?

The sites The Babbel Blog, Smartling and mainly Not one-off Britishism classify “a piece of cake” as an AmE idiom.

“a piece of cake” is as American as red velvet cake.”

It's a Piece of Cake or R.A.F. Slang Made Easy, by Squadron Leader C. H. Ward-Jackson; The Sylvan Press, London

as noted in Aeronautical Engineering Review

[page 74] These few etymologies have also served to show that there is no one "right" source or explanation for an expression, for the expert philologist or lexicographer may himself only be guessing. Partridge, the premier expert on English slang, proves this point as he has attempted through the years to trace the origin of "it's a piece of cake." This expression, once popularly heard in the R. A. F. remains alive in the language of the Air Force transport pilot in the adjectival phrase, "piece a' cake".

An early printed example is in the newspaper article Berlin is Easy for the Western Mail 12 September 1940:

A comment of another kind from a young air gunner was: "Compared with some other places in Germany, going to Berlin was a piece of cake.”

The same line also appears in a book entitled Through the Dark Night, written by war correspondent and British novelist, James Lansdale Hodson.

In the 28 July 1933 Hawick News and Border Chronicle (Roxburghshire, Scotland), on page 1, there is an advertisement saying:

A stick of dynamite is like a piece of sponge cake compared to the dramatic punch in "ATTORNEY FOR THE DEFENCE"
Featuring Edmund Lowe, Evelyn Brent & Constance Cummings.

and advertising the same movie in the 27 September 1933 Kirkintilloch Herald (Dunbartonshire, Scotland), at page 5:

...stick of dynamite is like a piece of sponge cake as compared to the dramatic punch in this great picture

The inclusion of the word "compared" and the reference to cake as a harmless thing seems consistent with later RAF usage.

the Italian defences are just a piece of cake compared with the Germans', said one pilot

12
Why is "taking a biscuit" a bad thing in the UK?
5
Where is Ogden Nash's "piece of cake"?
4
Why is the phrase "cake walk" informally used to describe an easy to achieve task, while its origin says a different story?

5
Is a whole cake still a "piece"
13
What is the early recorded use of "white trash" and has its meaning changed over time?
25
The origins and usages of "waffle"
10
Was “tickle (someone's) fancy” originally a double entendre?
3
Is there such an idiom as "to turn a cold ear toward somebody"?
4
AmE usage of "tick off"
2
History and growth of "Snowflake"
5
Where is Ogden Nash's "piece of cake"?
4
Origin of “name and shame”
6
“I hope she hangs the moon”