Which native English speakers are linguistically the most “germanic”?

Which native English speakers are the closest to German basing on the following criteria?

There's no really good answer to this question, but we can take a stab at it if we accept some very broad generalisations.

English is a Germanic language by virtue of being descended from Proto-Germanic (which is a matter of geography and historical migration patterns). Setting aside the question of English dialects for a moment, among all the Germanic languages we can say that a language is "more Germanic" if it has undergone fewer changes since splitting from Proto-Germanic. The ideal way to do this would be to do a detailed inventory of linguistic changes apparent in a language and analyse how many steps might have been taken to get from Proto-Germanic to the modern language, but that's a load of work. A very broad generalisation that is less work would be to look at how many forks in the family tree exist between a language and Proto-German. This is much easier to see. (As an amusing aside, you can see from the family tree that Swedish is—among several others—"more Germanic" than modern German.)

Of course, such a detailed analysis of English dialects is also prohibitively complicated, but at least it gives us the conceptual framework to figure out that "oldest British Isles English dialect" is what we're looking for. So, we'll have to go with anecdote and hearsay: the Geordie dialect is the oldest dialect in the British Isles, according to current opinion.

The answer is all of them. English is a Germanic language.

A far better question to ask would be "What other Germanic language is linguistically most like English?" (Hint, the answer would not be "German").

The problem with the original question is that it seems to imply that the language we today call "German" is the root of the English language, and thus there must exist some dialect of it which has diverged the least from "true German".

What instead happened was that some speakers of a (low) German language moved to England and slowly their language developed on its own, mostly isolated from the original tongue on the continent, into what we call "English". Meanwhile people on the continent had their own dialects which evolved into what we today call separate languages such as "German", "Dutch", "Danish", "Frisian", "Norwegian", etc.

All of those, and English too, are "Germanic" languages. Whatever exact language was spoken by the early German immigrants to England (let's call it "Germanic"), modern Germans would be no more able to understand it than they can English. If you don't believe me, pick up a copy of Beowulf (written in Old English) and see how easy it is to read.

Oh, and I understand the answer to the question I posed, is "Frisian". It is the sort of light-tan area in the map of Germanic language areas below. 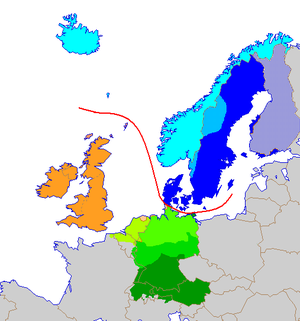 I will try to formulate better questions that come close to the original intent. I can't give definitive answers, but I think I can provide some insights.

Which variant of English is most similar to German?

Since Middle English was quite similar to the German of the time, more conservative dialects should be closer to German. E.g., English is gradually shedding all its irregularities of verbs and nouns. Since this process is much slower in German, an irregular plural or past tense in English usually corresponds to one in German, but not vice versa. (E.g. sing/sang/sung corresponds to singen/sang/gesungen, mouse/mice to Maus/Mäuse.) A dialect of English that has preserved many of these irregularities will be closer to German in this respect. I would expect to find such varieties in remote areas such as islands or mountain regions that were settled from the UK a long time ago and that haven't had much influence from any other language.

We also need to consider modern influences. In this respect, we shouldn't count only strictly German influence, because any continental West Germanic language will have essentially the same effect for our purposes. The varieties of English that have had the greatest influence of this type are probably in the US due to the large number of German, Dutch and Yiddish speaking immigrants.

I'm a native German speaker who spent years in England but only a couple of weeks in North America. I would have expected my English to be closer to British English than American English, but when I first tested it here last year, the algorithm guessed some form of American English. (Apparently the algorithm has been refined since. When I just retested, this is what I got: Ebonics, England English or New Zealandish. Native language German, English or Dutch.) I think this gives additional support to the idea that American English should be closer to German than British English.

Which variant of English is most similar to Proto-Germanic?

For this question we should again be looking for a conservative dialect. But this time we should include the other branch of the Germanic languages, i.e. North Germanic. Skandinavian languages have had a greater influence in the north of England and in Scotland.

Which variant of English is intelligible to the largest number of speakers of other modern Germanic languages?

There is very little 'natural' mutual intelligibility except to a very limited degree with Frisian (a small family of dialects spoken in the north of the Netherlands and of Germany) and to an even more limited degree with Dutch. Therefore the answer is rather boring: Any sufficiently standard variety of English will do the job equally well, but any variety with non-standard phonetics will be harder because those are not taught in English classes.

Speakers of which variant of English can understand the largest number of speakers of other modern Germanic languages?

I just don't know. I would be very interested if anyone had some insight to contribute. Maybe speakers of conservative southern English dialects are best at understanding Frisian and some Dutch? But maybe some speakers of northern dialects can also understand some Norwegian or Swedish? (I am guessing that Danish is harder due to the extreme phonetic changes it has undergone. But if these are largely parallel to sound changes in English, Danish should perhaps be first on the list.)

I would say Scots English is the most conservative English dialect if that's what you're asking. It preserves the most Middle English (germanic) vocabulary and pronunciation.

It's a braw, bricht, moonlicht nicht

pronunciation: They still pronounce the "gh" phoneme in words like bright, moonlight, and night. Note: its spelled phonetically as ch

Whaur dae ye bide? ( Where do you bide?)

Vocab: bide for stay/live. Lost in spoken English world-wide except in the phrase "bide one's time".

vocab: 'ken' for know. An obsolete word everywhere else.

vocab: wee for small, and bairn for child.

pronunciation: the w is still heard in two.

Not the answer you're looking for? Browse other questions tagged dialects accent germanic-languages or ask your own question.

-2
Why 'Germanic Languages' and 'Germanic Tribes'?

2
Is the line blurring between “accent” and “dialect”?
5
Communicate via written notes - although native speakers?
18
How to explain accent variations to students
8
Why the does 'tu' get pronounced 'tyu' in British English?
3
What is Germanic about English — and incomplete list. Can others add things I missed?
0
On the pronunciation of 's' in 'dislike' (/s/ vs /z/)