Is “couldn't have had a more encouraging XYZ than…” ambiguous?

Have a look at the following sentence –

He couldn't have had a more encouraging opening in films than our grown-up make-up boy had. On the contrary he must have had to face more uncertain and difficult times, for when he began his career,…

The reason I'm confused is that I have seen the sentence being used for both meanings. 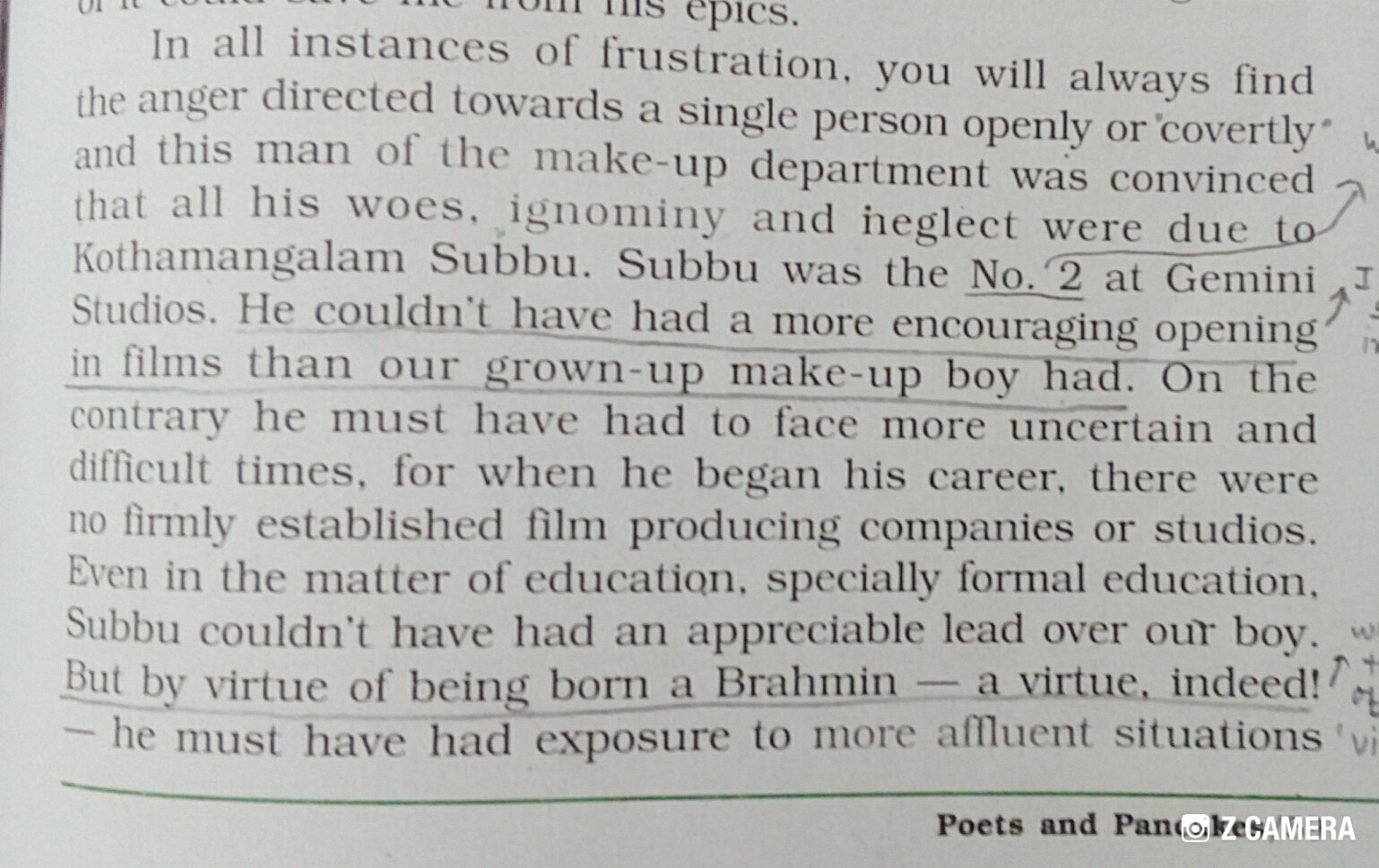 I do find the sentence confusing, too.

How I normally would expect this construction to be used is like this:

Our hero couldn't have had a better start in life.

In this case, the construction is comparing two characters in the narrative, though, where Subbu had a better start in films than our make-up boy.

I would have expected that to be something like

Our grown-up make-up boy's opening in films was nowhere as encouraging as Subbu's.

I feel that by combining those two parts in one sentence as happened in the text drops some essential information.

I would have gone for the slightly longer:

Unlike our grown-up make-up boy, Subbu couldn't have had a more encouraging opening in films.

After re-reading the text, I think I am justified in finding the sentence confusing...

The next sentence (on the contrary...) forces me to re-interpret the original sentence in a different, more literal way:

It can not be true that Subbu had a better start than our grown-up make-up boy.

In other words, the author may want to tell us that is Subbu is doing well, it is not because he had a better start than the make-up boy.

It is a bit challenging to figure out from this excerpt what message the author wants to convey. At first I thought he wanted to sing the praise of the make-up boy by explaining how he worked his way up even though other, privileged, people had an easier start in their career.
On second reading, the author may actually be explaining that Subbu, although he was born privileged, actually didn't have a flying start in the movie industry, but worked his way up the hard way, just like the make-up boy.

I think what's strange about this passage is that they're using wording that is normally idiomatic—couldn't have had a better ~—but they're not using it idiomatically. It seems what they really mean is that it isn't possible (or at least, is highly unlikely) that Subbu had a more encouraging start than the grown make-up boy had. And again in the later sentence, that it isn't possible Subbu had the better education of the two.

But we're used to the idiomatic use, where couldn't have had a better really means had the best, so we look for that meaning here. And it's not there. What's there is just the literal meaning of the words.

The adult make-up artist blames the younger make-up artist, Kothamangalam Subbu, for all his misfortunes (woes), yet the older man's career could not have enjoyed a better flying start.

In other words, "he" experienced little hardship–which I imagine refer to bouts of unemployment–because he had the fortune of being born in the Brahmin caste, which meant he was exposed to a wealthier class of people.

The Pali Canon depicts Brahmins as the most prestigious and elite non-Buddhist figures. They mention them parading their learning. The Pali Canon and other Buddhist texts such as the Jataka Tales also record the livelihood of Brahmins to have included being farmers, handicraft workers and artisans such as carpentry and architecture

The extract is confusing because it is not clear who "our grown-up make-up boy" is. In the line

He couldn't have had a more encouraging opening in films than our grown-up make-up boy had.

Is the noun phrase in bold referring to Kothamangalam Subbu or to the other person working in the same Gemini film studios? But if Sabbu was No.2 it was he who had the powerful and influential role, which means he must have been born in the Brahim caste. It is the make-up artist (presumably a young man but it's unclear from the text) who blames his personal misfortunes on Kothamangalam Subbu. However, when Sabbu first started in the Indian film industry, there were fewer movie studios and production companies than today, finding regular work should have proved to have been an enormous challenge, but his privileged caste opened doors for him.

Not the answer you're looking for? Browse other questions tagged meaning-in-context modal-verbs literature or ask your own question.

3
Usage of "must have" in past tenses
12
"Her mind was less difficult to develop" — Jane Austen
1
What does the meaning of the phrase "couldn't be more"?
9
can't have been vs. couldn't have been
1
Understanding "Couldn't have got"
1
Meaning of "thousand-fold" in this sentence