I came across this expression while reading Dickens's American Notes. In context it seems to mean something similar to "all-purpose" or "catch-all," and seems to appear most in English/Welsh writing from the mid-19th century. It's new to me.

There are few words which perform such various duties as this word ’fix.’ It is the Caleb Quotem of the American vocabulary. You call upon a gentleman in a country town, and his help informs you that he is ‘fixing himself’ just now, but will be down directly: by which you are to understand that he is dressing. You inquire, on board a steamboat, of a fellow-passenger, whether breakfast will be ready soon, and he tells you he should think so, for when he was last below, they were ‘fixing the tables:’ in other words, laying the cloth. You beg a porter to collect your luggage, and he entreats you not to be uneasy, for he’ll ‘fix it presently:’ and if you complain of indisposition, you are advised to have recourse to Doctor So-and-so, who will ‘fix you’ in no time.

Can anybody here shed some light on the origins and meaning of this expression?

As suggested in the Words on Words: Quotations about Language and Languages by David Crystal and Hilary Crystal:

Caleb Quotem is a character in George Colman’s The Review, or Wags of Windsor from 1808, a sort of “jack of all trades.”

it appears that the charecter of Caleb Quotem was originally invented in 1789 by Henry Lee in a homonimous farse. It was later adopted and made popular by George Colman in his famous play.

The usage in Dickens’ American Notes is obviously figurative. 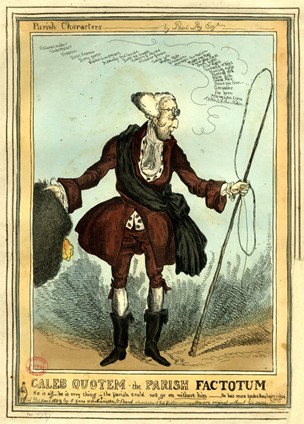 According to this source, a "Caleb Quotum/Quotem" is a jack-of-all-trades, either literally or figuratively, and a comic character in two popular plays of the day, first appearing in 1798:

Caleb Quotem is a character in a musical farce entitled Throw Physick to the Dogs by Henry Lee, which was first produced at The Haymarket Theatre on 6 July 1798. Its original title had been Caleb Quotem and his Wife, but this was changed at the theatre. Later on, portions of the play were pirated by George Colman, Junior, and occasionally produced in London during the early 19th century under the title of The Review, or the Wags of Windsor.

My name is Caleb Quotem;

In short I am factotum.

Well, if you're really looking for the etymology, I can tell you that Caleb is thought to derive from the Hebrew word; kelev, meaning "dog". It could also be a compound name from kal "whole" or "all of" (according to one source) and lev meaning "heart". So Caleb either means "dog", "wholehearted" or "as if with intelligence/heart/understanding"

According to the website, behind the name, the name is most popular in Northern Ireland, followed by the US, Canada and Scotland. In 2009, Caleb was the 31st most popular name for a boy in the USA. However, Caleb has since fallen steadily in popularity and in 2016, it ranked just 44th.

Quotem, as a surname, seems to be a nonce word. Its nearest equivalent in Latin would be quotus, in English quotum, meaning a part or proportion.

I also came across it in Dickens' The American Notes, and guess it has the same meaning as keyword or catch-word. Of course, it is quite obvious that Dickens is using the term figuratively.

Not the answer you're looking for? Browse other questions tagged meaning etymology obscure-terms eponyms or ask your own question.