What do you call the behaviour of "locking a door so that it cannot be opened inside without a key"?

For example, if you turn the key for about 45° to lock my house's front door from outside, it can still be opened from inside using the deadbolt knob without a key. But if you turn it for about 90°, then the key is needed even if you would like to open it from inside.

The lock of our front door looks like this one: 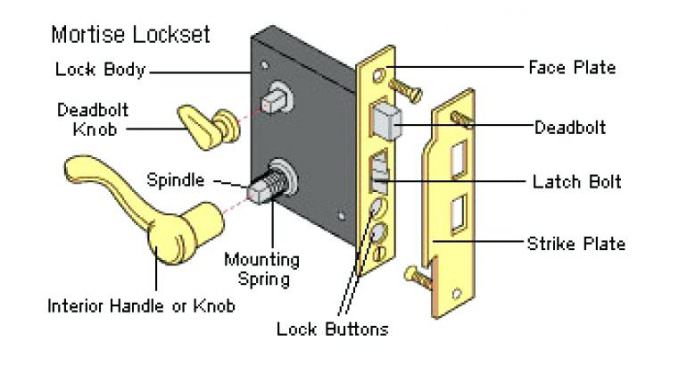 FYI I'm a native Mandarin speaker and I'm actually looking for the English word for "反锁" in Chinese.

Hey, buddy, could you please avoid _____ so that I can still open it directly from inside?

I believe the word you need is the verb deadlock. (Not to be confused by the noun a deadlock, which is a metaphorical sense.) It corresponds to turning the deadbolt in your diagram, as opposed to the latch-bolt.

When you deadlock a door, it is locked, full stop! It cannot be opened without a key (unless there is a deadbolt knob on the inside) . A traditional mortise-lock, such as we have on our front door (as well as a latch-lock) can only ever be opened, on either side, with the key. During the day, whilst we are around we normally keep it on the latch. But at night and when we go out we turn the mortise deadlock.

Older properties such as ours (built 1900) usually have mortise locks. But our rear door, which is on a much newer part of the house, also has one.

It means, if you have such a lock, to remember at night to leave the key close to the door in case you have to get out in a hurry, in the event of fire.

What you have is a lock which combines both a deadbolt and a latch-bolt, both turned with the same key, but which is not effective for the deadbolt until the key is turned 90 degrees.

You need to ask your friend not to deadlock the door, when he goes out.

I would describe the behavior of locking a door so it can't be opened from the inside as locking someone in.

For example, I would say "Could you please avoid locking me in? I need to be able to open the door from the inside."

At least in British usage, the verb and corresponding noun most usually used is probably double lock (though the term is admittedly fairly rare):

to lock by means of a double lock, or by more than one lock

We double-lock our doors and clutch comforting cups of tea.

M-W licenses the usage in 'AmE':

Definition of double-lock : to lock with two bolts or by two turns of the key : fasten doubly

'Deadlock' appears to be a hypernym:

Double lock: A type of spring lock which may be used as a deadlock by an extra turn of the key.

12
Word for "willing to try new and unfamiliar things"
7
What's a word for a positive kind of "envy" without the sense of resentment?
3
Is there a better phrase than "rules list" to imply something you need to read without carrying bureaucratic/procedural connotations?
0
Is "Sink" the proper word for responsibilities/people/projects that drains you without providing any benefit?
0
What is the word to signify "someone is yet having that specific relationship with me"
8
What's a word for setting up a mechanism to prevent you from doing something in the future no matter what you may say or do then?