My (BrE) OED and (AmE) dictionary.com both list the adjective 'middle-class' with a hyphen. The OED provides these examples:

The (AmE) CMOS provides these examples:

OED lists the adjective 'up to date' with no hyphens and provides these examples:

This technology is bang up to date.
up-to-date clothes

dictionary.com lists the adjective 'up-to-date' with hyphens CMOS and provides these examples:

His equipment was up to date
an up-to-date solution

It appears the principle of hyphenating compound adjectives before nouns is treated differently by dictionaries using BrE and AmE. It appears:

I hope someone has a satisfactory explanation. I fear I'm about to have a nervous breakdown. :(

I doubt whether this is anything to do with American of British usage, and I think you question is based on false premises which I shall deal with as an appendix. My doubt is supported (as far as this is indicative) by a Google ngram analysis of the use of the alternatives ‘middle class attitude’ and ‘middle class-attitude’ in British and US books: 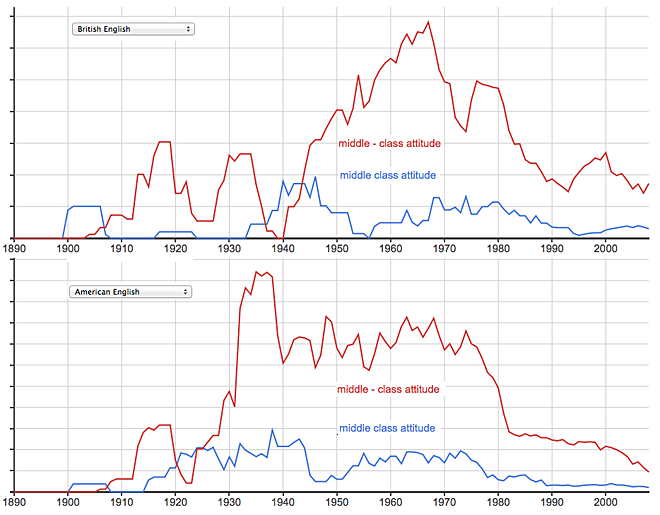 Of course, there may be differences in writing in journalism or specialized technical publications, but this does not lead one to believe there is any tradition of different usage.

The examples in Oxford Dictionaries online (not the OED) provide illustrations using what is recognized as standard good style to avoid what Fowler called ‘false scent’.

Consider the alternatives in the first example:

If I read (1) the noun ‘middle’ follows the article ‘a’, so for a moment I think the phrase refers to that. However it actually refers to ‘attitude’ and middle is used as part of a compound adjective. I have taken ‘false scent’ and have to readjust. If I read (2) the hyphen prevents this as I read ‘middle’ along with ‘class’. The writer has helped me read his work — regardless of my nationality — to the benefit of both of us.

Now take an example of the predicative use of the adjective (below). Here the noun ‘attitude’ precedes the compound adjective, so there is little chance of ‘false scent’ and the hyphen may be omitted.

His attitude is so middle class.

Addendum: False Premises in the Question

My answer attempts to address those parts of the question which I think are answerable and on-topic here, and avoids accepting the following, what I consider, false premises:

I think your focus on those hyphens in dictionaries may have over-specialised your question a bit.

I assumed that the use of a hyphen after the noun would simply depend on whether the compound adjective is treated as an established expression, and a quick search led indeed to grammarbook.com:

Generally, hyphenate two or more words when they come before a noun they modify and act as a single idea. This is called a compound adjective.

When a compound adjective follows a noun, a hyphen is usually not necessary.

Example: The apartment is off campus.

However, some established compound adjectives are always hyphenated. Double-check with a dictionary or online.

Example: The design is state-of-the-art.

Now, as is so often the case with spelling, that last bit doesn't actually help anyone to figure out how to spell a compound adjective. It merely explains why some of them take a hyphen.

So, going by your examples, it seems that the OED simply regards middle-class as an established compound adjective, or a set expression, whereas CMOS does not.

The real problem here is that deciding on how "established" an expression is, is a very subjective process, and without any actual, definitive, prescriptive authority on the English language, you will simply have to choose your own sources (i.e. dictionaries) if you want to back up your decision to use a hyphen in a compound adjective or not.

And yes, in general you will find differences between dictionaries roughly following the lines of different English dialects, but in some cases, as your middle(-)class example shows, even two dictionaries following the same dialect may disagree on the finer points of a compound adjective's being established.

Not the answer you're looking for? Browse other questions tagged american-english british-english dictionaries compound-adjectives or ask your own question.

2
“inquisitive” vs. “inquiring” in AmE and BrE
8
What's the AmE and BrE for “tartaruga”?
3
AmE vs BrE pronunciation of “piste”
2
Syntax of “two-letter word,” “five-mile run,” “three-hour play”?
0
Compound Adjectives Separated by “or”
6
On the usage of “turn” in spy stories
3
Status of sometime vs some time in AmE and BrE
4
Why do grammars claim that adjective+adjective is always a morphological compound and never a syntactic construction?