Where does the expression “spill the tea” come from? [closed]

According to Wiktionary, spill the tea (idiomatic, informal) means:

To disclose information, especially of a sensitive nature.

Apparently, the expression appears to be a recent one.

Can anyone tell me where it comes from? Is it British or American in origin?

The expression appears to have originated in American black drag culture:

It appears that T, also spelled tea, had a double-edged meaning in black drag culture. It could refer to a hidden truth, as Chablis uses it, and it could also refer to someone else's hidden truth—that is, gossip:

As drag culture—and particularly black drag culture—gained prominence, so too did this dual meaning use of tea. It's spread far beyond black drag culture at this point. The phrase "spill the tea," used as an encouragement to gossip, has been used in everything from Harlequin romance novels to "RuPaul's Drag Race"; "no tea, no shade" has been featured in explainers on black gay slang; comedian Larry Wilmore used "weak tea" regularly on his 2015-16 Comedy Central show in response to people who weren't telling the absolute truth.

The expression is American:

On the day that I was working on this video, I searched ‘spilling tea’ online and found that it was in the headlines. “Rob Kardashian’s Instagram Is Disabled, But His Tea Spilling Continues On Twitter”. Spilling tea means to gossip about someone. So here, Kardashian was gossiping about his ex-fiance, which included posting naked pictures of her. Not good.

The word 'tea' in this context is slang for gossip or news. For example:

"Girl, did you know Renee is having ANOTHER baby?"

The American version I believe is spill the beans. Spill the tea is most likely British (not that only British people drink tea.)

Presumably, the tea drunk in the Southern Sates must be sweet tea also known as iced-tea, and not the typical British cup of hot tea. 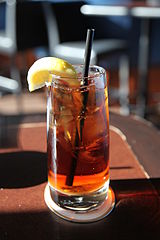 Not the answer you're looking for? Browse other questions tagged slang internet phrase-origin twentieth-century-language or ask your own question.