I know similar questions about how to answer negative questions were asked before. But still I am confused. 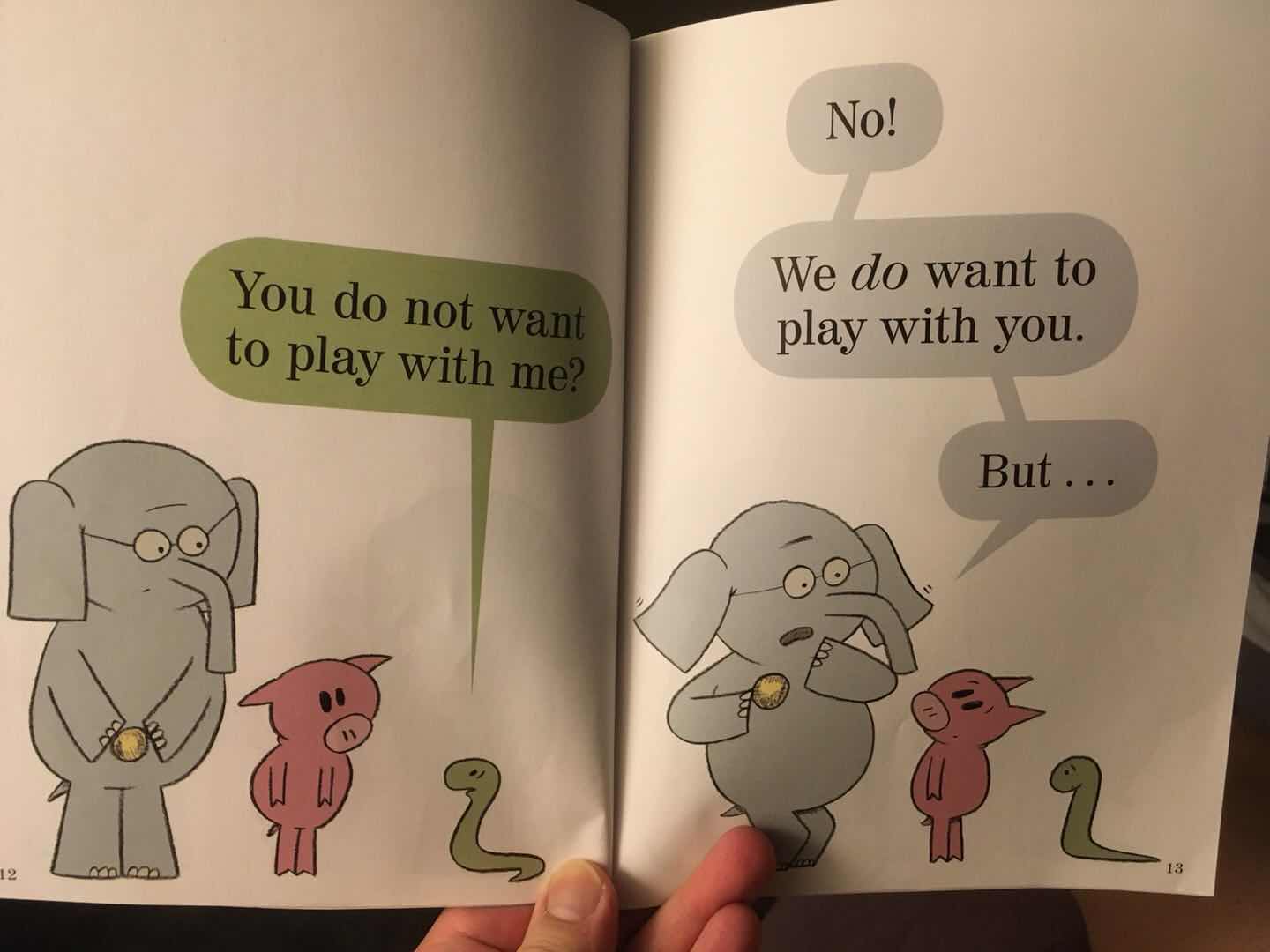 From Can I Play Too? by Mo Willems

questions negation
Share
Improve this question
edited May 16 '19 at 19:31

Conversational English often makes use of a negative that negativizes an entire implied negative utterance, and is not just a Yes or No answer in response to the verb. This is a kind of double negative at utterance level, and is perfectly grammatical and used for effect.

Question: "You do not want to play with me?"

If the Answer in the kid's book had been: "Yes", it would mean: Yes, that's right. I do not want to play with you.

The question being asked is not a simple yes-no binary one:

The question being asked is uttered through rising intonation of an utterance in the negative and implies an entire implied sentence in the response.

The word no refers to an implied utterance. There is no other possible interpretation here and in conversation, these implied sentences utterances are very common.

Question: "You do not want to go to the movies me?"

The yes or no to this question refutes or accepts the entire implication.

And I am sure that someone here can write this out in better logical or philosophical notation with brackets:

"Do you want to play?" A simple binary question

"You don't want to play?" A complex binary question with implied refutation of proposition.

N=No [It is not true |that I do not want to play|]. Double negative of a statement

And the amazing part is that very young children get it until they are browbeaten by adults. There is logic at play here, not just grammar. :)

'Yes' and 'no' function differently depending on the grammar of the question.

If the question is framed as a statement, and you only know that it is a question because of the '?' mark or the rising pitch, then 'Yes' and 'no' indicate positive or negative agreement with that statement.

If the question is framed as a query, by fronting an auxiliary verb, then 'Yes' and 'no' indicate the positive or negative polarity of the response (which may or may not have the same polarity as the question).

“Do you want to play with me?” could start a conversation, because it’s a wholly open question which assumes nothing.

Grammar is one thing but semantically and logically, the picture-book pages can’t stand by themselves. Worm can’t start the conversation with a negative question like “You do not want to play with me?” That would necessarily refer back to something said earlier which caused Worm to believe Elephant or Pig didn’t want to play.

In between the two would be “Don’t you want to play with me?” Less clearly, that would refer back to something which led Worm to suspect that perhaps Elephant or Pig might not want to play.

To “Don’t you want to play with me?” responses might be “No, we don’t” or - as in the book - “No… we do” or “Yes, we do” and please remember the emphasis is very different in each case.

Not the answer you're looking for? Browse other questions tagged questions negation or ask your own question.

129
Did English ever have a word for 'yes' for negative questions?

50
How to answer a negative question without ambiguity?
3
"Does he go bowling?" or "Doesn't he go bowling?"
2
Yes/no answer to "Have you closed all of your tickets?" if there were no tickets to begin with
1
Are there many words that come with “a” as the prefix to mean “no, non” like “asymptomatic” and “apolitical”?
0
How to respond to negative questions (adjectives)?
10
Playing sports - does swimming count?