What is the English term for "assume the least dangerous body pose when falling"?

In Russian, there is the term сгруппироваться ("to group yourself together"), which means "fold your body, bend your legs and arms". This action is believed to be helpful when falling, since it helps one minimize injury.

I looked up translations for сгруппироваться in Multitran and found these:

wrap; ball the legs; draw the knees up to the chest; tuck; tuck oneself up.

Which of them is the term you would most likely use in this sentence:

During training, while trying to perform a move, the athlete failed to ___, and he went sprawling.

Here's a description of this "group-yourself" action in Russian, with a picture: 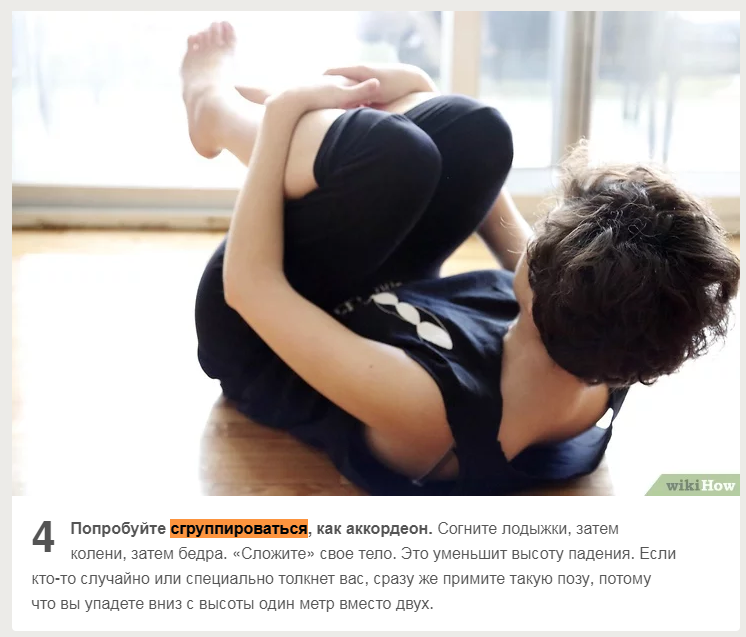 The term comes from diving:

In martial arts and some sports, adopting a specific posture when falling to avoid injury is called a breakfall or sometimes break fall.

It originates from the phrase "break one's fall" which is a more general phrase that means reducing the impact of a fall, but this phrase is more general, and while it could mean the person took action, it could also mean someone or something else helped reduce the impact, for example: "He fell out of the window, but the awning broke his fall, and he was not seriously injured."

There are various different breakfall techiques for specific situations, but the concept is the same: adopt a posture which allows you to roll and distribute the force of falling over time rather than having a sudden jarring impact. Martial arts breakfalls are also intended to allow you to quickly regain your footing and adopt a defensive posture.

Breakfalls may not always look exactly like the picture provided in the question, but they generally involve tucking or curling the body and rolling.

Examples: "During training, while trying to perform a move, the athlete failed to breakfall, and he went sprawling."

"Bobby, you need to work on your breakfalls or you're going to hurt yourself in the judo tournament."

You could say 'compose himself' while falling, which has the sense of 'organising the body tidily' and 'getting ready'. You can say 'composed himself into a ball'.

'Prepared himself for impact by composing himself into a ball'

He curled up to protect himself from impact.

Not the answer you're looking for? Browse other questions tagged single-word-requests phrase-requests translation or ask your own question.

10
English term for pre-thinker?
5
A word for the feeling of falling
13
Is there an English term for "L'esprit de l'escalier"?
1
What is the word for a certain melodramatic pose?
6
What is the proper English term for polycopié (de cours)?
8
Is there a word in English for the Portuguese term "saudades"?
2
A word or term for: "in another person's body"
1
The best word for "falling backwards" in the context
12
What is the best English translation for "Mittagsmenü" (German)?
1
Term for the saline equilibrium of the body?