Why is "DMV" different from a language point of view in Linguistics?

What is the speaker referring to when, talking about two phrasal verbs, they say

They may be equivalent as far as the DMV is concerned, but they're not equivalent from the point of view of language.

I looked up DMV and I think it is an initialisation of the Dependency Model with Valence, I found a reference and an explanation (of sorts) in a book titled Grammatical Inference for Computational Linguistics but despite reading its description, I still cannot get to grips with it, i.e. I don't understand.

DMV. The Dependency Model with Valence (DMV) is an unsupervised dependency parser. Instead of a one-to-many mapping between non-terminals (on the left-hand side) and terminals or non-terminals (on the right-hand-side) in, for instance, context-free grammar, dependency models are a one-to-one mapping. Essentially, dependencies describe head-dependent relationships between the words in a sentence. This results in directed acyclic graphs; for instance, like the one depicted in Figure 4.6.

Unfortunately, Figure 4.6 is missing from my preview.

Could someone please explain, in layman's terms, what DMV is and provide examples where a verb with two different prepositions can have very similar meanings, which can be equivalent to DMV, but not equivalent from a language point of view.

For example, would go round and go around OR look through and look over be equivalent to DMV but not from a language point of view? Why?

A simple way of thinking about a DMV is as a kind of tree-like representation of a parsed phrase. Here is an example taken from the Wikipedia page for "Dependency Grammar." 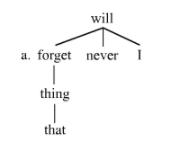 This is an "unordered tree" of the sentence:

That thing I will never forget.

However, you would get the same tree if you were parsing the sentence:

I will never forget that thing.

They may be equivalent as far as the DMV is concerned, but they're not equivalent from the point of view of language.

I'm not sure whether or not this example will help you understand the comment addressed to you without knowing more detail.

Not the answer you're looking for? Browse other questions tagged meaning terminology linguistics or ask your own question.

12
Has the Tangier island accent truly remained unchanged since the Elizabethan period?

5
Why does the verb "overlook" have such a different meaning from "oversee"?
3
Meaning of "Conceptual point of view"
0
Is there a word that means "impressionable," but from the point of view of the impresser?
3
The meaning of mathematics from an etymological point of view
2
Are there any more options for describing perspective than 1st, 2nd or 3rd?
2
How is "iff" different from "if"
0
Polygons: why are three and four different from other "sidegons"