Where are onions “melted”?

I was recently at a pub in Germany with a group of native English speakers (I am a native German speaker) and we encountered the phrase "melted onions" on the menu. "Beef steak with melted onions and vegetables" to be precise.

So essentially everyone thought that this was a wrong translation from the German "geschmolzene Zwiebeln". Only I thought that I had seen the term in English menus before.

Now I looked it up on the internet and can't seem to find a clear conclusion.

There are some sources here (e.g. NYT), that I would consider quite reliable, but I am not sure if recipe sites ever are.

So is "melted onions" a term that is actually used by native English speakers? Is it maybe common only in a part of the English speaking world? (AE?, BE?, Australian English?)

Despite its odd appearance at first glance, there are numerous instances online, including several citations in literature, which confirm melted onions' status as a side dish, a culinary equivalent of caramelized onions.

I was obliged to limit the search to "steak with melted onions" because the German dish, as described by the OP, was steak and geschmolzene (melted) Zwiebeln (onions). 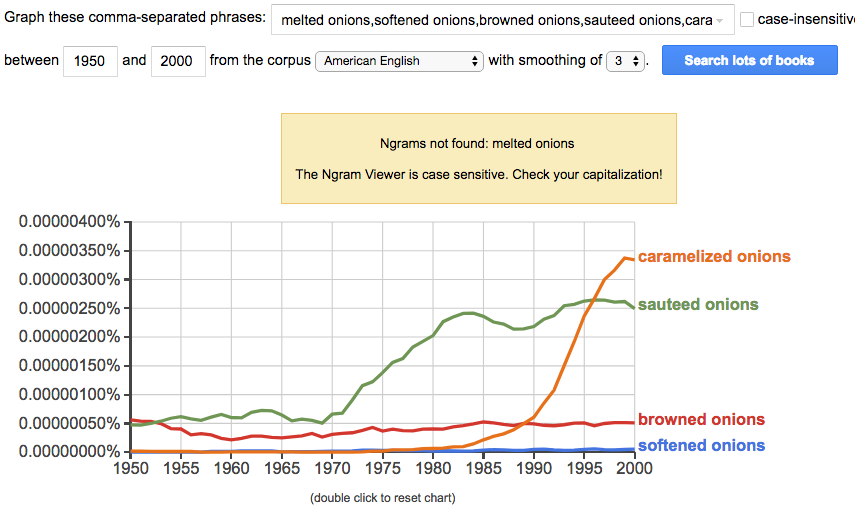 Predictably, the British English corpus fails to register "melted onions" but also, surprisingly, "softened onions". I included the British spelling caramelised to see what the results would be like.

However, over the years, I have learned to take Google's search results with a large pinch of salt. It is distinctly possible that these numbers will be significantly different in the near future, if or when Google succeeds in fixing their data that produces these estimated number of results.

The dish, steak with melted onions, produces 112 results but unfortunately, the only excerpt visible is from the recipe book, In a French Kitchen: Tales and Traditions of Everyday Home Cooking in France. (link)

I love to quickly sear flank steak for this recipe, which is so simple you'll do it with your eyes closed. Use the steak of your choice, though, and adjust the cooking time accordingly. As for the onions, you'll fall quickly, deeply in love. …

Finally, online we have:

Last but not least, the renowned British food and cookery author Hugh Fearnley-Whittingstall includes the recipe of the following dish:

The above description of a steak dish called Philly Cheese Steak omits a third ingredient with "steak and onions," which is "cheese."

It is the cheese that is melted, not the onions. So the description of the dish should be steak, melted cheese, and onions.

But "steak and melted onions" was just a (sloppy) shorthand for the above.

It's a weak translation from the traditional (and very similar) Smothered Onions recipe.

I was taught that most liver is served with “smothered onions.” To smother an onion, first saute an onion in a small amount of fat to dissipate the harsh sulfur taste and unveil a more subtle, almost sweet flavor. Then, cover and cook for five minutes, or until the onion is unresisting and palatable. Voila! Smothered onions.

Or it could be a translation of Patty Melt, another very similar dish. Patty Melt is a chopped beef patty served with sauteed onions on top.

Not the answer you're looking for? Browse other questions tagged expressions terminology american-english food or ask your own question.

9
Etymology of “Spaghetti and gravy”
7
Is the [ʊ] sound pronounced with lip rounding?
5
Is it really rude to use the terms “the john” and “the loo” in lieu of “the restroom”?
1
“To tame” for “to cultivate [vegetables, a land, etc.]” and “to domesticate (or farm) [poultry, fish, etc.]” in AmE
22
Where does “pizza pie” originate?
2
Where does one grow nuts?
12
Partially melted snow on ground
1
Adjective or noun for “uses rules that are commonly accepted even if not consistent”