What is the word for the corner where ceiling and wall meet in a house?

In a square room in a house, what is the word for the corner where one of the walls meets the ceiling?

I kept thinking it was a word like "eaves", but that turned out to be the overhang. I have googled a few things, but most of it is irrelevant about topics like mold.

I said "square room", but what technically meant was "cube room".

I said "corner where one of the walls meet the ceiling" because I was thinking of the phrase, "Stand with his nose in the corner." I've heard the word "corner" refer to BOTH the line of intersection between two planes AND the point of intersection between 3 planes, when people talk about rooms. As in, "Painting yourself into a corner."

I should have used the word "edge", because I've only heard "edge" referred to as the LINE of intersection between two planes. I think of "edge" as a more specialized word, for someone doing graph theory or geometry. "Edge" would have been a much better word to use in asking because of the reduced ambiguity.

I'm sorry for the confusion.

The terms ceiling line and floor line are used for the lines where the wall meets the ceiling and the floor, respectively. For example, the terms are used in the book Architectural Drafting for Interior Designers (by Lydia Sloan Cline): 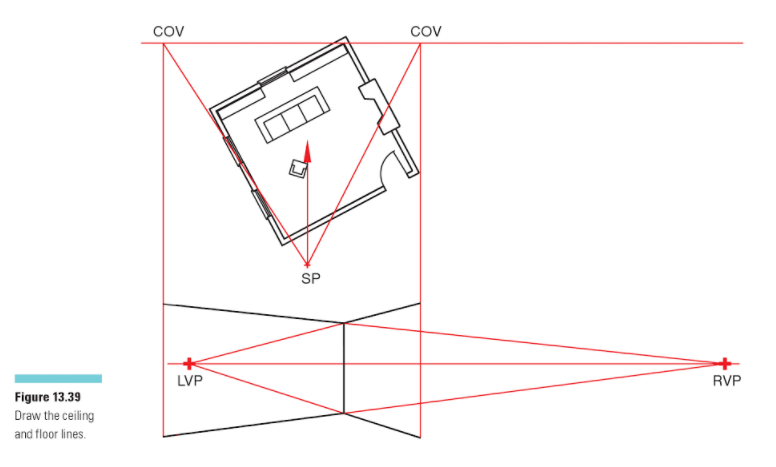 To make it more clear, I drew this diagram in Paint: 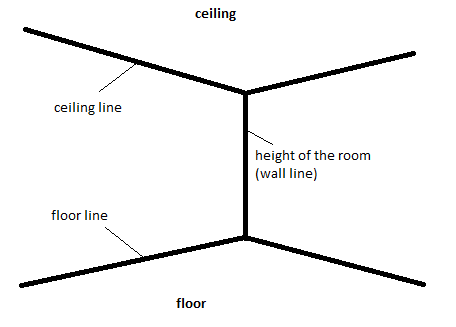 You can use the term cove or coving for the concave arched molding at the junction of a wall with a ceiling.

The definition of coving from britannica.com:

Coving, in architecture, concave molding or arched section of wall surface. An example is the curved soffit connecting the top of an exterior wall to a projecting eave. The curve typically describes a quarter-circle. The arched sections of a curved ceiling would be coving. Such a coved ceiling serves to join the vertical walls with a flat ceiling.

1 a curved underside or soffit

Note: In North America, the term crown molding is used for the molding at the junction of an interior wall and ceiling.

The cornice area is where walls and ceilings join.

I'm a plasterer; it's called the arris (a junction where two flat surfaces meet).

And a more detailed explanation:

In architecture, an arris is the sharp edge formed by the intersection of two surfaces, such as the corner of a masonry unit; the edge of a timber in timber framing; the junction between two planes of plaster or any intersection of divergent architectural details. Also the raised edges which separate the flutings in a Doric column.

In Australia we're pretty bloody straight. What I mean is we call a spade a spade right? Cornices are the the decorative mouldings that run along the the join between the ceiling and the roof (interior). Exterior overhangs ONLY are called eaves. And the fellow above is correct. Skirting boards are the joins where the door frames meet the well door frames. If you have picture frames as well. Good luck. IMHO they should be left wooden or stained according to the choice of paint you choose above the picture rail and below. No I'm not an architect and I'm not a painter. Just a renovater. Oh BTW I do speak French but Arris is not a word I learned.

4
More appropriate word for a "shape" of environment
3
Is there a word or phrase to describe the aging of graphics technology?
15
Is there a common word for floor and ceiling?
1
AmEng equivalent for BrEng "circus"
2
Name for the ceiling support rods
2
What is the term used to describe the space under a roof that joins two buildings?
0
Word for the "break" where two sides of a wrapping meet
37
Is there a non-medical name for the curve where index finger and thumb meet?
1
Road Direction Terms
2
Term for wall corner facing out?