Why isn't the T in “relative” flapped?

One very common phenomenon in north-American English is T flapping when the T comes between two vowels (or semi-vowels, like the R sound) on an unstressed syllable.

This "rule" is almost mathematical, I didn't hear any T pronounced as /t/ in this environment until I heard north-Americans say the word relative(s).

I went to youglish which gives you youtube videos according to some word and dialect, and so far all of the speakers from America say /ɹɛlətɪv/ with an un-aspirated /t/ sound.

After @Araucaria gave his answer, I decided to try more speakers, and here I found some:

In conclusion, most of the Americans don't flap their T in "relative", they pronounce it either aspirated or non aspirated. A very small minority do however, flap their T there.

I guess all of the answers given here are correct. Americans who don't flap their T in "relative" pronounce this syllable with a secondary stress, while American who do flap their T there obviously don't. I guess the amount of "stress" put there depends on the regional accent of the speaker.

I also guess that according to the "General American" standard, the T shouldn't be flapped there, as dictionaries do mark the tiv syllable as having a secondary stress.

There's no doubt at all that the /t/ in relative may be flapped in standard American English. Indeed many dictionaries include a flapped /t/ in their transcriptions and give audio examples with flapped /t/'s too.

Here for example is the transcription from Cambridge Dictionaries:

And here is the transcription from Oxford Dictionaries clearly indicating a flap for a /t/, where their convention is to represent flapped-/t/ with 'd':

In spite of the above, the /t/ in relative is only optionally flapped in this environment. Many speakers may not do so, and others my only use flapped /t/ in certain circumstances, for instance in connected speech as opposed to when giving a citation form. For why, see the full answer below.

Here is an excerpt from a paper by Alice Turk, Professor of Linguistic Phonetics at Edinburgh University, concerning the phonology of flaps in American English: 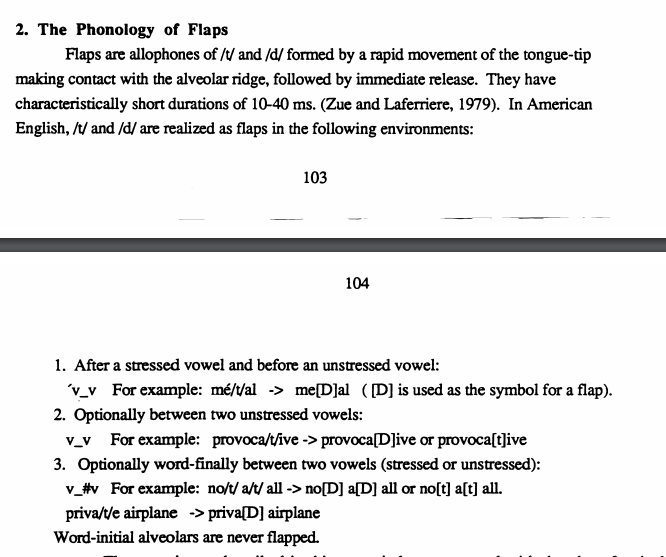 As described by Alice Turk, the flapping of /t/ in this environment is optional. This is well-attested in the comments here, where several respondents point out either that this /t/ is flapped, or that it can be.

In short then, [ɹɛləɾɪv] doesn't sound odd at all. Whether an individual happens to flap a /t/ in this sort of environment will depend on many factors: the personal habits and predilections of the speaker, whether they are saying the word alone or in a sentence, the speed at which they are talking, and so on and so forth.

No printed dictionaries give a transcription of relative with a secondary stress.

It has been suggested elsewhere here that the last syllable of relative has secondary stress. It doesn't, at least not in the normal meaning of the term.

In words with secondary stress, it's possible to have a rhythmic stress on both stressed syllables:

In the utterance above we can have a full stress on each of the three bolded syllables, including both the first and third syllable of absolutely. We cannot do this kind of thing with the last syllable of relative

The word relative /ˈɹɛləˌtɪv/ often has weak secondary stress on the /ɪ/, which blocks flapping.

This is the same reason that the pronunciation /ˈɹɛlətəv/ sounds strange. People with the weak vowel merger generally replace /ɪ/ in unstressed vowels with /ə/. And if you live in the U.S., even if you don't have this merger, you are probably familiar enough with this merger that it doesn't sound strange. But /ˈɹɛlətəv/ and /ˈɹɛləɾɪv/ sound weird to me because the /ɪ/ has weak secondary stress—weak because it's a weaker stress than most things that are classified as secondary stress in dictionaries.

As other people have pointed out, in fact the "t" in "relative" can be voiced and flapped/tapped in American English.

"Stress" is a word that different people use in different ways. It seems clear to me that an English word pronounced in isolation will have exactly one syllable with the "primary stress" (although Araucaria suggests in the comments that even this is debatable).

Beyond that, I think theories differ somewhat in the terminology used to describe stress, accent, vowel reduction and consonant lenition.

What is "stress" phonetically?

I want to briefly discuss the phonetic correlates of stress since some of the comments have brought up differences in how different people "hear" stress in words.

From this, it sounds like primary stress can in general be identified by the higher pitch (F0) and greater length (duration) of the syllable as well as the higher volume (amplitude) relative to the surrounding syllables. But syllables with secondary stress don't necessarily stand out in terms of pitch and duration from unstressed syllables.

Araucaria's comments below reminded me that it may actually not be correct to say that pitch is directly associated with primary stress per se. Rather, one viewpoint seems to be that high pitch is a realization in English of accent, something that is related to but distinct from stress.

A syllable with primary stress may receive pitch accent, but doesn't necessarily. This is my understanding after skimming "Sentential Prominence in English" by Carlos Gussenhoven, something that I hope to read more thoroughly in the future.

Although Gussenhoven distinguishes between the concept of pitch accent and the concept of stress, he does treat "primary stress" as a valid concept that is used in his formulation of accentuation rules. He says

every word is assumed to have primary stress, stress level “1,” on the syllable with main word stress (2780)

Accentuation is in part morphologically determined: SALamander has an unaccentable stressed syllable in penultimate position (2802)

My impression based on this—although it might very well be wrong—is that the "primary stress" of a word could be defined empirically as the last accentable stressed syllable in the word.

What is "secondary stress" and where does it occur in English?

According to Balogné Bérces Katalin's "The Pronunciation of English", the term "secondary stress" is correctly applied only to stressed syllables that occur before the primary-stressed syllable (p. 113). This definition seems to be related to a theoretical idea that all English words are stressed on the rightmost major stress ("prominence of the right edge") (p. 113). It's not clear to me if there is actually any way to differentiate syllables with secondary stress from syllables with unreduced vowels and some lower level of stress using phonetic as opposed to phonological criteria.

Some sources do seem to recognize the presence of secondary stress on syllables after the primary stressed syllable, but I haven't been able to find a good description of how this alternative terminological system works. Wells has another blog post "irritating hamburgers" where he writes:

native speakers tend to perceive the penultimate syllable [of "irritating"], teɪt, as being more strongly ‘stressed’ than the final syllable ɪŋ. But what they want to call ‘stress’ is arguably no more than a way of saying that the vowel is one of the strong ones. Actual rhythmic beats following the main word stress accent are all pretty optional, which is why the British tradition is not to show any secondary stress in words like this: ˈɪrɪteɪtɪŋ, not *ˈɪrɪˌteɪtɪŋ. The alternative tradition, usually followed in the States and (for example) Japan, is to recognize a secondary stress on the penultimate, írritàting.

I don't know if there is any theoretical relevance to using the term "secondary stress" to refer to syllables like this as opposed to the term Wells uses, "strong vowel", or the term Balogné Bérces uses, "tertiary stress" (discussed below).

The absence of vowel reduction in syllables in other contexts than the ones mentioned above is sometimes taken to be a sign of some third kind of stress (not primary or secondary stress). Balogné Bérces call it "tertiary stress", and says that it can alternatively be called "minor stress" (p. 111).

Some analysts (particularly Americans) argue in the other direction, claiming that the presence of a strong vowel is sufficient evidence that the syllable in question is stressed. In the British tradition we regard them as unstressed.

Wells also mentions in this post that the American English t-flapping rule generally only operates when the following vowel is weak. However, the Bert Vaux paper that KarlG's answer links to indicates that it is pretty complicated and difficult to formulate a complete description of when t-voicing/flapping/tapping occurs in American English, so it seems possible that Wells's analysis has some issues.

In Wells's analysis, ɪ in unstressed syllables can be strong or weak, but it can be hard to figure out which one it is. Wells uses the presence of t-flapping in "emphatic" as evidence that this word has a weak vowel in the final syllable.

The variability between the pronunciation of "relative" with lenited, voiced, "flapped" or "tapped" t and the pronunciation with voiceless, less lenis t could be explained as a consequence of speakers varying between using "strong" ɪ and "weak" ɪ in the last syllable (or in Balogné Bérces's phraseology, varying between having tertiary stress and zero stess on the last syllable). How to explain that variation (which as Araucaria points out may exist between utterances made by the same speaker at different times, as well as between utterances made by different speakers) I don't know.

By Well's account, the use of a strong or weak vowel in a word is not necessarily fixed, but can vary depending on the circumstances. For example, reduced pronunciations of function words have weak vowels, while emphatic pronunciations have strong vowels. I think the variation of /oʊ/ and /ə/ in words like "progression" would fall under the same rubric.

Bert Vaux contrasts, among other words, "capitalistic," which is flapped, and "militaristic," which is not. If you read the linked article, you'll realize that most any attempt to establish rules for when American English uses the flap and when not seems doomed to failure.

My guess, however, is that if you asked Americans to say:

Mother hates having all the relatives over for Thanksgiving.

there would be ample flapping, but not when “a is relative to b” (which has “relative” as an adjective as opposed to its use as a noun).

As a native American English speaker, in casual/faster speech I absolutely flap the "t" in "relative". However, in academic or formal settings, or if I was trying to enunciate the word for clarity, I would pronounce the t as /t/.

Not the answer you're looking for? Browse other questions tagged american-english pronunciation flapping or ask your own question.

6
The american R sound
3
Is the split in pronunciation of “detail” regional, semantic, or irrelevant?
0
Could you clarify this “Intervocalic Consonant” theory: “consonants are syllabified with the more strongly stressed of two flanking syllables.”?
12
Is there a correct pronunciation for the word “idempotent”?
1
Are there other words in American English that use the same vowel sound as the “as” in “Pasta”?
4
Am I wrong when I think that I can hear the two different ways they pronounce “flap T”?
8
/z/ + /ð/ = /zdð/?
5
Why is “medicine” pronounced differently?