Difference between "socket" and "outlet"

While translating a technical document I began thinking about socket and outlet. It seems like they're mostly interchangeable. Is that correct? Or is there a difference between the two?

Neither of these examples is intended to imply the power doesn't come out of a light socket or that a plug isn't plugged into a power outlet. Those are facts but not related to the terms in question themselves.

If you are in any doubt that context is not enough, just use light socket and power outlet.

I want to add one more comment, eight years later. It's also not usual to call the thing that's installed in your wall a receptacle. In this context, usually the speaker is referring the literal piece of equipment installed there that receives the plug. In other words, you're mostly talking about what the form of the thing is (a hole for a plug) and not what it does (outputs power).

In British English, 'socket' is the word that normally describes the place in the wall where you put a plug to connect to the electricity supply. 'Outlet' might conceivably be used in some technical contexts, but it has other meanings too and could be ambiguous. 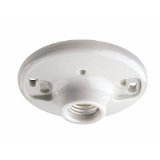 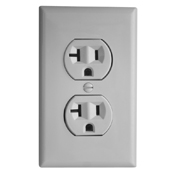 This really does depend on your dialect. This is the first time I have seen this meaning of outlet. I've never heard it before. So if you're writing for a British or Irish audience, socket is your only option.

4
"receptacle" vs. "outlet" in AmEng
1
Socket or outlet, which one do you use when explaining to a child?