Why do we need different auxiliary verbs (“is”, “are”, “am”) for different pronouns? [duplicate]

No why, no purpose; just history

First off, you’re mistaken to tie these verb-forms to pronouns rather than to what we call “grammatical persons”. Pronouns are but an ancillary matter that make it easier to demonstrate those.

It’s just something we inherited from our ancestors. Think of it as being in our genes — linguistic genes, that is. There’s no “why” possible. It’s just genetics, is all it is. Asking why makes no more sense than someone asking you why you happen to have brown hair and brown eyes instead of blond hair and blue eyes “like normal people”. There is no reason, or at least not one that your own parentage cannot explain.

Having inflections is simply a basic property of Indo-European languages, languages today spoken by something like three and a half billion people all around the world, not just in Eurasia where they originated.

The reason a verb agrees with its subject in English is rooted in prehistoric Proto-Indo-European, something all Indo-European languages inherited genetically and naturally.

John Lawler has prodded me to explain a bit more about the curious set of inflections for the verb be in Modern English. The reason the inflections look so odd is because of what’s called suppletion, something that happens when one form of one verb takes the place of some form of a completely different verb, the way we see with go becoming went in the past, a form borrowed from the verb wend.

Be is a “special” verb in English. It’s our most common verb, for one, which probably explains some of its peculiarities. As you notice, it is morphologically special, too. It distinguishes between first and second and third person forms, the only verb to do so. It is also the only verb that distinguishes the singular and plural in the past tense: was for the singular and were for the plural — and in Early Modern English, wert for the now-archaic second person singular thou (and there were other spellings of that one, too). It even has a special form were that’s used for unreal hypotheticals no matter whether singular or plural. No other verb does that either.

The odd mixture of inflected forms is due to suppletion, a merger of forms from three other, older verbs. The Wiktionary entry for Modern English be explains that as follows:

From Middle English been (“to be”). The various forms have three separate origins, which were mixed together at various times in the history of English.

In fact, we could see this in Old English. The Wiktionary entry for Old English beon (ModE be) states:

The verb "to be" in Old English was suppletive, and used forms from at least three different roots. There were two distinct present stems, for which wesan and bēon were the two infinitive forms. The present bēon was used to express permanent truths (the "gnomic present"), while wesan was used for the present participle and the preterite. They both shared the same past tense forms.

If you look at the inflection tables for Old English bēon and wesan, you’ll see how the different inflections now used in Modern English were drawn from different original verbs: 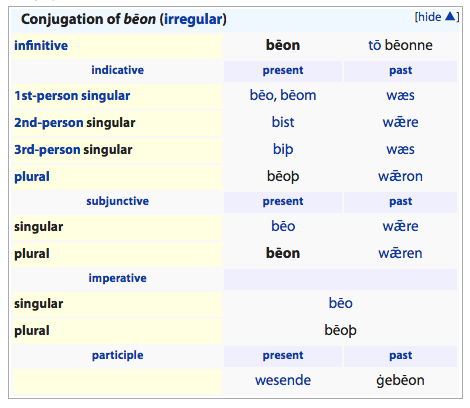 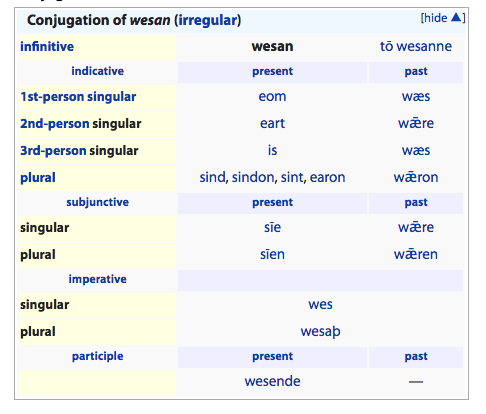 Compare the inflections of the Modern German verb sein because it has many of the forms that we saw in Old English but not since, and also because the German version’s inflections are still a jumble of forms there, too.

Yes, that’s pretty mixed up. The thing is that nobody “did” something to bring this situation about. Language doesn’t work that way.

Not the answer you're looking for? Browse other questions tagged pronouns auxiliary-verbs inflectional-morphology or ask your own question.

24
Why are so many important verbs irregular?
1
Is “I be”, grammatically correct?

15
Is “so” a pronoun?
1
Pronouns for collective nouns (British and American)
4
Auxiliary verbs
4
Are modal verbs and auxiliary verbs actually verbs?
0
Object pronouns+verbs+ing
0
Auxiliary Verbs in Past and Present
1
After third person pronouns: verbs with or without “-s”? (special case involving “if”)