What do you call the new pattern that we perceive in the relative movement of patterned objects?

Sometimes a purely static image will appear to be moving because of some design feature. 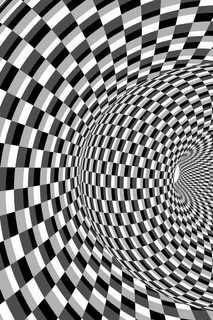 That’s not what I’m asking about.

For example, sometimes as you pass a fenced yard along the north edge, you look at the north face of the fence, and through the gaps in the fence you can see the west face of the fence. As you pass, the two faces seem to move with respect to each other (a phenomenon known as parallax – also not exactly what I’m asking about) and something weird seems to happen. This weird thing – exactly what I’m talking about – seems to be a pattern of light and dark with contours different from those of the real fence. You can sometimes see curves where you know all of the real objects are straight, and if you just stop moving for a moment the illusion also stops and you see things as they are.

I believe that I’ve had a similar experience with hubcaps and with circular fans, which can appear to spin backwards or at the wrong speed.

I would be interested in any clear name or description of this experience, and further examples if you've got 'em.

Moiré patterns were quite a large part of the op art {not to be confused with pop art} movement of the 1960s.

The Cambridge Dictionary offers kaleidoscopic. Its definition and bouquet of thesaurus connections:

quickly changing from one thing to another

The Merriam-Webster definition takes us in a similar direction:

Definition of kaleidoscope 1 : an instrument containing loose bits of colored material (such as glass or plastic) between two flat plates and two plane mirrors so placed that changes of position of the bits of material are reflected in an endless variety of patterns 2 : something resembling a kaleidoscope: such as a : a variegated changing pattern or scene

b : a succession of changing phases or actions

Another possible direction, suggested by the fence-post and hubcap images described, might be stroboscopic (see the M-W definition ) which could describe the apparent motion of an object viewed in a rapidly intermittent fashion.

Not the answer you're looking for? Browse other questions tagged single-word-requests science or ask your own question.