Is there a proper term for the 'arms' of a star?

I have the need to describe, in a technical document, the particular portion of a star here highlighted red (or any of the other like areas): 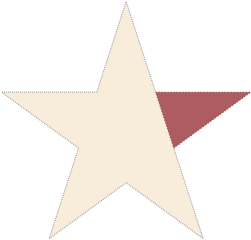 The width of each …? shall be eight units at the point where they meet.

While in the title of this question I describe it as an arm, given the formal context of my intended usage, I'm loath to use such, as it seems an informal or slang term. Likewise, as I will be describing the dimensions of this section, using a term such as point seems inappropriate, as I would typically view that as referring to the vertex itself, not the area between the convex and concave vertices.

I've done some searches for arm and lobe, but can't seem to find any examples of their usage in this context. Is there a formal, proper, or technical term for this particular area of a star?

In heraldry they are referred to as "rays".

I think I've heard them referred to as limbs. The Oxford English Dictionary (subscription required) gives the following definition which I think applies well to this situation:

4b) In various uses, chiefly of material things and more or less technical: A projecting section of a building, e.g. the outworks of a castle; one of the four branches composing a cross; ... a spur of a mountain range; ...

Admittedly, neither the definition nor the usage examples mention stars explicitly. Other dictionaries give similar definitions.

Also, starfish are described as having limbs and, while this is obviously by analogy with arms and legs, it seems reasonable to use the same word for non-living stars.

Note that astronomers use the term "limb" to refer to the whole edge of the visible round disc of an actual star such as the Sun – thanks to @Michael Seifert for pointing this out. I don't think this would be likely to cause confusion.

Not the answer you're looking for? Browse other questions tagged single-word-requests technical shapes or ask your own question.

8
What are the proper terms for these star shapes?
11
What is the term for words that have changed meaning over time?
2
Is the word "radial" in proper usage if I want to describe a star-like structure?
9
Term for inefficiency inherent in hierarchical allocation
7
A term for the object of insincere justification
3
Is there a word for a queue or buffer of orders in a restaurant?
2
Term for common or accepted usage of how a language is used
1
Is there a word to describe the phenomenon of "passive recollection"?
2
Term for wall corner facing out?