What's the most common expression for “rovesciata” in the UK?

On Wikipedia, I see a few options that can be used for the Italian word "rovesciata":

The 1st and 3rd expressions exist in Oxford's dictionary, but the 2nd one doesn't. In addition, the origin of "bicycle kick" refers to an American newspaper.

I also searched on BBC, but it didn't hint much.

Which one is the most common expression in the UK?

All the given definitions fit, according to Wikipedia:

A bicycle kick, also known as an overhead kick or scissors kick, is a physical move in association football. It is achieved by throwing the body backward up into the air, making a shearing movement with the lower limbs to get one leg in front of the other in order to strike an airborne ball rearwards above head level, without resting on the ground. 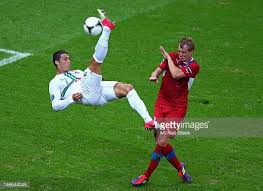 The term "bicycle kick" describes the action of the legs while the body is in mid-air, resembling the pedalling of a bicycle. The manoeuvre is also called an "overhead kick", which refers to the ball being kicked above the head or a "scissors kick", reflecting the movement of two scissor blades coming together. Some authors differentiate the "scissors kick" as similar to a bicycle kick, but done sideways or at an angle; other authors consider them to be the same move.

Zlatan Ibrahimovic claims bicycle kick against England is not the best goal he has ever scored.

Zlatan Ibrahimovic claimed that his extraordinary scissor-kick fourth goal wasn't even the best of the night as Sweden beat England 4-2 in an international friendly.

Not the answer you're looking for? Browse other questions tagged expressions british-english sports or ask your own question.