Origin of the expression 'glass half full or half empty'

I am not native English speaker but in my native language (French) and local language (German) the expression about seeing the glass 'half full' or 'half empty' also exists. I then also noticed that the expressions exists in almost every languages.

Does anyone know a bit of history of this expression? I am mostly interested in the origins, how it spread, and by what famous occasion was it is used.

the Wikipedia page is not very rich of such information, neither is Google.

A quick scan points to Ronald Reagan as the source of this expressio, when he stated in a press conference on February 21, 1985

You can say it's like saying, is the glass half full or half empty?

However, it seems the Peace Corps already used it in an advertisement campaign in the 1960s: 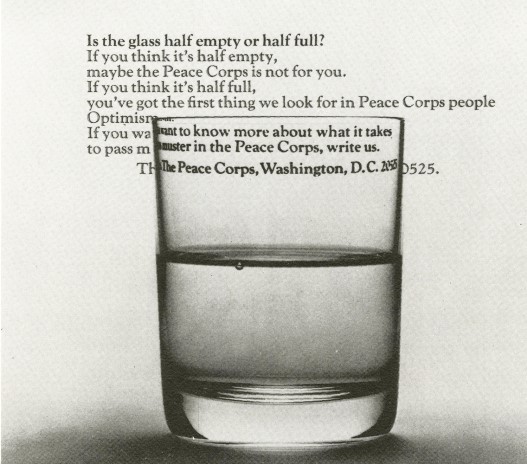 Delving a bit deeper, it seems the expression is even older: here is a version with a half full/empty bottle from 1933.

I'm quoting the quote from the linguistlist bulletinboard:

Two men were looking at a bottle of milk. Said one with a groan,
"The bottle is half empty." Said the other with a grin, "The bottle
is half full." The first belonged to the courters of disasters,
forever bemoaning their losses; the second to the invincibles who
win by counting their blessings.
source: Los Angeles Times, Feb 26, 1933, p. 14

As user Peremensoe comments on the straight dope:

The rather wordy explanation is suggestive of an early use.

Are people perhaps talking about the wrong type of glass? Could it be an hour glass or similar type of glass used on sailing ships to tell periods of time. A weary sailor looks at the glass and asks " is the glass half empty yet"?

PatrickPatrick
1
1
Add a comment  |
Highly active question. Earn 10 reputation (not counting the association bonus) in order to answer this question. The reputation requirement helps protect this question from spam and non-answer activity.

Not the answer you're looking for? Browse other questions tagged etymology expressions proverbs phrase-origin or ask your own question.