What is "Face control" in English?

Does English have the phrase "face control"?

I've found in the dictionary that it's a Russian concept and was taken from English not as a concept, but as two separate words. It refers to people who stand near the entrance and check if those who come in are of suitable appearance.

What do you call it in English? I'm looking for the name of the activity which would fit into a sentence like "the burly guy was assigned to face control at the entrance"; in this sentence it's a noun which names what he is doing.

b :a system for examining and separating into different groups

A window screen lets air in and keeps insects out; screeners at night clubs let in the kinds of people the management likes and exclude those they presumably don't. But night-club bouncers, Russian and elsewhere, are usually responsible for being able to physically block or control difficult clients.

Airport security is a system of screening--excluding from boarding areas those without tickets, acceptable identification, and so forth.

Many social events have screeners at the door (or at a table with name tags) who ensure that people coming in have been invited. To attend a social event to which one is not invited is crashing a party.

The screeners are not always--in fact usually not--responsible for controlling physical entry; most often there's someone else they call--police, security guards, someone else who performs the role of the bouncer.

EDIT: However, reading @Laurel's answer and the Wikipedia page linked in the answer, Russian "face control" means controlling the "public face" of the establishment by screening the clientele. 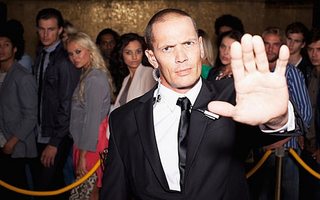 The (burly) bouncer at the door allowed people to enter and barred those who couldn't.

Wikipedia describes the position as

A bouncer (also known as a doorman, door supervisor or cooler) is a type of security guard, employed at venues such as bars, nightclubs, stripclubs or concerts. A bouncer's duties are to provide security, check legal age, to refuse entry for intoxicated persons, and to deal with aggressive behavior or non-compliance with statutory or establishment rules.

In 1875, the term bounce was used as a verb to signify the act of physically throwing someone out of an establishment or venue. From the same Wikipedia page, there is an excerpt from the novel The Young Outlaw, by Horatio Alger, Jr.

"Here, Peter, you waited on this young man, didn't you?" "Yes, sir." "He hasn't paid for his breakfast, and pretends he hasn't got any money. Bounce him!" If Sam was ignorant of the meaning of the word 'bounce,' he was soon enlightened. The waiter seized him by the collar, before he knew what was going to happen, pushed him to the door, and then, lifting his foot by a well-directed kick, landed him across the sidewalk into the street. This proceeding was followed by derisive laughter from the other waiters who had gathered near the door, and it was echoed by two street urchins outside, who witnessed Sam's ignominious exit from the restaurant. Sam staggered from the force of the bouncing, and felt disgraced and humiliated to think that the waiter who had been so respectful and attentive should have inflicted upon him such an indignity, which he had no power to resent.

From Google books, the word allow is used several times, as well as the term scrutinize, in the Bouncer Training Guide, by the National Nightclub Security Council. The OP's sample sentence would then read,

The burly guy was assigned to scrutinize people at the entrance.

English does not have the phrase "face control." The person who performs that role is called a bouncer. Some jurisdictions require that the person who wishes to be employed in such a role be licensed. Different names are given to persons who obtain such a license. "Bouncer" is a colloquial term. "Nightclub security officer" is a more formal way of putting this, but unless you're describing court proceedings its use is excessively formal.

The phrase you're talking about seems to be "Фейс контроль", which can be transliterated as "feis kontrol".

While Russian is clearly using the English words "control" and "face", these words were not a phrase in English at the time it was coined. I do not speak Russian, so I'm not really sure when exactly it was coined. I did find this article in Russian from 2001 that uses the term, so it goes back at least that far.

At some point in time after the phrase was established in Russian, it entered English to describe how clubs in Russia (and other former Soviet countries) won't let people in if they don't fit the demographic they want. The earliest attestation I can find is 2003:

What is the club scene like in Moscow? Is it expensive and what is the vibe like? — guinessforstrength

Don't know what you consider expensive. More important that expense though is probably face control - lots of places won't let you in if you don't looook right regardless of whether you flash a big roll of bills. — everbrite

While the term has also been used in the NY Times, for example, it always refers to Russian (or former Soviet) clubs. The vast majority of English speakers will not know what you mean by this term. A well-known term for the people that perform this duty is "bouncer".

The English language Wikipedia summarizes this quite nicely:

The rare occasional use of this term in English can be considered a linguistic reborrowing via the Russian pseudo-anglicism фейсконтроль (feiskontrol).

5
Is there a single word that describes someone who hates themself? (Antonym of narcissist)
2
Redundant command as an affirmation of authority?
1
How to write "looking suspicious" in a way that is not ambiguous
1
I am looking for a word that can be used to describe a person who can switch bodies with another human
2
so called without the negative connotations
4
What are the indigenous English words for a prostitute?
5
Is there a word or phrase that means 'works but not for the reason we expect it to'?
4
What do you call overtaking after overtakers? Not necessarily a single word, a phrase will do