What to call a very unlikely combination or construction?

In Romanian, there are words and phrases like "struțo-cămilă" (ostricho-camel) or "magaoaie" (donkeysheep). They both designate comical combinations but while the first one can include combinations that can actually work very well (although the journalists are using it mainly to criticise strange combinations), the second one designates a combination or construction something big, ugly, hard to move and unworkable.

Another word is "crocofant" (crocodil+elefant) but that's just a writer's invention and largely unknown.

I'm not looking only for portmanteaus, also two or three word combinations are good. And they don't have to involve animals. There might be a vast number of such words/phrases, therefore the most used are good enough.

What kind of similar English words or phrases exist?

In America, we "have" the jackalope, a combination of a jackrabbit and an antelope. It is a creature that resembles a rabbit with antelope horns.

It is referred to as :

In a more formal context, it might be termed a "chimera"

Something that is greatly desired but difficult or impossible to find 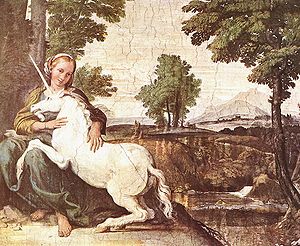 The feminist slogan "A woman needs a man like a fish needs a bicycle," coined by Irina Dunn in 1970, was a variation on an existing form. In turn, it works and is used in other contexts.

If you want an idiomatic expression you can say "like chalk and cheese". In plain English you can say a mismatched, ill-matched, poles apart, worlds apart, like day and night, etc.If you want to sound a little scientific, you can say "an asymmetric pair"!

Snark (Snake+Shark) was coined by Lewis Carrol with the "The Hunt for the Snark"and means an imaginary animal. Not to be confused with Snarky (meaning irritable or short-tempered) which seems to have no relation.

Not animal-related but a "chocolate teapot" sprang to mind when I read your question. It comes up in phrases like "that's as useful as a chocolate teapot". Clearly that would be an unlikely combination given that the chocolate would melt with the heat of the tea.