Stepfamily, Cousins and Other Ancestries

What is the relationship between me and...

I found this image: 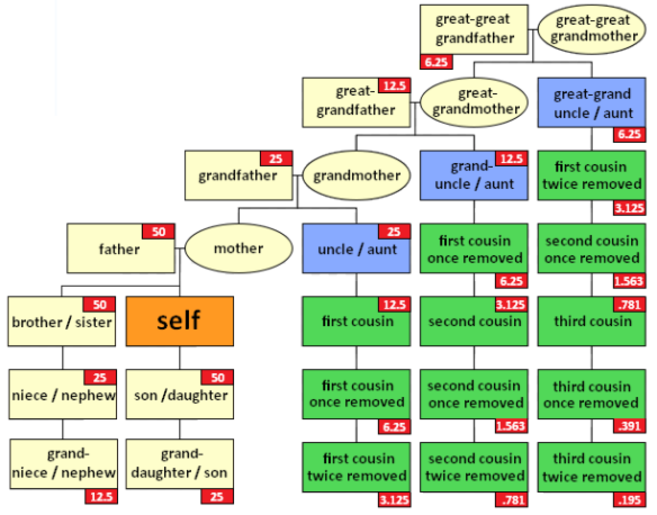 but I'm still confused what the relationship is.

Is "first cousin" and "cousin" the same? Are there other (common) kinship terms I should know?

A graphic, no matter how crude, will benefit me the greatest (as opposed to a block of text).

We can't really tell you what your relationship with your (generic) cousin is if you don't tell us how you're related to them. Are they the child of your aunt or uncle? If this is the case, yes, they are your "first cousin". If they are the child of your grand aunt or uncle or the grandchild of the same, they will still be generically your cousin, but they will be specifically your "first cousin once removed" or "second cousin".

In general, my personal experience is that these specific terms are rarely used. For simplicity, in polite conversation when precision is unnecessary, we call anyone who we have a relationship with who could be described by one of those green boxes as "cousin".

As to your stepson, he would not technically appear on that chart as that chart is specifically designed to refer to people who are genetically connected to you. The red boxes indicate the percentage of shared DNA you have with each other. You share no DNA with your step son. In terms of familial connections, though, your stepson is in the same position as your son/daughter would be.

Note, personally, I've always referred to the person labeled in the chart as "grandaunt/granduncle" as my "great aunt", skipping the "grand" entirely.

Much of this is quite nicely explained in this lovely CGP Grey video. It's way better than a graphic.

Not the answer you're looking for? Browse other questions tagged kinship-terms or ask your own question.